Trending Now
You are at:Home»Lifestyle»Hey, You Should Get Out More

Darius Sasser, an Antioch University Santa Barbara student, has recently returned from a trip to Europe, but his intentions for the trip were not your standard student studying abroad. Darius has recently started his own company with his friend Steven Wellbrock called “You Should Get Out More.”

The website for the new company not only allows users to book their flights and hotels, like other travel sites, it also allows for people to connect and meet others that are traveling in that area. The site also has a unique feature where it maps out the “hot and cool” places to eat and adventure in that area. Finally, inspired by the creator himself, the site allows for users to take out travel loans. Darius says this is directly related to his travel experience, and being a young student, he understands the disconnect between wanting to travel and having the available funds to do so.

“‘You Should Get Out More’ is a traveling platform that encourages individuals to travel, experience, connect, and share,” said Darius.

Darius explains how his inspiration for the company really began when he started traveling himself and had absolutely no clue where he was going and what he was doing, a very common place a lot of young travelers find themselves. He started using common sites like TripAdvisor and Yelp, but he found them to be old and outdated, which is anything but Darius’ style. 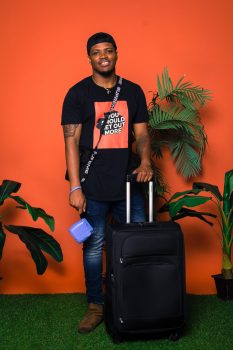 “I also wanted to inspire people where I’m from that it’s possible to travel and see new things,” said Darius. “There’s a whole world out there.”

Darius is the first person to ever go to college in his family and the first in years to graduate high school, but this only encouraged him to drive and thrive for more. He is from East Oakland, California and was raised by a single mother and is the youngest of five kids. With a full household at home, his mother worked multiple jobs in order to provide for the family. Darius explains how this really inspired him and rubbed off on him. He started his own “candy-selling business” at school and this was not the end of his entrepreneurial adventures.

“I wasn’t very good at school,” said Darius. “I couldn’t read very well and had ADHD, and as I got older things only got harder.”

Darius and his friends started getting in a lot of trouble growing up in Oakland and this had a huge impact on his life, especially with his experience in school. In 2017, his close friend was shot and killed in a drive by. Later that year, his cousin was also shot and killed in a robbery attempt. Darius had made plans with his friend Taylor to start traveling and get out of their hometown of Oakland. When he died, Darius was in shock, but it wasn’t until his cousin passed as well that really made him realize he needed to change his future.

“You are a product of your own environment so if all you see growing up is poverty it’s hard to see outside that,” explained Darius when asked about his inspiration for starting his company, “I just want everyone to have a fighting chance.”

Darius moved to Santa Barbara almost immediately and lived with a good friend until he could get on his feet. All throughout his education, back home or in Santa Barbara, he has always been talented with graphic design, a skill that in this day of age has its weight in gold. He also has gained a lot of knowledge and expertise about design and branding, and his class at AUSB “Brand Development,” with adjunct faculty member and AUSB alum Sean Pratt, really helped him develop his idea for the company even further.

“Darius was a great student. He was eager to learn and participate,” said Pratt. “He showed a strong class presence and always shared his insights. He is a great communicator and excelled in public speaking and keeping people engaged.”

To keep the company growing and successful, Darius plans to continue partnering with businesses and gaining sponsorships. He explained that his main goal is to be able to offer free flights or hotel stays to individuals who may not be able to ever afford the luxury of traveling. Over his 30 day trip to Europe, the site gained 408 accounts created, 49 hotels and flights booked and the company received 27 travel loans.

This is only the beginning for Darius and his company and his only question for you is— will you get out more?