Trending Now
You are at:Home»Campus News»Student Profiles»How Courage Can Prevail In The Darkest Of Times

Do you remember those summer days when you were little, spent only to play and laugh – those days when you had no troubles, or preoccupations on your mind? Try to remember because this tale begins exactly on that day. It begins as most of  stories do, with just a little boy, who we will call Lorenz, enjoying his last days of summer before going back to school. He did not know it yet, but that day would have a significant impact on who that boy was to become. As usual Lorenz, during his summer breaks, used to play tennis at a place near his house, where he could enjoy his summer with his friends by playing, swimming, or just messing around as every kid does when they are five years old.

However, that specific day, his parents, Sandra and Umberto, had a business meeting in a city which was three hours away from their hometown. Lorenz, maybe because he wanted to prove that he was older than he was, decided to not go with them. His parents agreed, based on the fact Lorenz would would spend his day playing tennis just a minute away from the house and then the babysitter would pick him up and care form until their return. That morning they left early with no troubles on their mind. Five o’clock arrived and so Lorenz, with his new babysitter, started to walk home. Nothing could have seemed better on that day, the Italian sun was shining down on their heads, and they were both in a very happy mood. It was only the quiet before the storm. As soon as Lorenz and his babysitter arrived home, the little boy, decided to release his Rottweiler from its chain in order to play with it. Lorenz had a special attachment to the dog, known as Jock, having grown up with it, he greatly enjoyed spending time playing and then falling asleep on the grass alongside the dog.
However, Umberto ( his father ) used to connect Jock to a leash so that Lorenz wouldn’t release it when he wasn’t at home because it could have been dangerous.

“I was there that day, I saw everything but I couldn’t do anything to save that child, as I couldn’t help the dog when it left himself dying afterwards.”

He couldn’t have been more right. That day, Lorenz, decided to disobey his father, maybe to prove something, and he released the dog from its chain. The dog immediately started to run around the garden, euphoric about being free again, so Lorenz chased him and they were having fun playing together. However, five minutes later the babysitter, who was inside of the house cooking, entered the garden to see what Lorenz was doing, and that point the irreparable happened. The babysitter, who had just started her job panicked, as she had never seen the massive black Rottweiler before. She claimed on the interview with Lorenz’s parents that she wasn’t scared of dogs and so she got hired. She lied. That day, when she saw Jock for the first time in front of her she started to scream and reached for a piece of wood parading it in front of the dog’s face, consequently Jock started to aggressively bark at the babysitter. Lorenz, who was in the very end of the garden, saw what was happening, and so started to run toward Jock and the babysitter to calm both down.

He did not know it yet, but each step he was taking toward the babysitter and the dog it was a step toward something that no one could have ever been prepared for. Jock turned back to see Lorenz, and as soon as he turned his head, the little boy, fell to the ground hitting his head on a rock- blood was coming out from his head, thick and fast. Joke started to run toward Lorenz, and as soon as it reached him he bit his head. In fact, the dog thought that Lorenz was in danger because of the babysitter holding that piece of wood and so, as any dog would do when their puppies are in danger, Jock tried to pull Lorenz from his hair to bring him to safety.

The babysitter run away, and after few interminable minutes, the gardener of the house, Cesare, managed to pull the dog away from Lorenz. The little boy was on the ground, a puddle of blood seeping across the marble patio underneath him. When he touched his head all he could feel was his bare, naked skull and the endless blood flowing. A friend of Lorenz’s mother arrived, a true Godsend on reflection. Before passing out in the ambulance, all he could ask to his mother’s friend was “ am I going to die?”.

“Lorenz now lives far away from his house, and he has only a big scar on his head to remind him of what happened that day and the following years spent either in the hospitals or going back and forward to surgery rooms.”

The following year Lorenz spent his time in different hospitals fighting for his life. The first few months he had 20% chances to survive the incident and, if he would have survived doctors were certain Lorenz would be bald for the rest of his life. Thankfully, they were wrong; after twelve operations and after seeing multiple doctors all over the world, Lorenz finally got his hair back into his head. However, the experience was extremely difficult, he had to go through surgeries so painful that most of the adults would simply refuse. Lorenz now lives far away from his house. He just has a large big scar on his head to remind him of what happened that day or in the following years spent in multiple hospitals.

If you’re asking yourself how I know of  all of this it is because I was there that day, I saw everything but I couldn’t do anything to save that child, as I couldn’t help the dog when it refused to eat after the incident. Sometimes, mostly before going to sleep, I wish I could have done something for Lorenz, maybe help him but I simply couldn’t. I stared aimlessly whilst the dog was biting him without being able to do anything. That is why now, maybe to redeem myself, I am trying to protect the little boy who saw his childhood end at just five years old. Lorenz has never been the same child again; yes he always looked happy and positive, but he had a black dragon who was eating him from the inside. I’m not writing his story to have your sympathy, but to correctly recount Lorenz’s journey. Too many journalists have mistakenly accused his parents or his dog for what happened that day. Not one of those journalists was there or has ever met Lorenz. Maybe the dog really wanted to attack Lorenz, and not protect him; but between believing in something good or something bad, what would you choose to believe in?

Another reason why I am telling Lorenz’s story is because I want his experience to help someone who is currently struggling with life. When I was little the help I needed came from my father who every time I was scared or worried would tell me the incredible adventures of a valorous knight. That knight’s name was Lorenz. Only now I realize that my father, Umberto, whenever he was telling me about that knight fighting against a black dragon, he was actually speaking about me and the surgeries I was about to endure. The real hero in this story is not me, I was only five years old, I couldn’t fully realize what was happening to me. The real heroes are my parents, my mother and father, who supported me with all their powers, resources, and time. I remember my father driving ten hours every five days to bring me to this hospital to check my head. I could see my mother’s face when I was laying in the hospital’s bed, I was smiling at her because I couldn’t understand that I was dying, and she would always smile back, even if in her heart she was dying with me. I remember my dad’s face when he saw me for the first time lying on the hospital bed, I remember seeing total anguish in his eyes, in those two fiery blue eyes that represented the world to me. I made it through those years spent at hospitals and traveling, searching for the best doctors around the world thanks to my parents, who never gave up on me. I can’t recall a single night when they weren’t next to my bed holding my hand.

My father always say that life is like a clepsydra that you cannot turn, once all your sand reaches the bottom it is over and you cannot go back. My advice to you is to not waste your grain of sands, do not arrive to the end wishing you could change it, but change it now while you can. 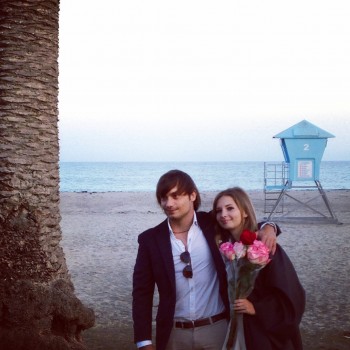 Gianlorenzo a year ago with his beautiful girlfriend Helena

Do not waste your time doing something you do not like, or with people that do not add anything to your life. You will encounter hardships, it is going to be difficult to become the person you aspire to be, but remember that all the people who have made it, went through difficulties without ever giving in. Steve Jobs was fired from Apple and Alexander the Great was considered just as the little child of Philip II of Macedon, when he became King at the age of twenty. Sixteen years ago, in this exact month, my family and I discovered that I had a 20% chance of survival after my dog scalped me. One year ago, in this exact month, I met someone who has become very special to me and since then life has never been better. Don’t ever stop fighting, even when you are amongst a seemingly endless storm, because one day you will wake up and the sun will be shining once more to remind you that after the storm it always has its way of returning.