Trending Now
You are at:Home»Lifestyle»Health»Living Skin-Deep

Summers in Santa Barbara are the most beautiful of all. There are many things to do in the natural environment here, making it almost impossible to stay out of the sun.  The amazing beaches, hiking trails, and bike paths give us the perfect backdrop for enjoying outdoor activities.  But did you know they are setting us up to be more vulnerable to the sun’s damaging rays? Skin Cancer Awareness Month is most often acknowledged during the month of May, but the Antioch Odyssey Staff felt it important to start talking about it now!

I NEVER thought I would experience skin cancer, but this past year I did. I had basal cell carcinoma.  This is the most common form of skin cancer. The difficult experience made me passionate about helping people understand the sun’s effects on the skin, biopsies, avoiding painful procedures, and ultimately a scary skin cancer diagnosis.

It was a normal day.  I went in for a routine skin exam, at which time my dermatologist said I had a red flaky patch on the side of my front hairline that he was concerned about. He said, “I want to take a small biopsy, (a piece of it), and send it to the lab to see what is going on”. I went home, unworried; it was so small, and while it had been there for quite some time, it really hadn’t gotten bigger or changed color, which I thought were the only real signs of trouble. But I was wrong! 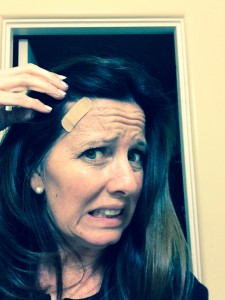 Within a few days I got the call from the lab saying I needed to come in as soon as possible for a “scraping” and “cauterizing”. Yikes! What the heck was THAT?  Ed, the man at the lab, proceeded to tell me that they would remove a margin of my skin.  I would then sit in the waiting room while they tested it in the lab immediately to see if they got all of it. If not, they would take me back in the surgical room to do more cutting, until they came away with “clean cells”. He explained they don’t stop at scraping cancerous basal cells, but that they take a margin of the healthy cells, just to make sure it is completely clean- which often makes the incision deeper and wider than the actual cancer site. 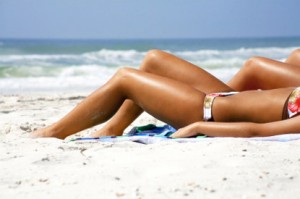 As I sat in the waiting room anticipating my biopsy results, I thought about my teenage years and how just to look tan, one summer at a time, I would lay out at the beach all day covered in dangerous tanning oil.  I was also a bike-rider, a volleyball player, and a swimmer, so as tan as I already was from the sun, I never felt tan “enough”. When my tan would fade after summer, I would get to a tanning salon to help ward off the return of my irritatingly lily-white skin. ( I have my Irish ancestors to thank for that.) 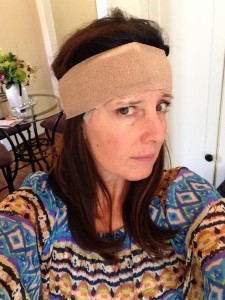 “Jennifer, thank you for waiting. The doctor wants to remove more.” I came and went from the waiting room to the procedure room 4 times, before they got it all! I was so scared and shaken up each time they called me back in! The literal hole  in my head was getting wider and deeper, cutting into my hairline several inches; I couldn’t imagine how they were going to sew it up without making me look like a stitched up rag doll or Frankenstein’s creature. But they did.

It’s been over a year now and the scar has lightened up quite a bit and it’s not unsightly, but I definitely notice it when I look in the mirror. I do consider myself very lucky so I watch out for sun exposure on my face, and rest of my skin too; applying daily sunscreen, wearing hats outdoors, and avoiding the sun’s rays in general. I also learn everything I can about skin cancer research so I stay informed.There were things I didn’t know before this experience.  Here are 4 small tips I’ll share with you so that you too can begin considering how you will protect yourself  from overexposure:

Skin cancer doesn’t only strike “sun-worshippers” or tanning bed users!  People with a family history of melanoma can be more prone to it than the rest of the population. Reports have shown that having a first-degree relative with melanoma—that is, a parent, brother, or sister—can increase your lifetime risk by 10-15 percent.

Contrary to popular belief, your moles might not become affected.  The idea that bad moles turn cancerous, some pathologists believe that and some don’t. There are some who believe that you can have a bunch of moles and those will be fine, but you can still get a melanoma in some other place.

It can appear in areas not exposed to the sun.  It can certainly appear between your fingers and toes, and on your underarms, butt, and genitals. 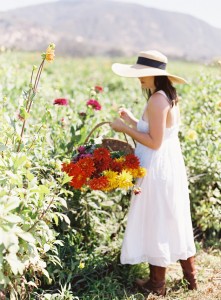 The beautiful Dahlia Farm in Carpinteria

With all this in mind, certainly go and enjoy the beautiful months ahead, but be sure to take precautions for yourself and, in this case