Since childhood, Day of the Dead has always been present in my life. Every family remembers their loved ones with parties because the families feel their deceased relatives are in a better place. Public and private schools in Mexico prepare offerings, and invite the students to bring something for the altar. Costume contests, parties, food, and music are all part of the celebration as the day is considered the most representative tradition of the Mexican culture. In Mexico, Dia de los Muertos is a happy celebration.

In 2008, United Nations Educational, Scientific and Cultural Organization (UNESCO) declared the festivity as Intangible Cultural Heritage of Humanity of Mexico. The origins of the celebration of the Day of the Dead in Mexico started with the arrival of the Spaniards. When the Spaniards conquered Mexican territory, natives were exposed to the new world, and therefore more culture. Native Mexican cultures such as: the Mexica, Mayan, Purépecha and Totonaca all celebrated this ritual. The rituals that celebrate the life of the ancestors are carried out in these civilizations since pre-Columbian times. Among pre-Hispanic peoples it is common practice to preserve the skulls as trophies and display them during the rituals that symbolize death and rebirth. Pre-hispanic is used in reference to what existed in America before the arrival of the Spaniards. According to tradition, the deceased children are celebrated on November 1st, and adults are celebrated on the 2nd. 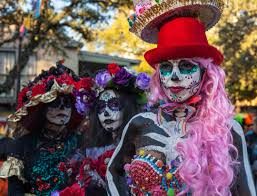 How is the Day of the Dead celebrated in Mexico?

The popular belief of Dia De Los Muertos is that the souls of the loved ones who left us return from beyond the grave during the Day of the Dead. For this reason, they are received with an offering of their favorite food, drink, fruit, sweet calaveritas and, if necessary, toys for the children. A very important part of this tradition involves visiting the cemeteries. Either during the day or night, families come and place candles on graves as a way to illuminate the path of souls on their return home.

The most common item and offering is the delicious Bread of the Dead. There are different styles and forms of bread. The most popular is round, covered in white or red sugar, with strips that simulate bones. The altar of the dead is the center of this celebration and its elements are a mixture of pre-Hispanic and Catholic traditions that merge to celebrate death. Generally the altars are of two, three or even seven levels. In all cases, the lower levels represent the earth and the underworld and the upper levels represent the heaven. Some of the most important elements that are present on the offering are: water, salt, flowers, bread, and incense.

Water is the source of life, and it is offered to souls to quench their thirst after their long journey and to strengthen their return. In some cultures symbolizes the purity of the soul. Another item used to decorate the altar is salt, which means purification. Candles are used in its different forms and the flame they produce means light, faith, hope. Candles are used  as a guide, so that the souls can reach their old places. In several indigenous communities each candle represents a deceased, that is, the number of candles that the altar will have will depend on the souls that the family wants to receive. Incense is used to cleanse the place of evil spirits and thus the soul can enter your house without any danger. Flowers adorn and aromatize the place during the stay of the soul, which when leaving will be happy, the color of the flowers, which is orange, means purity and tenderness, and accompany the souls of the children. And finally, the bread is elaborated in different ways, and it is one of the most precious elements on the altar. 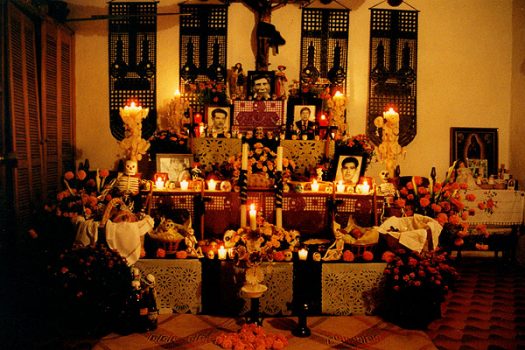 The offering, as we know it today, is a reflection of the old and the new world. The Day of the Dead is a rich Mexican tradition, and so whether you are local, or a visitor, be sure to visit visit the offerings in Santa Barbara at Casa de la Raza.