Trending Now
You are at:Home»Current News»Community»The Night of the Fire

December 4th seemed to be a typical day. I did what I had done so many times since I had moved home from Fresno after the drawn-out dissolution of a long-term relationship. I had woken up, gone in to work, come home, eaten dinner and was preparing for a final class presentation the next day. The local nightly news told of a fire —later named the Thomas Fire—in Santa Paula near St. Thomas Aquinas College. While it seemed unfortunate, a fire seemed no surprise as the Santa Ana winds were raging that night. The fire seemed like no threat to the family home, nestled in the Ondulando neighborhood in the east hills of Ventura. As the news story went in to more depth about the blaze, our power went out. Again, this was no surprise as the Santa Ana’s had a nasty habit of downing power lines. Our family’s flashlights were lacking in power, so I stepped outside to retrieve one from my car. The night was blustery and the sky was a deep blue. After a few minutes, the power came back on, and my family continued on with our lives.

Maybe fifteen minutes passed before the power was once again knocked out. I stepped outside again—to check exactly how windy it was—and noticed the sky was now black. A thick layer of smoke was blotting out the sky. By nature, I am an anxious person. My sleep has often by marred by nightmares of natural disasters unfolding. The possibility of some unthinkable tragedy hitting our home always loomed in the back of my mind. The sudden presence of smoke caused my anxieties to flare, and I did the only thing I could do, and took proactive measures. Only two months before I had ordered emergency folding carriers for our family’s four cats, just in case we needed to evacuate and couldn’t get to our regular carriers in the garage. It made me feel better—made me feel like I was doing something—to set up these carriers and corral our indoor cats in places where they couldn’t run and hide from my reach.

Our house was not usually a silent place. My dad likes to have the television on, and as the lack of power in the house meant a lack of the usual background television patter, the house seemed particularly quiet that night. The silence was interrupted by a loud knock on our front door. In my anxious state, I immediately decided that it was the police, telling us to evacuate. Instead, it was our elderly neighbor from across the street. Standing in a white nightgown silhouetted by the blackened sky, she cut a ghostly figure. She told us that her niece had called, the fire had reached Aliso Canyon—halfway between our neighborhood and Santa Paula. She thought maybe we should evacuate. No, my dad told her, surely, we would hear something from an official source if we needed to get out. That’s when the first text from my brother came in.

My brother, Mark—who also lives in Ventura, but in a neighborhood in the flats, close to the ocean and roughly a mile away from the hillside—was checking if we were okay. Looking at his text alerted me to the fact that my phone had no signal. I tried to check online to see what was happening, only to realize that the entire network—save texting—seemed to be down. Would officials even have a way to alert us? I texted Mark back, asking if he knew if we should evacuate. What felt like forever passed before he answered. In reality, it was two minutes.

While I would love to say that I calmly informed my parents and neighbor of this troubling news, the reality is that I yelled. “We have to get out. Mark says we have to evacuate. We have to go now.” My mom went to change out of pajamas as I zipped the indoor cats in to their carriers. My dad helped our neighbor to the door so she could go grab her insulin. I was almost ready to go, I just had to go out back and hope that our outdoor cat was around and would let me grab him. The second I stepped outside I noticed the sky was no longer dark. It was a sick gray-orange. I didn’t have time to contemplate this troubling change as our outdoor cat was in fact in reach. Once he was in his carrier, I brought all four cats out to my car and was ready to go. Now I just had to get my parents out the door.

I ran back in to see my dad grabbing cash he had hidden in his house. I asked where my mom was. He thought she was putting on her shoes in their bedroom. In reality, she was standing in the middle of the bedroom, unmoving. It seemed that she was in shock. I told her again that we had to go, now. She quietly followed me, we grabbed our purses, and our family left the house.

As my parents waited in their car for our neighbor to find her medication, I drove off towards my brother’s house. The street was busy for that time of night, but there was a noticeable lack of emergency vehicles. Not a single fire truck or police car was anywhere to be seen. This was particularly disturbing as the gray-orange sky was now rimmed with red. It was obvious the fire was close. Very close. 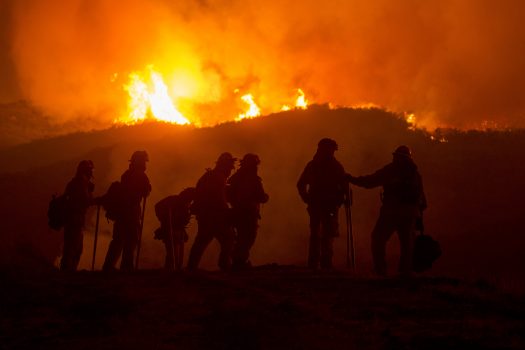 Unfortunately, the Ondulando neighborhood—which has more than 1,000 houses—only has two exits. Even worse, all the hillside neighborhoods in Ventura filter out on to the same place, Foothill Road. I was lucky to be able to exit the neighborhood quickly, and drive all the way down Foothill to reach my brother’s home. This trip took me about 12 minutes. It didn’t even occur to me that Foothill–which, as its name implies borders the hills of Ventura—could be in danger. It was. Several minutes after I drove through, Foothill was closed down.

My parents weren’t as lucky as me when it came to timing. They left the driveway roughly ten minutes after I did, and immediately entered a line of cars that was backed up to a few houses down from us—half a mile away from Foothill. It took them 20 minutes to exit the neighborhood, and then another 30 to get to Mark’s place. Phone systems were still down in Ondulando, so while they waited patiently in line to exit the neighborhood, the calls Mark and I made to them went unanswered. Needless to say, we were panicked. Eventually, they were able to get through to us and let us know they were safe and headed our way.

While we waited for my parents’ arrival, Mark and I stood outside in 20 to 60 mile-per-hour winds watching the hillsides burn. The sky had turned from gray-orange to the bright orange of active flames. Aside from the howling of the wind, there was no noise. No sirens. Certainly no helicopters dropping water or flame retardant on the hills. The fire was too big. The winds were too strong. There just weren’t enough resources, not enough personnel to do much against a fire like this. As the minutes passed, we watched as people in the neighborhood packed their cars full and drove off. It seemed that nowhere in Ventura was really safe. Eventually, my parent’s car turned down his street and parked in front of Mark’s house. They both exited slowly, seeming unsure of this new world around us. I ran forward, eager to have visual proof that they were both safe. The night air was incredibly cold, but my parents radiated warmth. I was so happy to have them safe and sound. I have never hugged them harder than I did that night.

My memories of the rest of that sleepless night, and the next few sleepless days are a blur. I was certain that our house was gone. My parents held out hope. Eventually, a friend of Mark’s was able to get in to our neighborhood. She asked him if we wanted to know the fate of our home. She asked Mark for our address. Then asked if he was sure he gave the right address. It was gone. Our house—our home—had burned to the ground. There was nothing left. My family, like more than 700 others in Ventura and Santa Barbara counties, lost everything they had. Over the course of slightly more than a month the Thomas Fire burned 281,893 acres. 1,063 structures were destroyed. Two lives were lost. The Thomas Fire caused immeasurable damage in our communities.

Weeks passed before we were even allowed back in our neighborhood. National Guard trucks blocked the entrances, allowing in only people who lived in the neighborhood whose house was still standing for 15 minutes stretches. Finally, we were allowed in to the neighborhood to sift through the ashes of our home. The first drive through our neighborhood was surreal. The roads I had driven so countless many times before now looked like an alien landscape. 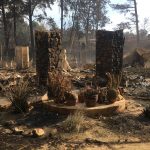 Home after home was gone. Fire retardant covered everything. It was actually difficult to decipher where we were—I was so accustomed to using familiar houses as reference. I wasn’t as emotional as I expected when we pulled into our driveway. What stood on our property was no longer recognizable as our home. All that remained were the front porch, the chimney, and the bathtub and showers. Everything else, every item I had taken for granted, every item I passed by a thousand times, everything my family had worked so hard for, was gone.

Since that awful night in December, my family and I have done the only thing we can—we keep going. We found a place to rent. We dressed in Hazmat suits and made Breaking Bad jokes as we sifted through the ashes for anything salvageable. We stood in awe of the few items that did survive—an antique china set! We talked with our Insurance company. We found a contractor to help us rebuild. We, like so many families will rebuild. We will make changes of course. Make sure our property, and our new house, is as fire-proof as possible. And I—I will keep going too. I will go to classes, and I will graduate, and eventually I will find a place of my own.

But I will never forget the sky that night. First it was the deep blue of a clear December night. Then it was an ominous black. And finally, a sick gray-orange hemmed with red. The gray-orange color would haunt me. Streetlights in fog bring forth a strange primal fear in me. Is the world burning again?