Friends, family, and allies of the LGBTQ+ Community came together at Chase Palm Park on August 28 to celebrate strength and diversity. The event was hosted by the Pacific Pride Foundation, and thousands came from near and far to celebrate, get inspired, and be entertained by the many musical performances throughout the day. The free festival also featured local non-profits, food trucks, local vendors, and a variety of welcoming faith organizations from the Santa Barbara area.

In addition to the live bands and dance performances, the Santa Barbara Chapter of PFLAG (Parents, Families and Friends of Lesbians and Gays) held its fourth annual Love. Period ceremony as the opening event of the Pacific Pride Festival this year. Love. Period is an Interfaith Pride Celebration where open and welcoming faith groups come together to stand up for the dignity of the Community. The celebration featured an Interfaith Choir that delivered on its promises to be healing, motivating, and uplifting. They kept the crowds clapping and swaying along to their inspirational music. 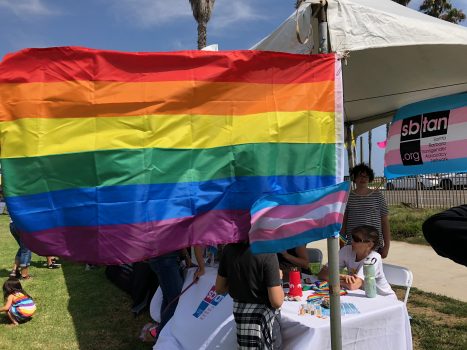 A gentle ocean breeze keeps the flags flowing at the SBTAN booth during the 2018 Pacific Pride Festival.

While walking around the festival, the atmosphere was friendly, vibrant, and full of joy. Supporters of all ages were dancing and celebrating wearing rainbows and flags of support for a multitude of sexualities and gender expressions. One local Antioch University student, known only as “G.” felt the love that day as well. “It’s great to see so many young kids just being themselves. At Pride, everyone gets to be who they really are, no matter their sexuality or gender.” Indeed there was a younger feel to this year’s Pride Festival. Groups of adolescents adorned in colorful celebration were enjoying the sunshine and love at the day-long festival. “In today’s political climate, where else can you see that? Kids just want to know they are loved for who they are.” But in the back of their mind, the Antioch student was aware of the harsh reality of discrimination and hate crimes in the greater world around us. They asked that we not reveal their real name. “You never know what crazy person with an agenda reads this, says ‘oh, you must be gay’… and the next thing you know I start getting hate mail, or worse.” 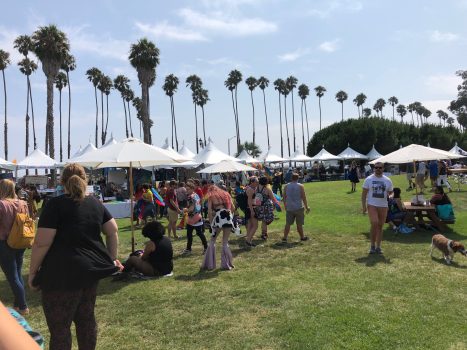 Many local elected officials showed their commitment to LGBTQ+ rights and equality and promised to fight the very hate that G worries about. Among those in attendance were State Senator Hannah-Beth Jackson, Assemblymember Monique Limon, and Congressman Salud Carbajal. Each of them had a moment to speak to the crowds, and their messages were full of love and support for the LGBTQ+. They spoke of the struggles that this community has faced in the past, and offered strength and perseverance for those struggles that we still face. 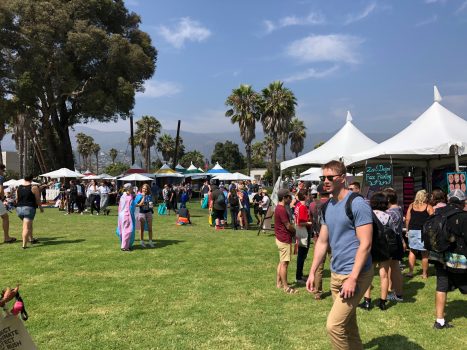 All ages enjoy the booths in Pride Village.

This year’s theme “With Pride, We Rise” celebrates a community that was hit with loss and hardships through the Thomas Fires and Montecito Mudslides but still prevails. Abe Powell, the founder of the Santa Barbara Bucket Brigade, spoke of the importance of coming together as a whole community in times of need, no matter what language you speak, where you come from, who you love, or what gender you are. Powell told the crowd that the true nature of a loving community is evident by who shows up when they are needed. “That’s what makes us strong.” It seems that G shared the same sentiment when they said: “If more people would just come see the love at Pride, the world would be so better off.”