Trending Now
You are at:Home»Current News»Microsoft Buying LinkedIn for 26.2 Billion

Why is Microsoft’s CEO interested in acquiring LinkedIn for $26.2 Billion?

On Monday June 13, Satya Nadella, at the head of Microsoft since 2014, revealed his intention to negotiate the acquisition of the professional social network LinkedIn, for $26.2 Billion! The company will maintain its identity, but its name and management will be Microsoft’s propriety by the end of the year.

“Today is a new start for LinkedIn. I see opportunities for our members, and clients. I can’t wait to contribute to this new project!” Jeff Weiner, LinkedIn’s CEO. 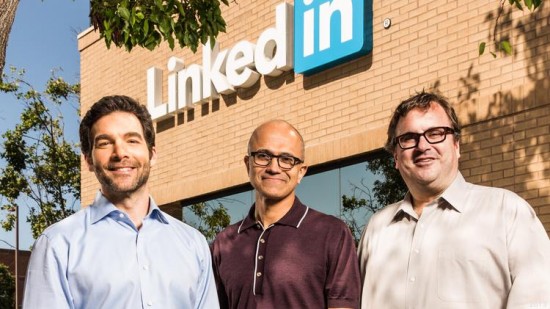 The company founded by Bill Gates already spent $8.5 Billion for Skype in 2011, and $9.4 Billion for Nokia in 2013. Facebook bought WhatsApp for $19 Billion and now Microsoft is ready to spend over $26 Billion for LinkedIn. It would be the biggest acquisition since the company’s creation in 1975, and the third biggest in history, in the new technologies industry. If the price feels astronomical here, it is in fact not as high as it could be, since Satya Nadella considered in his offer the LinkedIn shares decreasing from the beginning of the year, by 40% already.  The company has grown very fast over the years, but its results are in the “red zone”. In 2015 the revenues went up by 34%, getting close to $3 Billion, but losses were multiplied by more than 10, bringing it back to $164 Million. 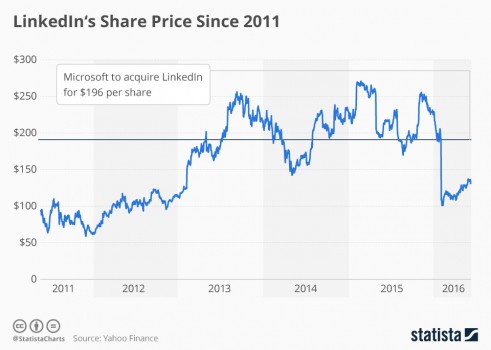 Microsoft will pay $196 per share, but still negotiated a good deal, considering the pick value of these same shares.

So what is Satya Nadella trying to accomplish by bringing the professional social network to his company? It is his first big acquisition as Microsoft’s CEO, and when he communicated with his teams about the negotiation, here is what he declared :

“We have the same mission: empower people and corporations. With our growth around Office 365, this deal is fundamental if we have the ambition to re-invent productivity and work!” Satya Nadella.

He also suggested an integration of LinkedIn directly to the Office suite : “This would make possible new experiences, like a LinkedIn news feed which will send you articles related to what you are working on. Office will suggest and connect you to an expert who will analyze and help accomplish your task“. According to Mr Nadella, LinkedIn will be the heart of the new productivity experience offered by Microsoft. The coming together of the professional cloud, and the professional network! LinkedIn’s past acquisition Linda.com ($1.5 Billion), will also be accessible inside Microsoft’s products.

The company’s success came from dominating the PC software market, then Microsoft struggled to copy and apply the same business model over the mobile world. It is now shifting, to become a company that primarily sells online services to business customers. Acquiring LinkedIn means embracing this new model, and will help broaden the set of business customers it can serve, and deepen the relationship with those it already serves!

LinkedIn is often underestimated but this network is in a quasi-monopolistic position, and has an incredible capacity to collect pertinent and profitable information. 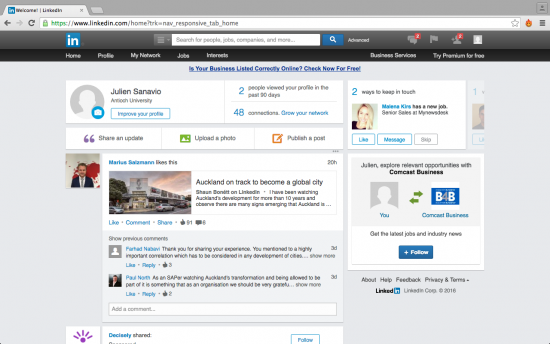 History has shown that “synergies” are very difficult to realize when two big companies combine, especially when LinkedIn is supposed to remain independent within the Microsoft empire!

Will this deal be profitable to both companies? The negotiations should be over by the end of the year.

Mr Nadella assured strong results within a little over two years, let’s see if he was right to focus Microsoft on that “working productivity” strategy, selling online services to business customers.