Trending Now
You are at:Home»Docs»Zidane, A 21st Century Portrait

“He is from an other planet. When Zidane stepped onto the pitch, the ten other guys suddenly got better. It is that simple.”   Zlatan Ibrahimovic (Sweden)

Soccer player,  genius, artist, gentleman, many words that were used to describe Zinedine Zidane, French athlete born on June 1972 in Marseille. His elegance made everything look easy. When he played, he looked like a guy in suit and tie, with classical music in the  background. He didn’t like to make waves or to be in the spot light, but this shy gentleman deserved it all. 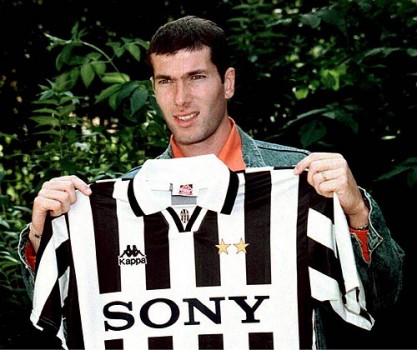 1992, Zidane is recruited by “La Juventus di Torino”. It is the starting point of his international renown.

Son of Algerian immigrants, Zidane learned to play soccer in the streets of  “La Castellane”, a rough neighborhood of Marseille. Discovered at 14 years old, at a French Football Federation camp by the AS Cannes recruiter; Zidane played three years in Cannes’ youth division, before integrating in 1989, the professional A team at the age of 17. He then transferred in 1992 to Bordeaux, where he shined and earned renown for his technical exploits. In 1996 he reaches the prestigious Italian Series A league, and not only match the expectations, but lead his club to an Italian Super Cup, a UEFA Super Cup, an Intercontinental Cup, and a pair of Series A title in only two seasons!

In two years with the Juventus, Zidane is at his peak, ready to host the 1998 World Cup with the national French team! A tournament that gave him the international status he deserved. Carrying the team to the Final against Brazil, he also scored 2 goals that are now legendary, in the 3-0 victory. He gave France its first and only World Cup. In a country where soccer is the most popular sport by far, he earned the National Hero status. Repeating the exploit during the 2000 European Cup, Zidane was once again the linchpin of the French team’s run to International glory; winning consecutively the World cup 3-0 against Brazil, and the European Cup 2-1 against Italy. 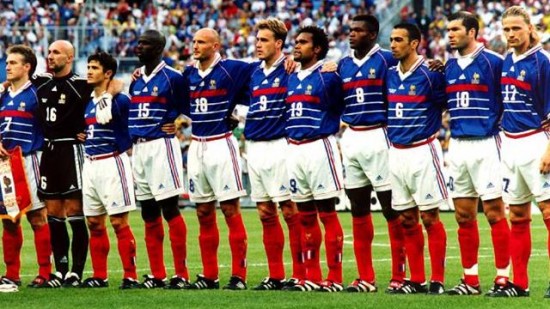 When France won the World Cup, the team was hailed for its multiculturalism, and how it represented a new France. There was a significant focus on the ethnic makeup of the national team, due to several members who were not ethnically French. Even Zidane, who was French native, was considered as a foreigner due to his Algerian descent. However after his performance during the tournament, people began to view the football team as a sign of a cultural revolution about foreigners and immigrants in France!

Footage of him kissing the World Cup trophy and crying while singing the French national hymn, replayed for days on end afterward by the state media, sealed him permanently as a French national hero. These images served as the postcolonial equivalent of the black soldier saluting the French flag…a potent post imperial myth of France’s multiracial unity, glory and destiny. Carrard Philippe “L’Equipe de France du monde” 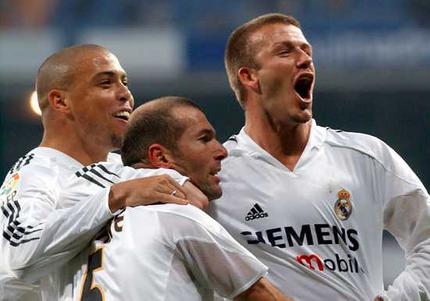 Zidane’s career is at its apotheosis! Winning everything that matters with his National team, he decides to leave the Italian Series A, to join The Real Madrid “Galacticos” in 2001. A team made out of the best players of his generation, Ronaldo, Beckham, Figo, Roberto Carlos. Names which might not ring any bells, so lets compare this to having Brad Pitt, Julia Roberts, Clooney and Damon, in the same movie (and lets call it Ocean’s Eleven)! A bankable project right! It was Zidane’s dream becoming true, a legendary Club for a player who wanted to leave a legacy behind. Never drawn among all this stars, his “halo” grew again and his role was predominant in the team’s dynamic. Most of them confessed in interviews they had to give their best to play at his rhythm, and even then, still be amazed by his doing! Here is how David Beckham talks about Zidane.

“He is exigent with himself, and expect you to follow…he brings the best out of his teammates.” Ronaldo.

Zidane’s transfer still cost the club more than 66 Millions euros, which was a world record at the time. An investment that paid dividends right away! During his first season, the frenchy helped Real Madrid to win the  Championship, and mostly the prestigious Champions League, most coveted Cup of all! Once again omnipresent during important games, he delivered during the final with a million dollar shot, one of the most beautiful goal of his career, and of soccer history!

Zidane is injured for the first two games of the 2002 World Cup, and the French National team didn’t even make it past the first round. Not that it was the only reason, the team did have at the time the worst cohesion in history, our players were too young with too big egos! But it still shows how precious this player was. In 2004, he is named best European soccer player of the past 50 years by the UEFA Golden Jubilee Poll, and was included in the FIFA 100 best players.

He then let the media understand he would retire after the 2006 World Cup, taking place in Germany. But first, on May 2006, he had to play his last game with the Real Madrid, in an emotionally heavy night. The retired “French Maestro” declared after the game :

When I looked at the stands, I saw my friends and family there. They were there to support me and that made the match even more special for me. I remember that I battled to hold back tears. Zinedine Zidane 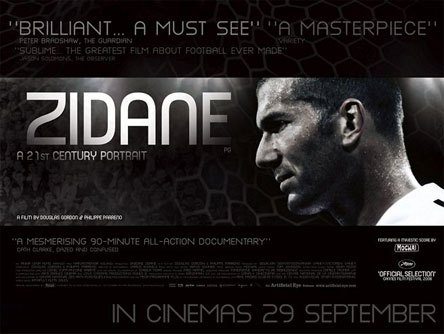 A family that he brought together for the first time at one of his game that night. His parents, his sister and three brothers, kids, wife and step family. He was never good at fancy quotes, or showing emotions, but that night was special, for him and the Soccer planet.  A movie was even released in 2006, Zidane, A 21st Century Portrait (link to the movie) purely focused on one of his game with the Real Madrid, during the championship. An homage to his career and his connection with the Spanish Club.

In people’s mind at the time, the upcoming 2006 World Cup was the promise of a second trophy, brought home by a Zidane eager to end his career the best way he could. One game at a time the whole Nation believed. After beating some of the best teams of the tournament, Spain, Brazil, then Portugal in semi-final. With a Zidane on fire, technically impeccable and real team metronome; the whole country was on hold during the Final! 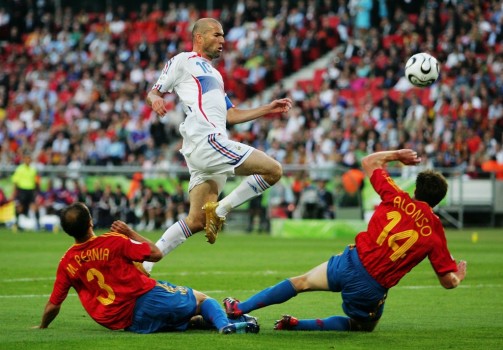 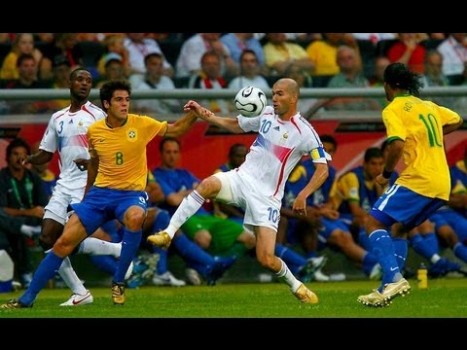 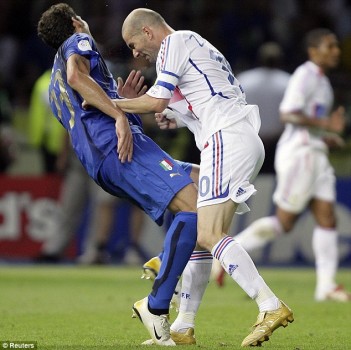 A Final opposing France to Italy. Not a lot of space, a locked game in which Zidane for France, and Materazzi for Italy, scored the only two goals. Two players who will be the main attraction of this Final, since the usually “cool” and “zen” frenchy ended up slamming his head onto the other one’s chest, after the Italian player insulted his family. Zidane is thrown out of the game, and France ends up loosing on the penalty kicks.  Some will say they understand, others can’t believe he didn’t have the lucidity to ignore the teasing. With the kind of adrenaline this kind of match can procure, who knows how one would have reacted. What we know is that his reaction cost him and the country, not to hold once again the World Cup, but would the French team have arrived this far without him? 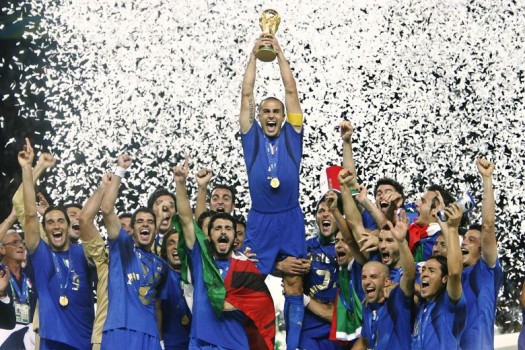 Italy, 2006 World Champion. I dedicate that one to Gianlorenzo!

The media tried to frame the event as a tragic end to a brilliant career, but when the president himself Jacques Chirac received the team after the tournament,  he mostly had eye for Zidane. Here is what he told him :

“Dear Zinedine, in such a hard and intense moment for you, I would like to express the whole nation’s affection and admiration for you. You are a virtuoso, a genius of football and an exceptional human being. That is why France admires you”. French President, Jacques Chirac 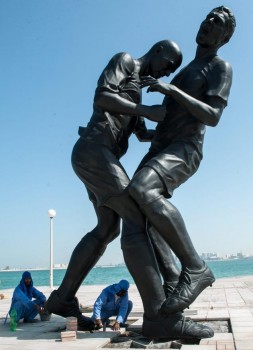 Made in Paris for the Centre Georges Pompidou Modern Art Museum, now exposed in Quatar.

Zidane’s family is the most precious thing he has. The money and fame never turned him into an eccentric character in love with himself. He always projected calm and self-control, but on that last game, the last one of his career in the additional time of a World Cup Final…he couldn’t take the teasing about his sister anymore, and snapped on his opponent! Leaving the arena without a look at the trophy. This sad event made him famous even outside the soccer world, giving him an undeserved reputation, but Zidane stayed in his retirement as elegant as he was as a player. Appointed a United Nation Goodwill Ambassador. He annually captains a team of soccer stars, performing  in matches for charity, with his U.N Ambassador friend Ronaldo. Now when people talk about his famous head kick, it is almost out of pride. A symbol of France’s strong personality.

When the media started to create the buzz around Zidane’s new career in coaching, some people said he wanted to rewrite the last ugly page of his soccer life. Others, who understand how much of a competitor he is, knew he needed a new challenge in his life. Not to be bored, and because soccer is his passion. He isn’t just using his name to push everybody around and coach any team, he went to get his license, and followed sports team management formations. When he felt ready in 2011, he joined Real Madrid’s front office as an adviser, and was named the club’s sporting director. In 2012, still humble, he starts coaching at the club’s youth academy; first step in a new career of calling the shots from the sidelines of his beloved game. 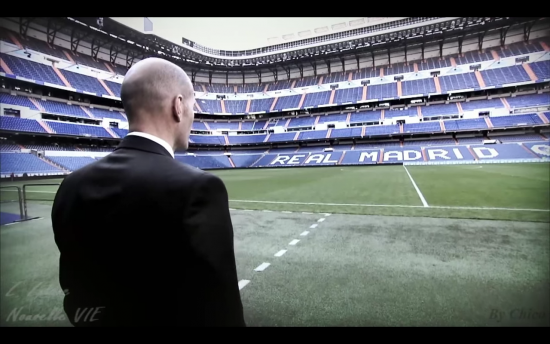 He becomes assistant manager for Carlo Ancelotti,  main coach of Real Madrid’s professional team, from 2013 to 2015. When this one is replaced by Rafael Benitez for the season 2015-2016, Zidane patiently stays on the bench, watching and learning.  In an era where the players are basically corporate entities with out-sized egos, mostly in a team like the Real, concentrating so many of them; you need above all man-management and diplomacy. A role Zidane always knew how to fulfill, as a player, but also as a man. Always humble, simple and far from any drama (until Materazzi); an aura such as his doesn’t allow any over-sized ego to look down on him. Ignoring his advises or game inputs would be madness, and all players know that. So for this 2016-2017 season, he was officially named Benitez’s successor by the Real Madrid’s president Florentino Pérez, who declared :

There can be no doubt Zidane is one of the game’s all-time great figures. He knows better than anyone just what it means to lead the Real. He’s fully aware of how tough and at the same time how exiting this demanding position is. Florentino Pérez

While some dreamed about him coaching in the French championship, you understand how important the Galacticos are for him when you take a look at the best years of his career. From player to management, Zidane and the Real Madrid are one of the best soccer combination, it is factual! And who knows maybe it will help him acquire the experience to lead the National French team. One can dream!

Here is the welcome video of his best moments with the club.