“On my ribs I have a peace sign, with a doe and the text “Be Free.” I have a story behind it, but I rather not share. But don´t we all want to be free? Not bothered about what others are thinking and expecting of you. I guess it is a symbol of how I want to live my life, free. ” X Anonymous AUSB Student 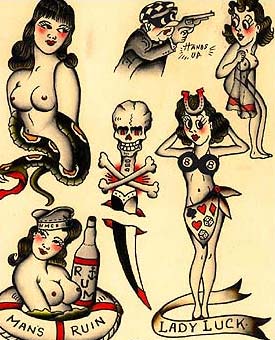 Tattoos are much more than just painful art. For some of us our tattoos help us to express ourselves or to memorialize a loved one. They allow us to remember a time and place in our lives that we chose to make stand still. All of my tattoos represent my life, they tell my story and I don’t care if anyone ever sees them.
At Antioch those of us tattooed seem to outnumber those who are not. An estimated 1 in 4 Americans have at least one tattoo. The ancient Polynesian practice of imbedding ink under the skin using a bamboo ‘needle” has become an American phenomenon. I spoke with several AUSB students about their body art and learned every story behind every tattoo was as unique as the person wearing it.

Cody’s Story:
I was in love with tattoos at first sight, even at age 5. My favorite tattoo was 3 days after my 18th birthday. I got a black and grey piece of Where the Wild Things Are on my shoulder. It was a vow to never grow up, and let adulthood destroy my imagination.
At age 16, I started going to Seattle for punk and metal shows. At the time, tattoos seemed like 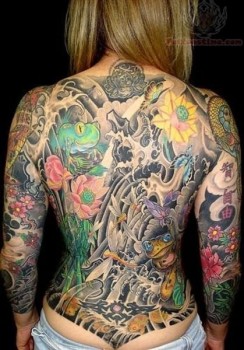 Full Back Tattoos are for many people an absolute must

the best way to reject mainstream culture. It’s great to see how widely accepted they are now.
Tattoos can be a conversation piece, which is helpful considering I’m so socially awkward.
They can be an easy target for ridicule. So when you consider getting a tattoo, my best advice would just be honest with yourself.

At age 18, all I cared about was girls, so that definitely had a lot to do with getting tattooed.
Tattoo culture is diverse group, and is growing fast. I think there is no longer a stigma outside the professional world.  Occasionally, I might scare an old lady at a Ralph’s supermarket reaching for the same ketchup bottle, but those kinds of moments are rare.

I went through phases where I hated some of my tattoos. One time I let a close friend tattoo me, who had no business doing so. It’s a Gemini symbol on my side, and it looks absolutely awful. I love how flawed it is. It’s sort of like how you would love a person unconditionally. Reminds me of people I don’t want to forget, and shows how far I’ve come. 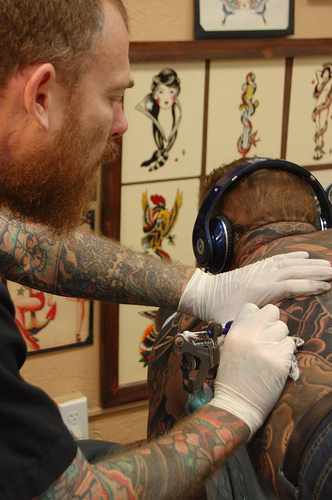 Local Tattoo artist doing his magic on a client

When I was growing up tattoos were for bikers, convicts and soldiers – I was destined to be one of them. During my first weekend pass from military training I had my first tattoo done in El Paso, Texas. It was 1993 and it was the best mistake that I ever made.

I asked Nick a few questions about his tattoos.

When did you get your first tattoo and why?
– I got my first tattoo in 2012. I’ve always thought tattoos were really cool seeing that some of my biggest role models such as David Beckham and Eminem had tattoos. 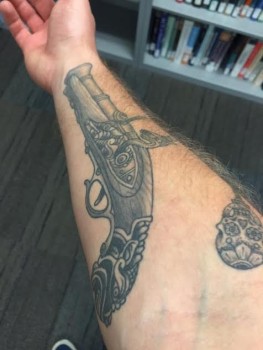 Do your tattoos have meaning?
– I have 7, and not all of them have specific meaning. Some of them don’t tell a story more than the idea of why I decided to get it.
How have your tattoos affected how others treat you?
– I have received nothing but compliments about my tattoos. I meet many other people through using tattoos as a conservation starter.
Do you regret any of your tattoos?
– Not one single bit. I can’t wait to get more.
How do your parents feel about your tattoos?
– They were against it at first, and then they got one as well, so now they think it’s kind of cool.
Do you think that your tattoos will affect employment options in the future?
– I wouldn’t want to work for anyone that judges me based on my tattoo, so no, I don’t think it’s going to have a negative effect on my career.
Orange County house wives have them, NBA stars flaunt them and everyday people like me love them. When I see someone tattooed, whether it is a small heart on their wrist or a full sleeve, I immediately know that I have something in common with them. A tattoo tells me that they have a taken at least one risk in their lifetime.

“I went through phases where I hated some of my tattoos. One time I let a close friend tattoo me, who had no business doing so. It’s a Gemini symbol on my side, and it looks absolutely awful. I love how flawed it is. It’s sort of like how you would love a person unconditionally. Reminds me of people I don’t want to forget, and shows how far I’ve come. “Cody S. AUSB Student

Tattooing is a growing trend that may or may not pass but, there will always be a core of people that remain true to the arts roots and continue to pass along this age old tradition. 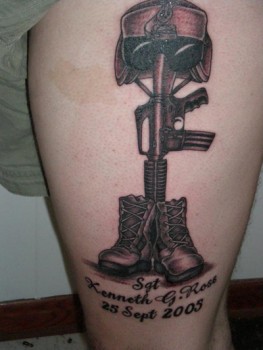 A tattoo to commemorate a fallen friend

I got my first tattoo the year I turned 19. Since I was 15 and became a Cristian I always wanted faith, hope and love ink on me. It´s from my favorite chapter in the bible and symbolizes three very essential feelings we humans needs to survive and to be happy. It is faith hope love on my leg and foot.

My other two tattoos have meaning as well. #Livet (under my lip) means #life in Norwegian. It is something my friends from Norway and I always say when something very good or something very bad happens. “Your phone got stolen?” “Oh, #life.” I got it mainly just for fun, but it reminds me of my best friends in Norway and all the good memories we have together I don’t regret any of my tattoos, I have thought about it, but there is no reason to regret it because they are there for life. I guess the scars, the money and the work behind getting it removed is not worth regretting it. But who knows? I am still very young. I may regret the one on my ribs the day I am pregnant and fat. Or when I am 60, fat AND wrinkled! 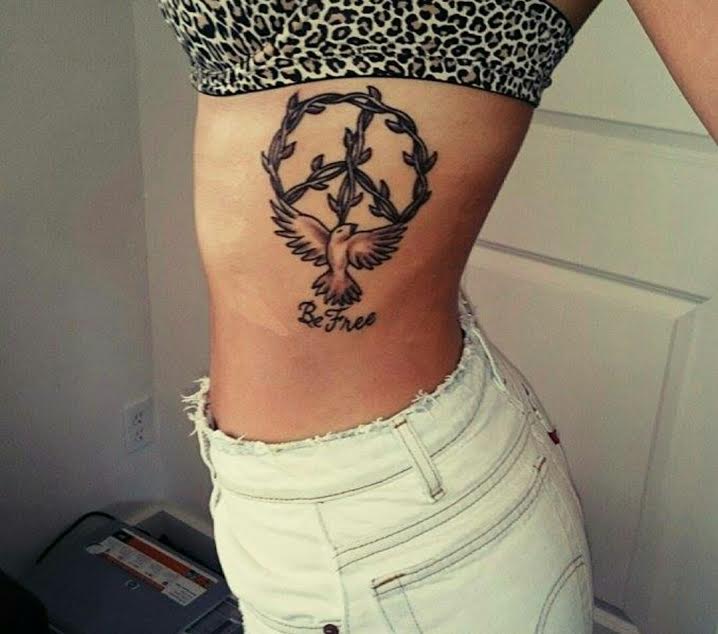 Antioch University Student displaying her tattoo on her side

Most people think my tattoos are cool. But on purpose I never have gotten any tattoos that are very visible. I always keep in mind that one day I want to get married without any inks showing, and I want to be a successful business woman and I think people take me less serious with visible tattoos. I always have the choice of not showing any tattoos and I like it that way. I never show my tattoos on job interviews for example.  – Anonymous AUSB Student

Tattoos are emotional and personal and as much as love them, I would encourage anyone that is considering getting tattooed to follow a few rational steps prior to getting their first tattoo.
Collaborate with your tattoo artist’s to get the design that you want and make sure they are capable of doing a tattoo that is satisfactory to you!
Get tattooed in a clean and licensed establishment.
Be sober!
Good tattoos aren’t cheap and cheap tattoos aren’t good.
Don’t be a punk, it is going to hurt. The pain is part of the journey.

I love my tattoos. They are freedom, they are……..just me. Sarah V. AUSB Student 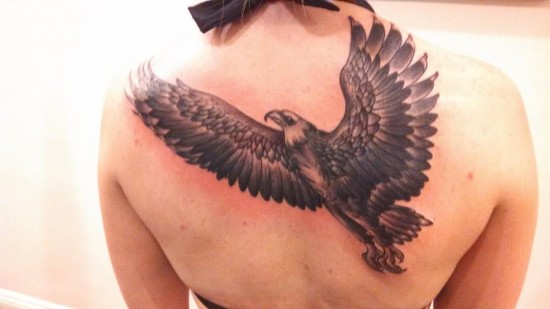 AUSB Student displaying her eagle tattoo on her back

Jon currently owns and operates SBTactical, a Santa Barbara based company dedicated to supporting law enforcement agencies with state of the art training equipment and training management techniques. During his twenty years in the U.S Army he served in several senior leadership positions in a multitude of locations around the world. Jon also works with local nonprofit organizations and community official’s on Veterans awareness issues. When not working, you will most likely find Jon paddling for a wave at his secret surf spot.