Trending Now
You are at:Home»Features»Meditating on Death to Commit to Living: Part 2

“As a Buddhist, I view death as a normal process, a reality that I accept will occur as long as I remain in this earthly existence. Knowing that I cannot escape it, I see no point in worrying about it. I tend to think of death as being like changing your clothes when they are old and worn out, rather than as some final end. Yet death is unpredictable: We do not know when or how it will take place. So it is only sensible to take certain precautions before it actually happens. Naturally, most of us would like to die a peaceful death, but it is also clear that we cannot hope to die peacefully if our lives have been full of violence, or if our minds have mostly been agitated by emotions like anger, attachment, or fear. So if we wish to die well, we must learn how to live well: Hoping for a peaceful death, we must cultivate peace in our mind, and in our way of life.” -Dalai Llama

Recently I found myself extremely curious as how to cultivate more happiness in my daily life and more appreciation for the present moment. Thinking about death was not the answer I was expecting, yet it proved to be exactly what I was looking for. After hearing about death meditations on Instagram, I began to reflect on death regularly in my daily meditation practice. The results of such a simple practice were astounding as I witnessed my life improve exponentially. All I knew about death meditations was that they are rooted in Buddhism and that the happiest countries in the world practice them, but I was determined to learn more. 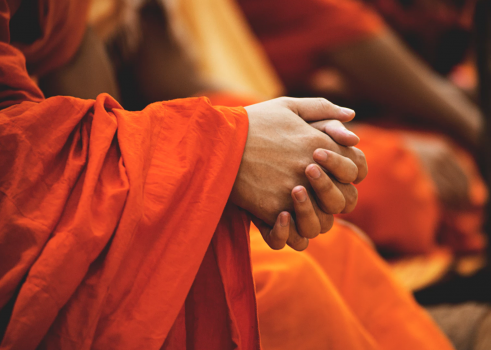 I took it into my own hands to do more research on death meditations. I assumed it was simply reflecting on how impermanent life is so that we completely appreciate the present moment. However, after speaking with Antioch Professor Ed Bastian, who has his PhD in Buddhist studies, I learned that traditional Tibetan Buddhist death meditations were not at all what I thought they were. “Within Buddhism,” Dr. Bastian explained, “there is the assumption that there is more than one life and the quality of future lives is dependent on the quality of our current life. The way in which we die is also important in terms of determining our future.” So the Tibetan Buddhist death meditation is when one meditates in such a way that he is going through the process of dying, so that at the time of his actual death he can be conscious throughout the entire process. People who do not prepare for their death in such a way do not remain aware of the dying process once their physical body stops breathing. However, one who has had a steady death meditation practice throughout their life will enter into this meditation once their actual dying process begins, and in doing so they will remain conscious even after their last breath has left their physical body. Dr. Bastian explained to me that in doing this the dying process is intentional, and it is believed in Buddhism that having an intentional death in addition to living a good life of compassion and service to others, will make your next life even better.

“From a Buddhist point of view,” the Dali Llama explains, “the actual experience of death is very important. Although how or where we will be reborn is generally dependent on karmic forces, our state of mind at the time of death can influence the quality of our next rebirth. So at the moment of death, in spite of the great variety of karmas we have accumulated, if we make a special effort to generate a virtuous state of mind, we may strengthen and activate a virtuous karma, and so bring about a happy rebirth.” 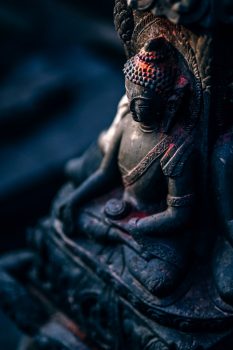 So how exactly does one do this? Dr. Bastian explained to me that there are eight stages in the dying process. The human body is made up of the four elements. The physical solids of our body, such as our bones, make up the earth element. The first stage of death is when the body begins to get weak and tired, representing the end of the earth element. The next stage is the dissolution of the water element, where the liquids in the body decrease such as the dryness in the mouth. During the next stage, represented by the element of fire, the body loses heat. This heat loss starts at the ends of the body, the fingers and toes, and works it’s way to the heart center. The smokey vision from the water phase begins to show sparks. Next the loss of the air element occurs as the body loses the ability to preform physical actions and has no awareness off the outside world, during this the internal vision of smoke and sparks begin to look like a flickering candle. This marks the first four stages of death. At this point, there is the bright white light that most people know as the end of one’s life. This is where people who have not prepared for death by practicing death meditations are no longer aware; however, those who entered into the meditative state as their dying process began will remain conscious through the phases after the white light. The white light then transitions into an orange light, then a black light, and lastly into a clear light. It is believed that since one is conscious during the clear light phase, the final phase, they will have control over the next life that they reincarnate into. When someone practices a death meditation regularly throughout their life, they are able to recognize the first phase of death approaching, go into their meditative state, and remain conscious throughout the entire process.

This traditional Tibetan Death Meditation requires a tremendous amount of practice, and is to be done under the guidance of a teacher. A teacher may deem that this is not appropriate for certain students, such as people who struggle with mental illness. And then, even those who are in good mental, physical, and emotional health and would be completely capable of starting a death meditation practice may not find doing so appealing at all. However, there is a way to incorporate the benefits of meditating on death into your life in other ways. I did so by finding time for quiet contemplation, and simply confronted myself with a few questions such as “what dreams and goals would I have lost if I died today?” and “what unfinished business have I left behind?” This created major positive change in my life by showing me what really matters to me and how I really want to be living, which in turn created significant improvements in my overall happiness and well-being.