Trending Now
You are at:Home»Features»5 Minute Showers? I don´t Think so!

Water, California in a Crisis?

Living as a student in Santa Barbara, California, I remember the first thing my landlord told me when I first moved here about 1 year ago, says Lars Gustavsen. “Shower´s, are to last no longer, than 5 minutes”.

The girls of the house started screaming, “washing my hair alone takes 20 minutes.”

Lars goes on to tell me about his first encounter with the drought. I remember thinking how serious this situation really must be, in order for our showers to be that limited. The first reaction provoked by that statement, was complete agreement and understanding. I had heard about the drought situation in California, but living in it would be completely different, or so I thought.

Coming from the Scandinavian country of Norway, I am used to a very free flowing consumption of water. Hearing of 5 minute showers, water consumption measurement and fines, I was naturally worried, Lars adds.

The girls of the house were especially worried; they were also Norwegian, and Swedish. Since I am a guy I don´t have to much of a problem with the shower rule since most of my showers normally last around 5 minutes, 10 at the most. 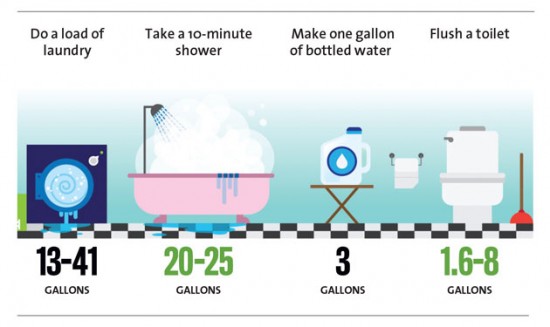 The average American household consumption of water on essentials.

At first everyone was timing their showers and trying their best not to take to long showers, being careful washing dishes and generally making sure not to waste precious water.

“At first everyone was timing their showers, however, this quickly changed.”

However, pretty soon it seemed like people had gone back to their usual routines. Showers were longer and sometimes you could even find the faucet running with now one around.

Lars has been living in Santa Barbara for about a year now, he goes on to tell me that, all over Santa Barbara you hear people say the same thing, the drought is so bad, take shorter showers, when doing the dishes, be considerate and don´t overdo your laundry,” what ever that means”.

It seems that the severity of the problem is not in the household it self, but in agriculture and environment. Household water consumption only stands for about 10% of California´s water consumption. This is why people aren´t really worried about their showers. A quick look at California´s drought page and you get a good overview of how water is used in California.

If household water consumption is so important, why is the drought getting worse?

“On average, the proportion of water used by each sector is 10 percent cities and communities, 40 percent agriculture, and 50 percent environment.” – California´s drought page 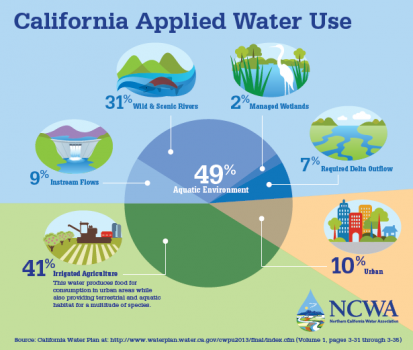 There are a lot of steps you can take in order to conserve water, and it seems like the focus is on the wrong places. Talking to your tenant in order to make sure he doesn’t over consume on water, seems rather pointless in comparison to the fact that cities and communities only stand for 10% total of California´s water consumption and that is included with all household water use, not just showers.

When it comes to the 5-minute shower phrase, it seems that it´s efficient in the same way scare tactics work. It makes you think and act, but slowly fades as people realize that it´s inefficient. Maybe it doesn’t matter, or you don´t hear about it for a while and figure that you´re in the clear.

In short, every little drop counts. If you choose to take a 1-minute shorter shower, don´t over water your lawn or garden, it all counts. It just seems that there is a lot more that could be done which would improve the situation a little more drastically.

For ways to improve your water conservation and learn more about the drought, take a look here: