Trending Now
You are at:Home»Features»Opinion»#lovetrumpshate

Wednesday morning the air stood still in Santa Barbara, walking down Cliff Drive even traffic felt quiet. It was not the lack of cars; it was just a feeling, like moving slower — quieter. There was sadness. There was crying. There was anger. Shock. And disbelief.

Regardless of political views, regardless of how you feel about Hillary, the outcome of this election has people feeling scared. Yes, scared. What does it mean to have our president-elect openly express racism, sexism, homophobia, xenophobia, mock a disabled reporter, threaten to deport millions of immigrants, brag about sexual assault, as well as a VP that advocates for conversion therapy? It’s a slap in the face. During election night, Van Jones(CNN) stated just this and put to words the fear and frustration a lot of people are feeling nationwide.

I am very aware that the color of my skin gives me privilege, but I feel the sadness; I feel the quiet; I feel the upset; and I feel the scared. I am sad because half of the votes went to a president accused of rape. Several rapes. Who degrades women. I am sad because I heard a Hispanic classmate say “I was born here”, like that even matters. Like one ethnicity is superior to another. My community is heartbroken.

Saturday 11/12 hundreds showed up to march in protest; the Anti-Trump march in Santa Barbara happened peacefully and joined in the line of nationwide protests against what they feel is an embodiment of hate and fear, a throwback to a time of bigotry and shaming. In a refusal to accept Donald Trump as the next president, people gathered in the De La Guerra Plaza and marched down State Street. 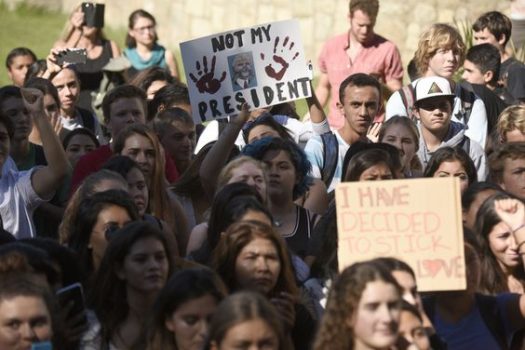 “I was inspired to protest because I wanted to let the government know where the people stand. I wanted the world to know that the majority of Americans do not believe in what Donald Trump has said and done during his campaign. I also wanted to stand in solidarity with the groups most at risk for being hurt with a Trump/Pence presidency. I also protested because Donald Trump did not win the popular vote. The American people wanted Hillary, but due to the Electoral College, we got Trump…” – Hannah Rae comment after the Santa Barbara protests. 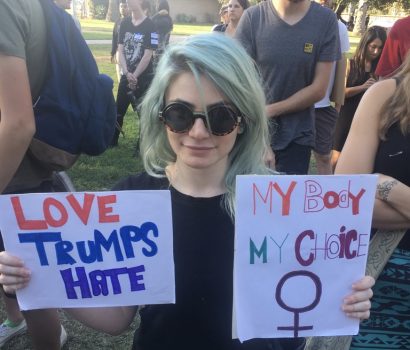 “...I went to two protests, one in LA, and the Santa Barbara protest, both very peaceful. No one was violent or did anything harmful during either of these protests. There seemed to be hundreds and hundreds of people at the Santa Barbara protest, and it was organized very well and I was extremely proud of the organizers. They did an amazing job! The atmosphere was great. There were so many kind and caring people, who all came together in the spirit of love, peace, empathy and hope. The protest helped people gather together to organize on a community level, to start to enact change and to protect people and their rights.” – Hanna Rae.

It is undeniable that there’s been a rise in discrimination and hate crime towards specific groups since the election night, “make america white again”, swastika drawings, as well as individuals hatefully targeting Muslims, Hispanics and Black people. It is truly saddening and it has never been more important to come together as a community to practise understanding, love, and compassion. Whatever political standpoint, hate-crime and discrimination belong in the past. People are taking to the street to protest, to have a voice; it is an example of a people in horror, in shock and distress. Scared their rights are in danger of being taken away from them, but it is also an example of people practising their First Amendment rights. Their right to speak up about injustice and a system they feel has failed them. An example of people coming together to make sure those most vulnerable feel heard, feel cared for, and respected in a time where uncertainty about what the future holds has become the reality.

Bernie Sanders expressed his support to the protesters in an interview with USA Today:  “In the days since the election people are angry. People are upset. And they want to express their point of view that they are very frightened, in very, very strong disagreement with Mr. Trump, who has made bigotry the cornerstone of his campaign. We have a First Amendment in this country, and I think that people all over are saying, “Mr. Trump, we have come too far in this country fighting discrimination and bigotry. We’re not going back. And if you’re going to continue that effort, you’re going to have to take us on.”

Camilla is in her last year at Antioch University Santa Barbara; she started out as a a psychology major who liked to mix it up with writing classes, but eventually ended up becoming a creative writing major as well. Writing has always been one of her passions besides music and yoga, as it has worked as a creative outlet and always had a place in her everyday life; “I live to be creative! Somehow, in a very organic way, I always seem to end up where I am suppose to be.” — She is originally from Norway, but grew up around different cultures and languages with her father being Moroccan, making advocating for diversity and social justice an important cause for her.