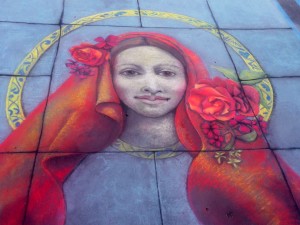 Painting of a Madonna Icon at the I Madonnari Festival 2014

Every year for Memorial Day weekend hundreds of beautiful colored drawings fill the plaza in front of the Old Mission. I have been going there to admire these paintings every year since I moved to Santa Barbara. Not much of an artistic person myself I admire the dedication, inspiration and craftship which goes into every single one of these paintings. The results are truly breathtaking; every year. I share my love for these street paintings with roughly 25,000 people, which is the amount of visitors the annual I Madonnari Festival attracts.

The I Madonnari Festival in Santa Barbara starts on Saturday morning and happens during the whole Memorial weekend. 200 large scale paintings are created in the plaza in front of the historic Old Mission by 400 artists and young people. Artists work on their paintings alone or in groups; many schools from the area create paintings as well. The beautiful results can be seen by visitors during the whole weekend and will last until the next rain. Besides the great pictures visitors can enjoy live music and free evening concerts in the Mission church. Authentic Italian foods is offered and all visitors can find their inner artist by drawing in the special street painting area, which is free for the public.

The I Madonnari Festival was started in 1987 and is the first street painting festival in North America. It was originally created to support the Children’ s Creative Project, a local arts education program. While the festival still benefits local charities it has since then become a Santa Barbara tradition and an important tourist attraction.

Although relatively new to North America street painting as a form of art has a long tradition in Western Europe. It originated in Italy in the 16th century. Artists would drawing chalk paintings on the streets, most often these paintings showed icons of the Madonna or other religious figures. This gave the artists their name: madonnari, or “ Madonna painters”. The madonnari traveled from town to town, drawing religious figures on the pavement. This historic tradition inspired the founders to create the I Madonnari Festival in Santa Barbara and it gave the artists their name “ Madonnari”.

More information on the festival, including opportunities to reserve a spot and to volunteer next year, can be found on the official website.

Esther was born and raised in Germany. Being interested in traveling and exploring other cultures made her decide to move to Santa Barbara. She studied marketing, economics and communication at Santa Barbara City College and is currently in her last quarter at Antioch, earning her B.A in the business management and communication concentration.