Trending Now
You are at:Home»Features»Arts & Entertainment»Michael Keaton- An Apple in a Basket of Oranges!

It is the season of “Oscar Buzz” and Michael Keaton is in the lime-light, many expecting him to win an Oscar for Best Actor in a Motion Picture, for Birdman. Recently Santa Barbara hosted him at The Santa Barbara Film Festival, where he received the festival’s most prestigious award, The Modern Master Award. 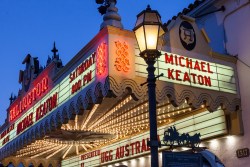 Last month Santa Barbara was graced with Michael Keaton’s participation at The Santa Barbara Film Festival. He was the recipient of The Modern Master Award, the highest honor presented by SBIFF. 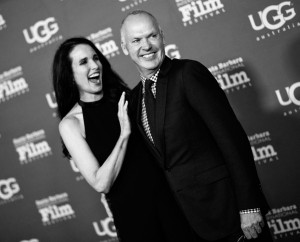 Keaton came into the room, after being introduced by well-known actress Andie MacDowell, then sat down for a warm and funny interview with Leonard Maltin, who kept the audience mesmerized with questions and film footage of Keaton’s body of work, which was presented in between Keaton sharing his professional experiences as an actor,  making movies like Mr. Mom, Clean and Sober, Night Shift, Tim Burton’s Batman, and the most recent award-winning movie Birdman.  His role in Birdman is setting him apart among his peers, audiences, and the Oscar Academy. Michael plays an iconic superhero who struggles to mount a play on Broadway, all the while battling his ego, his attempt to recover his family, his career, and himself.

When an actor transforms himself in a way that sets him apart from other actors, like an apple in a basket of oranges, it seems to be highly probable a “Best Actor” award will result in an Oscar. This year is no different.

The numerous scenes of intense and extended dialogue with virtually every cast member in the film shows the strength of the collective cast, but it is Michael Keaton’s stand-out-peformance, as an aging stage actor, that shines. Notably dramatic is the climactic and explosive scene on the opening night of the play.  Keaton takes great risks physically in the movie, running through Time Square in his underwear and later jumping off a building. 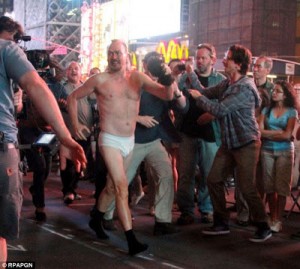 As was in several of his other movies, Keaton’s emotional range is expansive. There is a spectrum of fear, madness, regret, and joy. He plays each level with honesty and brilliant layering, enabling the viewer to join with him in his human journey through dreams made, dreams dashed, and the desire for future possibilities and the regret of unrealistic expectations.

For those that don’t know, Michael Keaton lives in Santa Barbara on occasion, so the festival provided him time in familiar surroundings. He spoke highly of Santa Barbara saying, “This is the place where I ride a lot, do the stand-up paddle board thing, run on the beach. The light here in the wintertime is as good as it gets.” 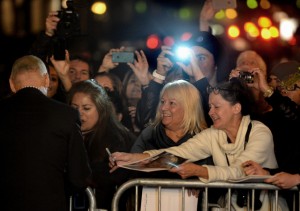 Fans receive autographs from Michael Keaton as he arrives.

There is a general prediction is that Sunday will be an evening to remember for Michael Keaton and his fans.  His hard work and rich contribution to the artistry of film helps fans feel that Sunday evening, most likely,  will be a very good night indeed!

The Academy Awards Ceremony is airing on ABC, Sunday, February 22, at 7pEST/4pPST.