Trending Now
You are at:Home»Features»Interviews»Part 1: Coming out

“My mom said she wishes I had never been born”. 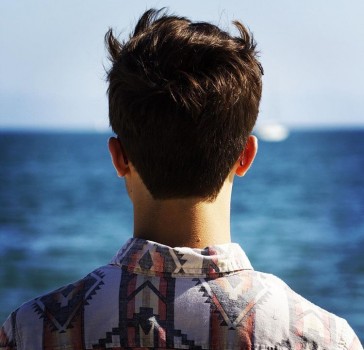 Editors Note: Human’s of Santa Barbara is our take on Humans of New York. Giving people on the streets of our community that we pass daily, a voice.

So I’m from Etna, which is a tiny little baby sized town in Northern California. It’s so tiny and it’s really conservative and very isolated from the rest of the modern world, especially in California. There’s no stop light in our town, there’s no fast food, there’s no anything. The nearest movie theater is like an hour and half away. The nearest Wal-Mart is an hour away. Everything is really far away. There’s nothing.

There are 700 people in the town that I grew up in, and a lot of the people are really good, but they also tend to be closed-minded or maybe or another good word would just be a little bit ignorant. They don’t realize that they’re ignorant and if I were to say to any of them like oh there’s a little bit of ignorance going on there, they would totally deny it. It’s ok I was ignorant when I was there too. It’s such a bubble. Santa Barbara is definitely a bubble too and there’s some ignorance here but it’s totally different there. It’s like a conservative ignorance. They don’t see the connection between people who live outside of where they live like they just think it’s bad basically.

I didn’t have a bad childhood at all or anything but I didn’t ever feel normal I don’t think, because I feel like I had these feelings naturally from an early age but I was constantly taught indirectly that what I was feeling was just not ok to do.

People are shaped by how they are raised. So before you hit puberty you’re not thinking about sex or anything like that, but you get these gender roles kind of placed on you. I wasn’t taught anything other than guys are with girls.

If there was ever any mention of gay people —which was very rare because no one ever talked about it— it was just like “oh faggots” or “that’s so gay”, it was such a negative taboo thing. It’s not like people put a lot of emphasis on going out of there way to talk bad about gay people but whenever it was mentioned it was a complete joke. It was like people were so rude about it; they didn’t even acknowledge it was a real thing that was totally normal. That’s how I was raised to think too, so you can imagine how it was very confusing when I started to realize that I liked guys. I was like no that can’t be true because if I did that then I was about to have to live my life an entire lie, which is basically what I had to do for like 3 years because I thought that was the better choice. I was kind of raised to think that it would be better to just not be who I was. I couldn’t see beyond where I was raised, I didn’t realize that there was like a whole other world out here, where people are accepting, not even accepting, I don’t even feel like it’s that, there’s nothing to accept, it’s just normal.

Pretty much everyone I told reacted pretty normally, in my friend group anyway. My really good friend asked me if I was HIV positive when I came out. I was ok with it because like I said ignorance is running rampant over there. I would’ve told my friends so much sooner if I wasn’t worried if I told them that my parents would find out. I told my guidance counselor at school. It’s a small town so she knows my parents and they all run in the same circle type of a thing. So this is like me telling my parent’s friends that I’m gay. She was fine it wasn’t a big deal I just needed to tell an adult. She told me that I just need to tell my parents when I’m comfortable but maybe I should wait until after graduation because they’re going to be helping me out a lot financially and everything and maybe I shouldn’t drop this on them right now for my own sake because I still need them for a lot of things. Kind of messed up advice from your guidance counselor. I kind of took that advice until I was like you know what, I couldn’t do it anymore.

When I told my parents, I was already high stressed because I wasn’t doing very well in school and I was really spreading my self thin between extra curricular actives, just a million things. My parents were really disappointed in me because I wasn’t playing sports like I had for the 3 years previously. Finally I just got to the point where there was never really going to be good time for me to tell them because we were already fighting all the time anyways.

One night I was going to bed and I remember I laid there for a long time that  just like freaking out, and then at 11 o clock I was like ok I’m going to do it. I got up I went into my parents room, I turned on the light and I was like I need to talk to you guys. I felt like I was going to throw up.

They were asleep and I had to wake up them up, they were like “Colton what are you doing”. I was just like I really need to talk to you guys, there’s been something I’ve been wanting to tell you, I don’t really remember what happened, I’ve tried to block it out. I finally ended up saying I’m gay. Essentially they reacted in the worst possible way, like how not to react to your kid telling you they’re gay was how they did it. It was awful. At first they were just like, “shut the f**k up go to sleep”, “that’s not true”, “you’re just trying to cause a fight”. I needed some emotional support at this moment, not the how dare you lecture, and so I was crying. It was just a mess. My mom said she wishes I had never been born, like I said, how not to react to your kid coming out. She was supposed to be there for me. She was like I can’t believe my son’s gay and I was like yeah imagine how I feel when

RUCO– “Inspires, supports and unites those who are living their lives either completely, or partially in the closet.”