Locally, there was an incident where a 19 year old UCSB student, Lucas McKaine Ransom, was attacked and killed by a shark at Surf Beach in 2010 when he was boogie boarding.

“There was no sign, there was nothing. It was all very fast, very stealth” (Garcia, friend of Ransom). 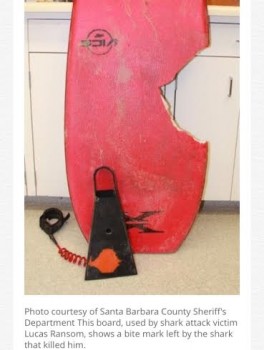 1. An ocean swimmer has a one in a 11.5 million chance of being bitten by a shark.

2. Some sharks can cycle up to 35,00 teeth throughout their lifetimes.

Tips if a shark attacks you:

-Hit the shark in the nose, which is often enough to end the attack. Next, try to claw at its eyes and     gills, which are areas with much sensitivity. 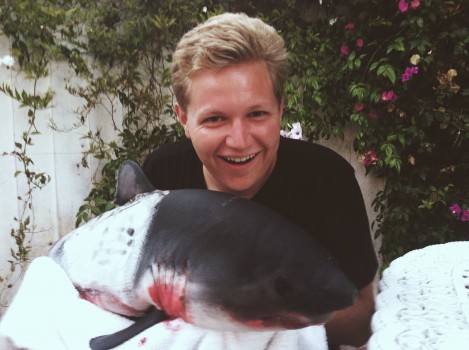 It was August 31, 2013. Local resident, Nick Kennedy, was with his friends from Westmont College during the bioluminescence at Butterfly Beach. As he swam out into the ocean, he felt something tug at his foot. He kicked at it, trying to detach whatever had latched onto him. His friends joked saying “I hope that wasn’t a shark!” They all stayed in the water a bit longer, until Kennedy decided he was in too much pain to stay in. When he came to shore, it was so dark that they could hardly see what was on his foot. Kennedy got into contact with a marine biologist who works for the State, who examined his foot and confirmed a shark bite. Then, later in the day, a salmon shark was discovered less than 1 mile down shore from the attack. Apparently, it was a sick, baby salmon shark, which had washed up on the shore. 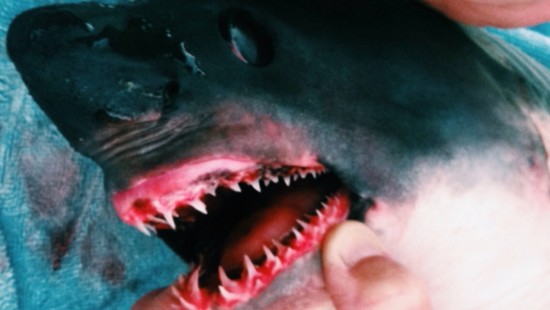 This is the salmon shark that bit Nick’s foot.

Nick was contacted by a marine biologist who is one of the world’s foremost shark experts to see if the shark matched Nick’s bite. It was in fact a perfect match! Thereby, Nick was interviewed for further statistical knowledge for the upcoming “Shark Week“. Two articles, from the Horizon, (the Westmont College newspaper), as well as the Santa Barbara News Press, were written about the attack. 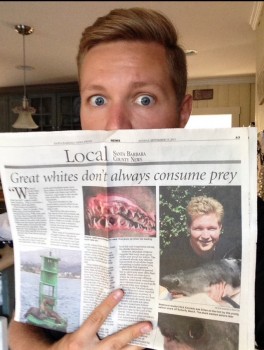 Due to the bite, Nick has undergone two surgeries. (He had developed a deep abscess). Once in awhile, Nick still has pain in his foot due to a tooth fragment that never dislodge from his foot. He is hopeful that the tooth will rise to the surface, in order to avoid another surgery. Nick is back in the water and is not afraid of another attack.

In 2003, 13 year old Bethany Hamilton lost her arm due to a shark attack at the young age of 13. She was surfing along  Tunnels Beach, Kauai  when she was bit. After the incident was announced, a fisherman said that he caught a 14- foot tiger shark.

There was evidence of surfboard debris in the shark’s mouth, as well as exact measurements fro 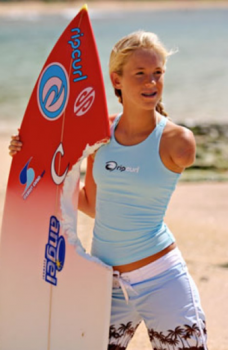 m the comparison of Bethany’s board bite and the shark’s mouth. This shark was in fact, a perfect match, just like Nick’s bite.

Bethany has continued to pursue her surfing career, even after such devastation. She became a professional surfer and is now happily married with a baby boy. She is also a motivational speaker, and she notes her Christian faith as keeping her strong and giving her hope for her future. 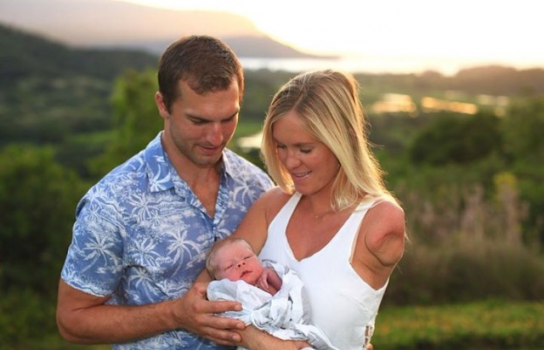 When you enter the water, you are going into sharks’ territory. Are you willing to take the risk?