Have you ever been to Butterfly beach in Montecito, California? One of the most beautiful scene in the area, walking on its sand is a real pleasure. Ocean, sun and palm trees, a dream place where if you wait for the tide to be low, you could be lucky enough to step on one of the forty-six-year-old sticky black vestige from the past… Wait what..? Were you expecting something else?

If you live in Santa Barbara, it is important to know that in January 1969, the third most devastating oil spill in the U.S history, occurred on its coast.  A hundred thousand barrels in the ocean, from Goleta to Ventura. Only the 1989 Exxon Valdez oil spill in Alaska (500 000 barrels) and the 2010 BP oil spill in the Gulf of Mexico (5 million barrels), were worst. 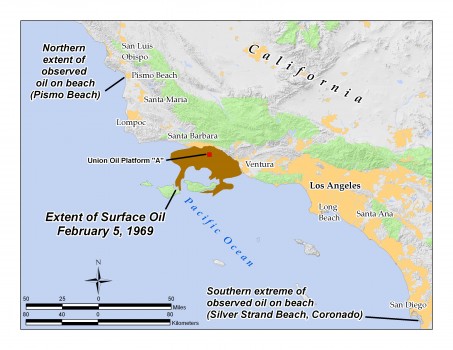 Map from UCSB Department of Geography 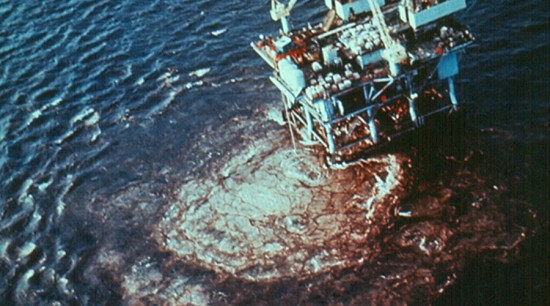 A derrick called Platform A, owned by Union Oil at the time, suffered a natural gas blowout. Three million gallons of crude oil in the ocean, 200 000 gallons on the surface spread by the winds and swells into 800 square miles. The workers were drilling down 3500 feet below the ocean floor. While replacing a drill bit, a first blowout occurred, the level of substance used to maintain the pressure was too low. When they tried to cap that first hole, it only led to an even bigger accumulation of pressure and a more dramatic explosion. 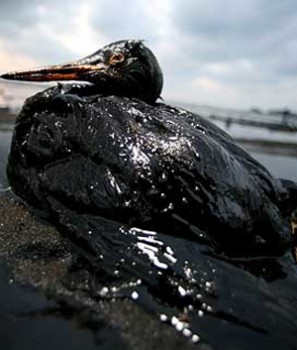 ecological impact on the wildlife

The ecological impact is still hard to fully  evaluate. All the ocean’s related creatures were, and still are affected by what happened. At the Santa Barbara Wildlife Care Center, they focused on bird populations, an example in between land and sea, to better illustrate the consequences on our ecosystem. Around 4000 birds died by contact with oil. The Santa Barbara Zoo and  other emergency treatment center for animal tried to save as many as they could, but only 30% of the treated survived. Many more species saw their population decrease considerably. As for the lucky ones who avoided it, the chemicals used to disperse the oil on the ocean’s surface made sure they would not survive. The president of Union oil Fred L. Hartley, declared that “I don’t like to call it a disaster, because there has been no loss of human life. I am amazed at the publicity for the loss of a few birds.”

“What is involved is the use of our resources of the sea and of the land in a more effective way and with more concern for preserving the beauty and the natural resources that are so important to any kind of society that we want for the future. The Santa Barbara incident has frankly touched the conscience of the American people.” (U.S. President Richard Nixon)

President Nixon came to Santa Barbara on March 21, 1969. Horrified by the damages, and impressed by the cleaning efforts, he considered a halt to all offshore drilling. He also turned the buffer zone into a protected ecological area. However, the same year in August, the ban was lifted and drilling was allowed again. The same month a company called Sun Oil received the authorization to build a new derrick, adjacent to Platform A. The installation started on November 26. It took less than a year after the spill, for oil companies to drill offshore again. 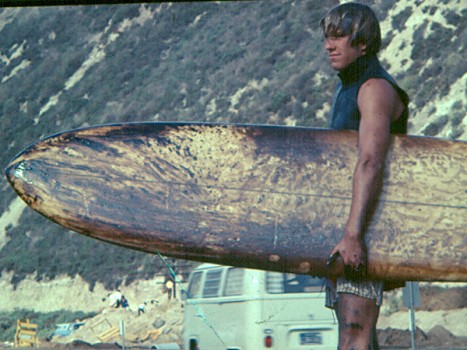 What is to remember from this disaster, is how the local communities all participated to the cleaning efforts. Get Oil Out (GOO), an organization created in Santa Barbara few days after the oil spill, gathered more than 100 000 signatures for a petition convincing President Nixon to ban offshore drilling. Volunteers invaded the beaches and the animal rescue centers to help however they could. An Earth Day was created nationwide, still in place now a day. Many would say this 1969 oil spill initiated the “environmental movement”, and it all started in Santa Barbara.

“I had been impressed by the way energetic college students, shopkeepers, surfers, parents with their kids, all joined the beach clean-up. I saw a Montecito society matron transporting oily birds in her Mercedes.” (John McKinney, Nature writer)

Even 46 years after the spill occurred, its remnants can still be found. Not only reminding you how horrific the situation was, but mostly how strong a community can be, when acting as one. 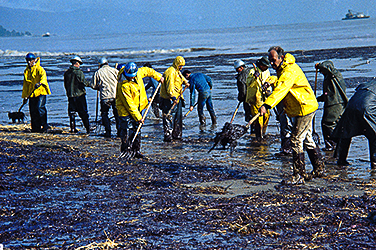