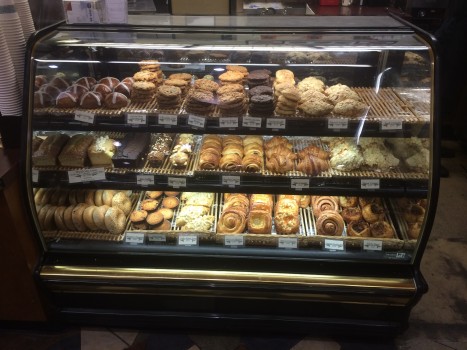 Some of the French goodies baked by Renaud

Every Sunday, if not every day, citizens of a small country have the chance to have access to some delicious pastries, such as croissants, pain au chocolat, chouquettes, chaussons au pommes, macaroons…

Of course, I am not going to do that. I am not going to complain either for the fact that the only thing I miss from my home country is the food, since I probably already bored people to death with this topic. Plus, if you haven’t been to Lyon (capital of the world for the “Gastronomie”), or in France, or just Europe in general, you would unfortunately not understand. However, what I am going to tell you is the story of one of the man that gives us access to our beloved croissant, which we used to take for granted. 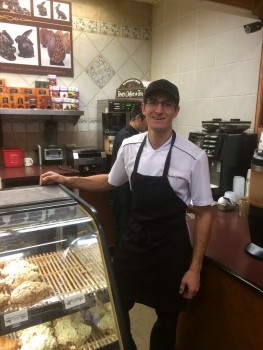 Thomas welcoming me at the location

Thank to Renaud’s patisserie and bakery, and it’s three locations in Santa Barbara, we are one step closer to France. Of course, every local foodie is aware of the talent of Renaud, and every person which is on a gluten free diet, whom I present my condolences to, won’t even know what I am talking about. But, the purpose of this article to get to know not Renauld, but one of his team member, on
which he can very much rely on. I had the pleasure to meet some of them, but there is one that I am glad to say I know personally, and it is the French pastry Chef Thomas Comte.

When I seated down with Thomas, for the first time in a formal way, we could not keep a straight face very long. Even though he has accomplished much success in his career, he is still a very down to earth person, always in for a good laugh, and a good meal. We did managed however to go through my questions, and it went somewhat like as following:

Tell us a little bit about your background?

“For me, baking was always a passion. I started to learn when I was 16, or maybe even before. I went to a school where we were both studying and working. I was at school for one week a month, and working for the rest of the three weeks, which was very beneficial for me. Once I graduated, I didn’t wanted to stop there, so I went on for one more year to pass a “mention” on chocolate. For one entire year, all I did was working on chocolate, nothing else. It is the best way to master the skills you need to bake. After that, I did the same with “assietes deserts” (plates of deserts).

When I was done, I can officially say that I hold 3 diplomas, which is definitely a plus in my field.

When I was doing my mention, I had the chance of learning in one of the most recognized restaurant, Maison Lameloise. This restaurant holds 3 stars in the Michelin guide, which is proof of exceptional quality and amazing taste.

After that experience, I worked at La Pyramide in Vienne, a restaurant with two macaroons, another high ranking. 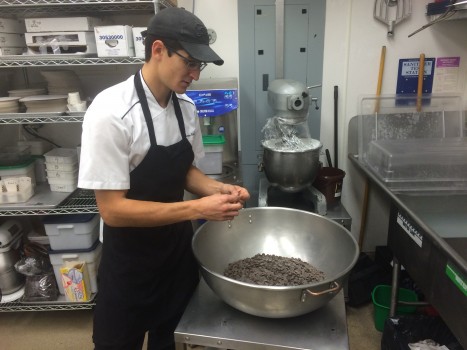 Thomas is about to prepare a Chocolate Ganache

The experience that followed is the one that really lunched my career. I worked at the Pic, located in Valence, also holds 3 stars in the Michelin guide. I learned a lot there (just like everywhere else for that matter). But, I met Quentin Bailly. Quentin asked me to follow him, which I gladly did. During the time I worked with Quentin, he became a World Bakery Cup winner, for which I can gladly say I assisted. Together, we did the opening of a bakery in Paris, named “Un Dimanche a Paris”. It received a lot of attention from the press, and it really was an amazing learning experience for me, which landed me a job with another World Bakery Cup winner: Phillipe Rigolos. Basicaly, I moved all around before, so it was a natural choice for me to take the opportunity to come to the USA”. 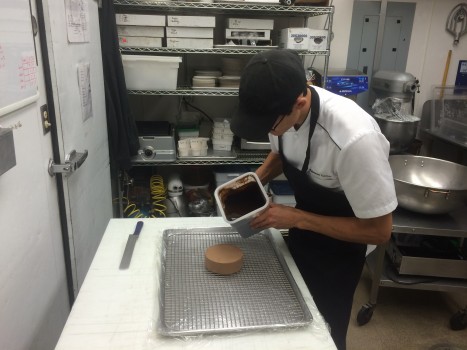 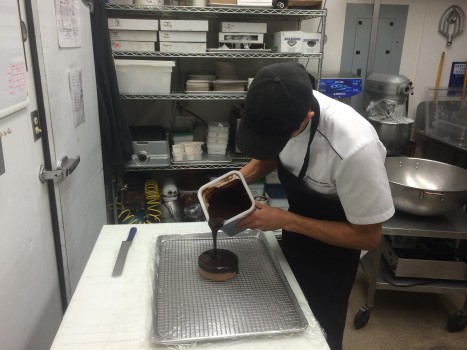 For our eyes only 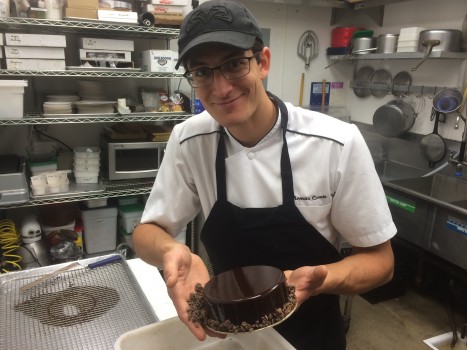 That was a piece of cake

Why did you choose to be a Chef?

When I was in school, I knew I had a passion for cooking. I wanted to become a Chef, but not in the Bakery field, more in the Cooking. I interned for a Bakery, thinking it could only be a learning experience, and I ended up loving it, so I just did it. I chose to do what I loved rather than getting stuck in places where I did not wanted to be, and it was indeed a good choice. 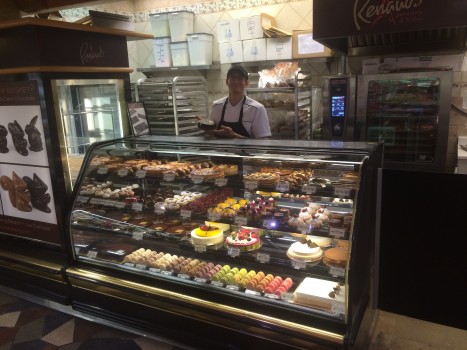 Now the decadent is about to go in the window, waiting to be chosen by a chocolate craving customer

Why did you decide to move to Santa Barbara?

I really wanted to come to the USA for the experience, but also to learn English. The brother of a friend worked for Renaud, and told me about his amazing experience. I did some research about Santa Barbara, and as everyone would, I got excited about it. So one day, I contacted Renaud, and a few months later, here I was. 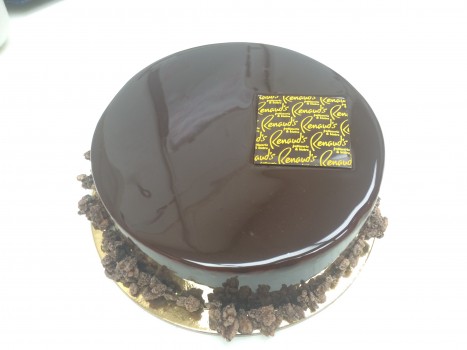 The decadent prepared by Thomas, keep in mind I did not have breakfast at this time…

How was the process of coming here?

Without going into too many details, it was hell. The process was very annoying, and it was basically a 4-month applications. But it was definitely worth it.

How is your experience here, both professional and personal?

For the professional part, I love to work in English, it is refreshing, I learn a lot, and it really makes it feel like a new beginning. The Californian atmosphere is absolutely fabulous, and as early as I wake up in the morning, I have a smile on my face. Also, there is something about here, which is unthinkable in France: people trust you. I evolved in a few months here to have my position. In France, it would have taken me years, or even decades. There are some many bakers in France, that I would be one of many, but here, people recognize us, and me, and it did surprise me. Also, I do earn a better salary here than I did in France, and added to a better lifestyle, it definitely is a plus. The stress is very different too, and it feels more healthy here, compared to the bad stress I would feel back in France, but the Sun and the Ocean is probably the cause.

For the personal experience, it is a continuity of the professional one. The weather is a lot better, people are friendly, I love the Californian mentality more, and just the culture in general, except maybe for the food, but I am a Chef, so it is in my roots to say that there is nothing like a good French meal (no offense America, but I agree too).

What would be the one thing you would want to tell our reader?

I would tell them how Bakery is a beautiful field. I have said it before, but I am happy to wake up early every morning because I am passionate, and it makes everything feels like I am not actually working, so the one thing I would want to say it do what you love to do.

When I do something, I give 100%, or otherwise, I just don’t do it. I suggest anyone to do the same. I know it might sound a little bit cliché, but it is still true. As we say in France, “la Patisserie, c’est l’amour du travail bien fait”, which translated means “Bakery is the love for the well done work”. 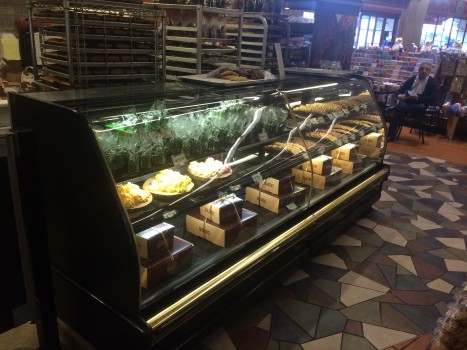 Now, the interview is over, time to get a good breakfast

Even though I knew Thomas, I wasn’t aware of all his experience. I am glad I took the time to interview him, as I learned a lot from this hard working Chef, which I want to thanks once again for his time, as well as Renaud for allowing me to enter his kitchen and take pictures. I encourage everyone to go and try their products in order to know what French Bakery is all about, and in the meantime, to take Thomas’s experience as an example for hard work.