Trending Now
You are at:Home»Features»This is Our Coast: SB Locals Speak on Refugio Oil Spill

Santa Barbara is known for its beauty and grace. And its ecologically-minded citizens.

There is nothing more ecologically outrageous than an oil spill. Just like the 1969 Platform A spill, the Refugio Oil Spill is not being overlooked. We brought the world Earth Day and we will show you how much we care. I had a personal concern for the local Marine Protected Reserves at Coal Oil Point/Devereaux Beach.

East of Refugio and only a 30min drive from the site of the spill sits this beautifully pristine beach. It is home to amazing tide pools, brown pelicans, cormorants, and the endangered snowy plover. The beach, from Campus Point below UCSB to the end of Sands Beach is a Marine Protected Area. It is here conservationists docent the snowy plover nesting grounds from possible harm. The snowy plover is no bigger than the common sparrow and nests directly in the sand dunes. Their eggs are as small as quarters and very fragile. One step can disturb multiple nests. Sands Beach is ideal for these birds because they feed on the invertebrates in the soil and beach wrack washed up on shore.

“Hopefully it is a wake-up call. People are feeling impacted a bit. I have lived here ten years and its absolutely gorgeous. It’s such a pristine beach and it would be absolutely terrible if it wipes out the area.”

The tidepools form Coal Oil Point. In addition to being part of the reserve, these tidepools are an active NOAA monitoring site. Every set day someone comes out and does an organisms and soil count and logs it into the NOAA system. This helps for knowing which organisms inhabit and survive in our tidepool and how the environment impacts them. 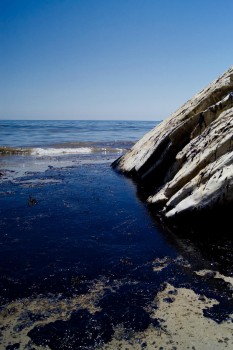 On the bluffs sits the UCSB research facility, part of the UC Reserve system. It is home to ongoing land and sea research, masters projects, and the Gray Whale Monitoring site. This is a wonderful vantage point to observe birds and mammals in the area, as well as a human aspect since it sits above a popular beach and smack dab in the middle of UCSB. It is perfect for the whale counters because they have the perfect angle to catch every whale migrating through the beautiful channel.

Adding to the beauty of this beach is the wondrous kelp beds. Kelp grows all along the channel and creates underwater forests, home to all types of creatures. And great diving sites. These kelp beds feed and protect organisms on and off shore.

“I am honestly heartbroken. I’ve recently been diving and surveying the kelp forests near the area, especially the ones right near Refugio and IV. These are simply incredible, colorful and delicate masterpieces of diversity.” — Daniel

This beach is fun, educational, engaging, and a social hub for the locals. And now, it is threatened by a preventable oil spill.

Today I headed out to see just what the residents and users of the beach had to say. I felt it was imperative to get thoughts and ideas on the spill and its potential impact on this environment from the people who frequent this area.

Here is what I heard:

A man whom introduced himself as Brad had this to share…
It just makes me sick to think about. I grew up here: surfing, tidepooling, walking my dogs, playing with my kids.

A man out for a run stopped to talk…
Hopefully it is a wake-up call. People are feeling impacted a bit. I have lived here ten years and its absolutely gorgeous. It’s such a pristine beach and it would be absolutely terrible if it wipes out the area. I was disappointed with the slow response of the company and the cleanup. Keeping my fingers crossed that [they]step-up and really take notice. 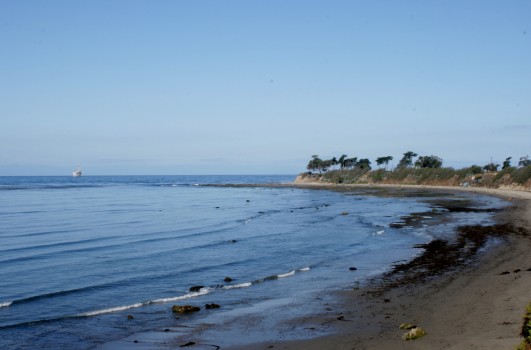 The beauty of Devereaux Beach under eye of big oil. The platforms are a constant reminder of the power and danger of oil waiting in the channel. Photo: Sarah Villalobos

A commercial fisherman out for a bike ride had these comments…
It’s a huge commercial zone now completely unproductive. My friend called me yesterday and said he has 200 lobster traps in that zone. All that is lost. It [oil]is sinking to the bottom killing all the stuff on the bottom. Lobsters. Crabs. Sea Urchins. And the response was horrible. Itll be a while before it reaches here hopefully. Hope they pay those guys [fishermen]based on their tickets. They are displaced now.

A UCSB student was resting on the cliff edge above the tide pool when I stopped to take pictures of a pelican flock. She had this to say…
I am from San Diego and I’ve never had one so close to home. It’s very sad, devastating to hear something like this can affect our wildlife. I work at the reserve and it’s so hard to hear the updates every day. It’s frustrating. I work to protect them.

I was lucky to catch members of the gray whale counters out today, keeping an eye on the migrating animals. Luckily, none were sighted today but a mom/calf pair passed by yesterday. Hopefully they will be spotted by the whale counters in Piedras Blancas tomorrow, signaling they made it past the spill. Wednesday a 3-whale pod was near the spill and helicopters were brought in to attempt to guide them away to no avail.  Whales are just passing by. The bottlenose dolphins, pinnipeds, birds, plant life, and fish living here will be greatly impacted.

After I also reached out to former biology classmates and friends I have waded through the tide pools with. I asked them for their personal feelings about the situation and their thoughts on the environmental impacts.

Daniel, UCSB biology student and diver-
I am honestly heartbroken. I’ve recently been diving and surveying the kelp forests near the area, especially the ones right near Refugio and IV. These are simply incredible, colorful and delicate masterpieces of diversity. The news has made it clear that if this oil gets anywhere near our skin, or if we inhale even just a little of its fumes, we could experience dangerous levels of intoxication. So, how will it affect organisms that filter, breathe, and live in the water? The news will only cover the large dead animals that die and make it to the beach, but the true catastrophic impact of this will go unseen, and will persist over months to even years. It may never even recover to what it used to be. 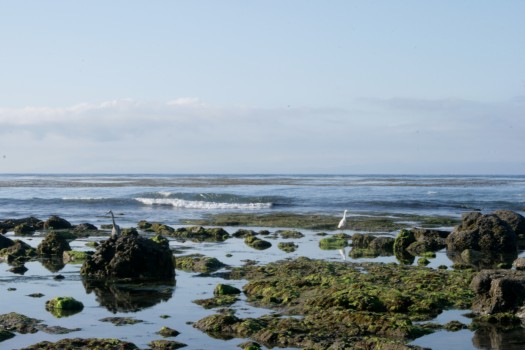 An egret perches in the early morning sun on the exposed tidal rocks. These tidepools provide food for may animals and shelter for the organisms living in them. Photo: Sarah Villalobos

Zack, SBCC biology student, freediver and fisherman-
I grew up diving Refugio/ Goleta and to see that a major portion of the Goleta coast is shut down to fishing hits close to home for me. I have had the privilege of taking some quality fish free-diving those waters, and with the summer approaching I am gearing up for another season of good diving. I hope the annual White sea bass spawn / grunion runs / halibut spawn/ feed aren’t hindered by the oil spill.

Jacey, SBCC biology major-
Well it’s just very sad. We’ve been trying too hard to keep these areas protected and marine organisms healthy, but this type of spill just pushes us back. Watching humans induce pain and suffering for their own monetary desires (the sole driver being oil) is unfortunate. I do understand the need for some pipelines at this time, but I think this spill should open our eyes and make us realize we need to make changes.

After meeting so many people, I began to regain some confidence that I was not the only one feeling emotional about the threat to our beaches and wildlife here in Goleta. Santa Barbarians are notorious for their environmental plights and this just shows that is rooted deeply. It is all about the beaches and the animals here, without them Santa Barbara would not be the glorious place it is. Since Devereaux was acquired by the university in the usual way-old money-, there are some parts of the estate are left over. One of these pieces is known as “the jailhouse,” the former beachhouse of the now ghost estate. It has become an unofficial billboard for artists over the decades and someone has already expressed their opinion on it… 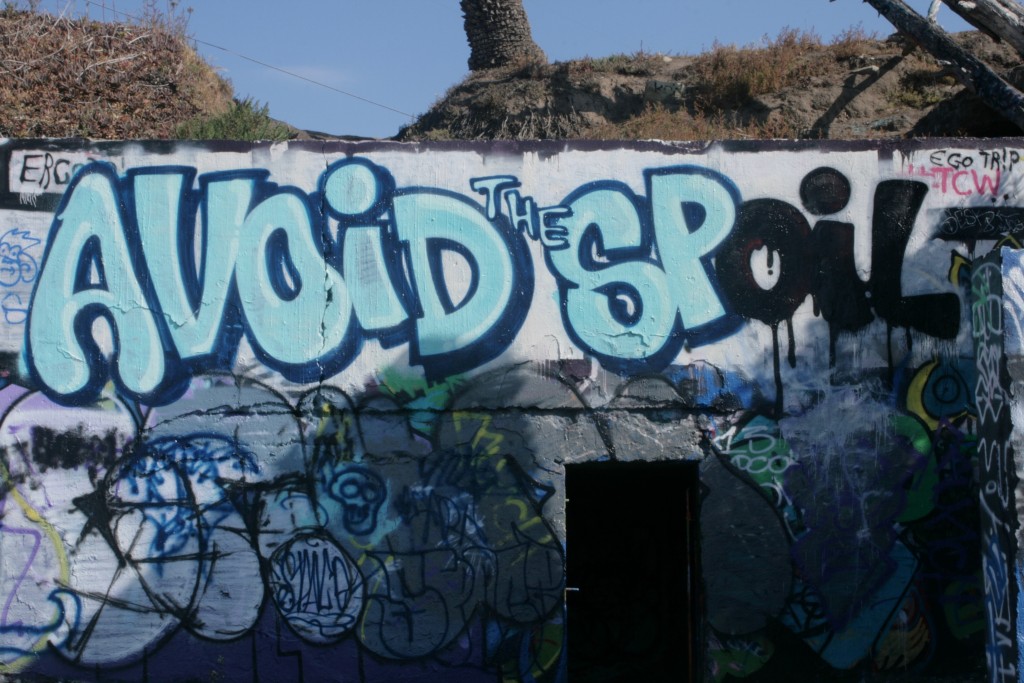