Trending Now
You are at:Home»Features»In Our Backyards! An Interview with Katie Davis, SBC Water Guardians

“It will not only contaminate our ground and drinking water, but will also pollute the air we breath”, these are the words of Katie Davis, representative of the Santa Barbara County Water guardians, when asked about her opinion on fracking, steam injection, and acidizing.

In a recent interview led with Katie Davis, media relation for the Santa Barbara County water guardians, I tried to get answers to important questions about Measure P, about fracking, about the relentless efforts from organizations and volunteers to get a YES on Measure P. And the answers were shocking. Read for yourself.

Hydraulic fracturing, or fracking, is the process of “injecting fluid-mostly water and sand, but with additional chemicals- into the ground at a high pressure in order to fracture shale rocks to release the hydrocarbons, including natural gas, inside.” 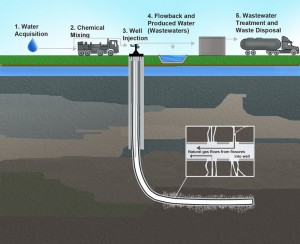 Illustration of the process of hydraulic fracturing

Steven: Who are the Santa Barbara County water guardians and why were the   founded?

Steven: Who are these supportive groups, who are supporters of Measure P and what is their drive to support a Yes on Measure P?

Katie: In an effort to promote Measure P, the SB County water guardians, with the help of supportive groups, are able to mobilize an “army of volunteers”, retirees, working people, students, and other concerned people, to go knock on doors and inform people about the risks of fracking and acidizing. The next two weekends before the election are packed with rallies and events to get people to vote Yes on Measure P. Last Wednesday, we had a public rally in Santa Maria, which attracted more and more people over the course of the afternoon. According to KCBX, a local, central coast radio station, a No on Measure P demonstration countered the Yes on Measure P camp, but the Yes side was able to attract more supporters over the course of the afternoon. 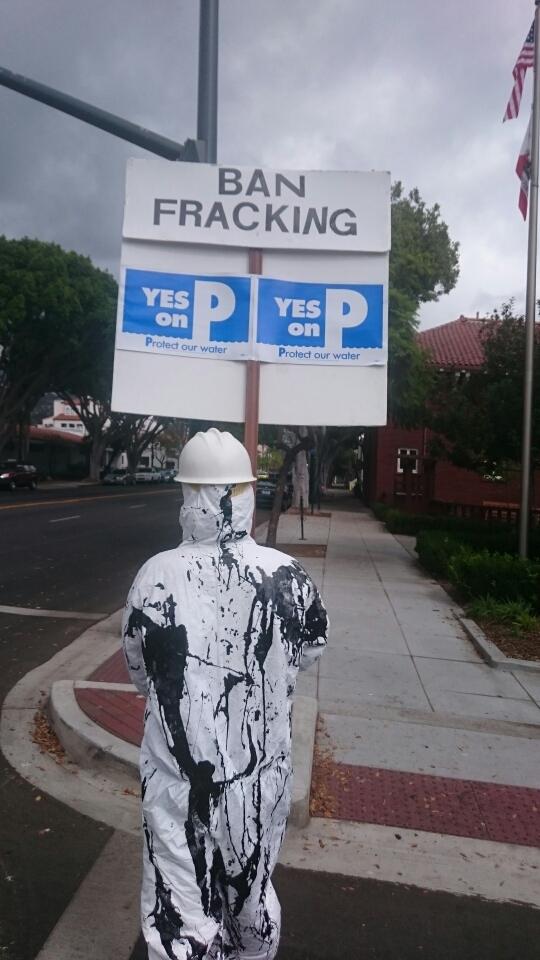 Volunteer in oil-covered overall demonstration for Yes on Measure P

Our advantage in this campaign is that we have most of the elected officials of Santa Barbara County on our side. We were also able to motivate members of the oil industry to talk on our behalf, get nurses and healthcare physicians to write professional letters about the effects of fracking on health, and we were able to get the backing of the Democratic Party. The local community is really helpful, with numerous volunteers and professionals joining our cause in gathering votes.

Steven: About how harmful is fracking and acidizing to our ground and drinking water, as well as our water reservoirs?

Katie: The water is not only polluted with oil, but also with thousands of chemicals and even radioactive materials. For the steam injection, water needs to be heated up to over 500 degrees. Prior to gathering signatures to get Measure P on the ballot, we carried out a project that brought shocking results. Out of the 136 fracking wells tested, an average of 300,000 gallons of water were wasted each day. In all this cases, the process is on going, meaning that millions of gallons of water will be wasted during the lifetime of a single well. Our study also revealed that the air pollution caused by wells is equivalent to the emission produced by 17,000 cars. According to an Environment America report “Fracking by the Numbers, an average of 280bn gallons of water were used during the fracking method nationwide in 2012. In 2013, an estimated 80 billions gallons of water were used in enhanced oil recovery operations. 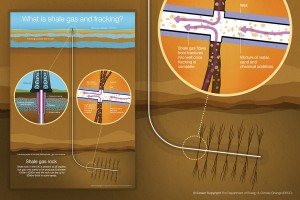 Steven: But the pollution is not only limited to ground and drinking water reservoirs?

Katie: No, this is not the end to the story. There are various high-risk consequences for fracking in Santa Barbara County. By injecting high-pressured water into the ground, this water has to escape at one point. One channel of escape is through the well, where flow back fluids mixed with chemicals are reaching the surface and further dissolve into the air and pollute our environment even more. This water contains hazardous chemicals, many of them known to cause respiratory and skin problems, as well as other negative side effects. Another negative impact is thatonce under ground, companies have no more control over the chemicals and water. They could dissolves the shale rock, but could also break through the ground and reach water reservoirs and creeks. Once in the water, it is nearly impossible to extract all the chemicals. A third risk is earthquakes. We are sitting and living on active earthquake faults, and now we are going to dig deeper holes in our already shaky ground? In recent years, a multiple earthquakes were reported next to Youngstown, OH, with the strongest one reaching a magnitude of 4.0 (A NY Times report shows that the earthquake was not cause by fracking itself, but by injecting escaped fluids (water with chemicals) into underground disposal wells)

Steven: In election campaigns, a lot depends on financial support and the ability to raise awareness among people. How do you explain the massive differences between both camps when it comes to Measure P?

Katie: “We knew from the beginning on that we would be radically outspend by the other side”, but we were still able to raise about $300,000 in funding, enough to do our campaign based on volunteers, word of mouth, and posters, flyers, and signs. In comparison to the opposing side, we were not able to run expensive commercials onTV. Financial differences are enormous, with the No on Measure P being able to gather millions of dollars to support their case. We talk about multi-billion businesses like Chevron, Aera, and Freeport that contributed large amounts to get a No on Measure P. And their environmental records are nothing close to be clean.

Steven: Do you feel positive about Measure P and that you will win the election?

Katie: Yes, I am confident that with the help of volunteers and supportive organizations we are able to get enough people to vote Yes on Measure P. We were able to add the initiative to the ballot with over 16,000 valid signatures, and able to reach many more people since then. Together with elected officials, public figures and supporters, we are able to spread the word and get people interested in Measure P. And although the No on Measure P tries to scare people by advertising that a Yes on Measure P would mean the loss of thousands of jobs and millions of dollars in our economy, their claims are unfounded. Measure P does not affect any existing jobs, and conventional oil wells will not be closed due to Measure P. Nobody will be laid off, and the oil industry will still run at normal pace on their conventional oil fields.

After the interview, Katie Davis provided me with a video that is supporting the Yes on Measure P campaign.