Trending Now
You are at:Home»Features»Social Justice»Do you Enjoy the Circus? The Animals Don’t.

Animals in circuses have everything that is natural and important to them taken away, and are beaten and forced to perform tricks for our entertainment.

The circus had just arrived in town, like it does every year. My best friend and I had been preparing for weeks. We ripped down the posters that they had put up – the posters with big elephants on the front of and all the colors surrounding it. The “happy” elephants, the elephants that spend their lives in cages, traveling from city to city without proper care. Yes, those animals, which go through physical punishment as a standard training method. Reality check, it is not common for elephants to know how to stand on a ball. Those posters are a real eye catcher.

It is winter, freezing cold. We are standing in front of the entrance waiting for people to arrive. We have gotten all the information we need from the animal organization we are representing. The flyers are in our hands, ready to be distributed. The circus employees are staring us down. They try so hard to make us leave. “No dude, we are not going anywhere.” We are ready for this.

“Hey, we are from NOAH, the animal organization. I just wanted to see if you had a second before the show starts, to discuss what you are about to see when you walk in that tent.”

“At NOAH we are trying to encourage the circus to stop using animals as a part of their show. We have a flyer that has some pictures that describe the pain and suffering these animals go through on a daily basis.”

Their eyes are on us. They look down on the flyers, then back up at us. “No thank you,” she says and tries to walk past me. “I just think it is important to know that these animals did not choose this life, and they are not created for us to use as entertainment. They are wild animals, and this climate is not for them.” We continue to push. She stops, looks at me. A breakthrough? Does she understand that we are doing the right thing – That these animal deserve better?

A moment of silence.

“Shut up. Can’t you see that I have children. Find something better to do with your time.”

A man comes up to us, “I really support what you guys are doing. I think it is amazing that we have people like you that are trying to make a difference.” A smile appears on our faces. Finally, someone understands. We get ready with our information and hand him a flyer, he politely declines and continues walking towards the circus tent. “It is animal abuse,” we say. He nods, but continues walking.

One rock hits us. Two rocks hit us. Did he just spit at me? Yes, he did. We take a step back. The circus employees are laughing, mocking us. Really dude? Stop. We walk to the back side of the circus and look at the elephant. We are ready with our cameras. The elephant is swaying back and forth, back and forth… back and forth. They will tell you that is because the elephant is dancing or that it is because they sway to their own heartbeat to keep themselves calm. Maybe you have seen other animals doing similar things, like lions pacing, parrots pulling out their own feathers, or an animal licking the same spot over and over again? Repetitive behaviors like these are common in circus animals, and caused by stress and boredom. 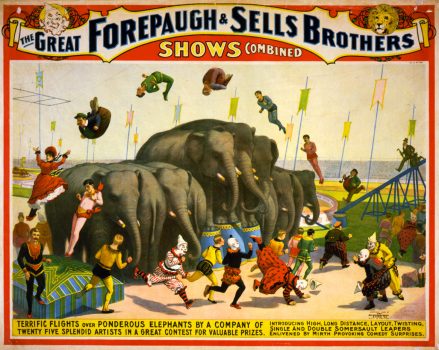 The circus industry works hard to portray their activities as “fun-loving experiences,” but this is not the reality for the animals. Training methods include bull hooks, metal pipes, electric shock collars, whips, and more. The bullhooks, also known as elephant hooks, apply pressure on certain sensitive spots on an elephant’s body, causing them to move away from the source of discomfort. The bull hooks are usually used on areas where the skin is very thin, like behind the ears and around the eyes, as well as on their feet and around the mouth.

The only way a human being can rank above an adult elephant and many other wild creatures, is through fear, and learned helplessness. Wild animals will never be completely predictable when performing unnatural stunts, so trainers use these methods to maintain a position of dominance. The circus animals lives have become an endless circle of boredom, stress and pain. The abusive training techniques, the lack of socialization with other animals, and other important factors that wild animals need, cause these animals to become so dangerous that they often lash out on trainers. 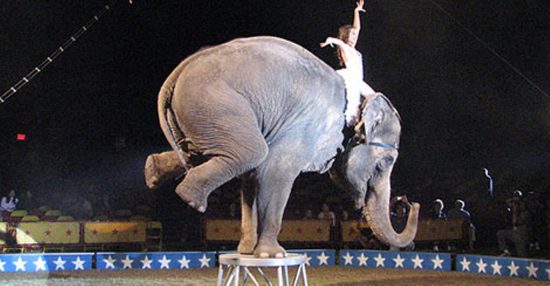 Today, children are being taught about wild animals in school. There are programs such as the Animal Planet and the Discovery Channel that help educate the public about these animals. It teaches them about their instincts, what they eat, how they live, and more. It is very confusing for children to learn about this, and then go to the circus which has the complete opposite message. The circus claims that they train their animals to only do tricks that they might naturally perform on their own in the wild. There is nothing normal about tigers jumping through fire and elephants balancing on their heads. Circus does not give an accurate image of how wild animals behave and how they live. This creates a big disconnection between people and the wild. What the circus is ultimately doing is promoting that animal abuse is acceptable, and that wild animals are ours to use at any cost.

On May 21 this year, after 146 years, Ringling Brothers Circus had its final show in New York after experiencing a decrease in ticket sales. Animal Rights campaigners were happy to see the circus coming to an end. Both PETA and The Humane Society of U.S have long accused the circus of animal abuse. Lisa Lange, Vice President of Communications in Peta, told NPR that the decreasing tickets sales are a sign that people no longer are interested in this kind of entertainment. “We believe it’s because they now know what that kind of entertainment costs those animals,” she concludes.

Lawmakers are now joining forces to introduce a bill that will ban the use of exotics and wild animals in traveling circuses, or any other entertainment acts on wheels. The bill, Traveling Exotic Animal and Public Safety Protection Act, will require the 19 traveling circuses in the U.S. that are currently using animals, to make the switch from animals to human entertainers. If this bill gets passed, it would mean that more than 200 big cats, camels, bears, and elephants no longer will have to live a life on the road working for these circuses.

How can you help?