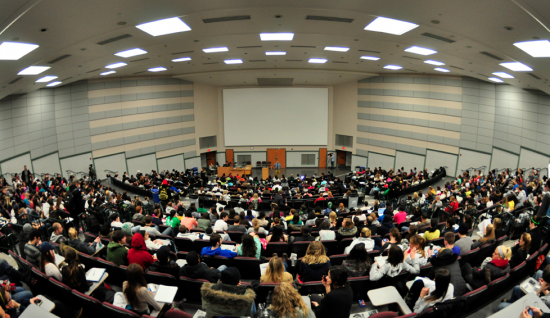 The future is international studies and the importance of exchanging culture and habits. Shara Keller, former academic advisor at Antioch University Santa Barbara, believes that international studies is something “positive” and she loves to hear success stories about students. When asked about the future of colleges across the country and whether the tuition fees is going to decline, she was a bit skeptical. Keller believes that tuition fees are going to be the same, especially “with the administration we voted for.” Keller also shares that so far President Donald J. Trump hasn’t put so much emphasis on international students, and this is evident by the 45% drops in international enrollment. Keller wants to see a “Universal School System’ where students don’t have to struggle to transfer into undergraduate programs.This is something we should put focus on; Make it easy for students to cross borders in the education system.

Students travel around the world to get their education, and it is extremely beneficial to study in another country. Studying abroad should be encouraged because students expand their knowledge of other cultures learning to empathize with different people around the world. America is the leading country in receiving international students, but there are so many controversies and problems that arise from this subject. The main goal is to educate young people, and teach them about our world. It is critical that students and institutions are not impeded by money burdens when it comes to offering educational opportunities. The true value of being a domestic or international student is learning, and financial roadblocks should never get in the way of true learning and real-life experience.

Cavid Gasimov is originally from Baku, Azerbaijan. He grew up in Sweden where his family moved when he was 8 years old. He graduated High School in Sweden and moved to Santa Barbara for college. He is currently pursuing a BA degree with double concentration in Business and Marketing He has helped his family to open and manage various of businesses in Sweden. Cavid also speaks 5 languages including Turkish and Russian. In his free time, he is mostly with his friends, or on the phone talking to his long distance family, and he also dedicates a lot of time to soccer.