Reduce, Reuse, Recycle- But How?

Here in Santa Barbara, CA, sustainability and environmentalism is a priority. Since the oil spill in the 1969 right off the coast of this little Californian town, Santa Barbara has been putting great effort into sustainable living and in trying to raise environmental awareness.

Just recently, I shot my first documentary, A New Wave of Hunter-Gatherers, a sneak – peak behind the scenes of three students dumpster diving, who ultimately opened my eyes about the immense food waste in this country. It got me thinking, what can I do? I was unsure if I would be willing to jump into a dumpster every other night. Yet I wanted to make a change in my life. Having been born and raised in Germany, I am used to recycling, to composting and to even separating the different colored glass bottles. But besides recycling, what else can you do at home? I came up with these four ideas. 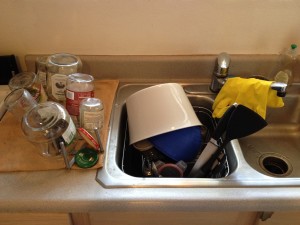 Who does not like pickles? And tomato sauce? And French dijon mustard? This list could go on, but the one thing all these items have in common is that they usually come in glass jars. Next time you want to enjoy the last pickle as a side to your Reuben sandwich, don’t throw out the jar, but clean it and reuse it. It’s great storage for leftover food from the night before, or even as a container for your coffee to go.

2. Bring Reusable Bags to the Store 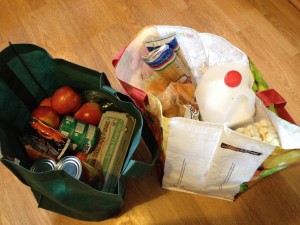 We all know how chit chatty the employees at Trader Joe’s are; last time I went, I had a conversation about Germany and how he knew that any bag, whether paper or plastic, had to be purchased in German grocery and drug stores. It is much more common in Germany to bring reusable bags. Trader Joe’s, owned by German grocery store Aldi, is going to only sell their recyclable brown paper bags for ten cents each starting on May 14, 2014. This is due to the city’s “Single-Use Carryout Bag Ordinance” plan, which of course does not only include Trader Joe’s, but any store selling groceries or pharmacies. Additionally, this plan will ban plastic bags. Hopefully, this will change our minds finally. In Germany, such a plan worked well, since we tend to be stingy and would never want to pay 10 cents for a plastic bag.

Now, just to reiterate: bring your own bags, or backpacks, or old paper bags, any bag to the store. Just keep it in your car, in your purse, or always by your door so that you won’t forget it. 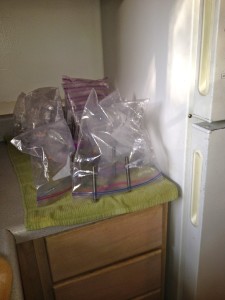 We all know them, we all use them or have used them at one point: Ziploc bags. They are great for bringing sandwiches or chips. However, we might be able to just use the jars shown above. If you do want to use Ziploc bags, have you ever thought of reusing them until they break instead of throwing them away after that one-time use? It’s easy: you just turn them inside out, wash them thoroughly, and tada, you can reuse them. Imagine the impact this would have, if everyone would do this? 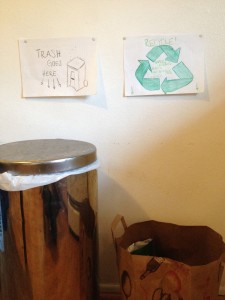 Last but not least, recycling! I would argue that, if done correctly, this is the easiest one out of all four examples. Since we throw away our trash anyway, why not separate the most obvious? Plastics, papers, and glass from food scraps and other trash. It is not difficult, yet it will make a difference. If you want to go big, consider composting! You could use the compost as organic fertilizer in your garden, but beware of city ordinances. I have gotten in trouble for composting my front yard, which is not allowed in the city of Santa Barbara. They only allow you to use compost in your backyard. Frankly, this should be one thing this environmentally conscious city could change.

If you want more info on what items are recyclable or even what you can compost and what not, check out these resources:

“How Do I Dispose Of..?” by the City of Santa Barbara