Trending Now
You are at:Home»Features»What Defines The American Dream Today?

The American Dream is considered an opportunity for success, and according to Adams, success is earning money. For others, success is all about family and happiness. My ancestors emigrated from Sweden to the United States, hoping for a better life. During that time, the definition of The American Dream was something different compared to what it is today. Back then, The American Dream was more about survival rather than success in terms of money. When one struggles to provide food and shelter for their families, any change for the better is success. The great majority of people who emigrated from Sweden to the U.S overcame difficulties and became successful in their eyes. A few years later, my ancestors returned to Sweden financially strong and were able to buy land and start over but this time with a more stable foundation. We do not need money and fancy cars in order to call ourselves successful. Sometimes food and a roof over our heads is what we wish to have and therefore, my ancestors were living what I define as The American Dream. 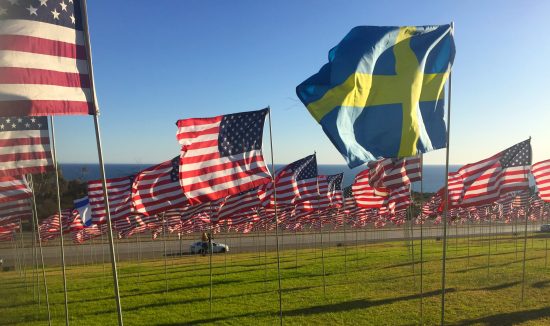 April is from Sweden. She came to the United States three years ago without any expectations. April believed she had the same opportunities to reach her goals in the U.S as in Sweden. “The reason I moved to the United States was that I wanted to start over and try something different.” April believes, “With high student loan debts and not being eligible to work, it is very hard to achieve my goals as an international student.”  Yet, the world still sees America as the land of opportunities. There are around 1.18 million international students in the U.S today. The American Dream is not dead for international students — but it can come at a cost. April explains that for her, it is a dream about freedom and success in terms of happiness.

Gabriela grew up in Peru and was living there until a couple of years ago with her husband and their two young children in a poor town.  Gabriella admitted, “we were working long days for a minimum salary, which made it hard to provide enough food and shelter for the family.” Gabriela and her husband knew that they had to do something about the unsustainable situation. “I moved to the U.S not only to fulfill my dreams but also my families dreams. I have been on both sides, but today, I can finally say that things are going well for my family and me and compared to our lives before, we are now living the dream.”