Trending Now
You are at:Home»Features»The UEFA Champions League: For club, money, and glory

Two hard-fought games over two legs between the four best European teams this season. At the end Barcelona and Juventus Turin remained victorious, while Bayern Munich and Real Madrid had to accept their defeats. 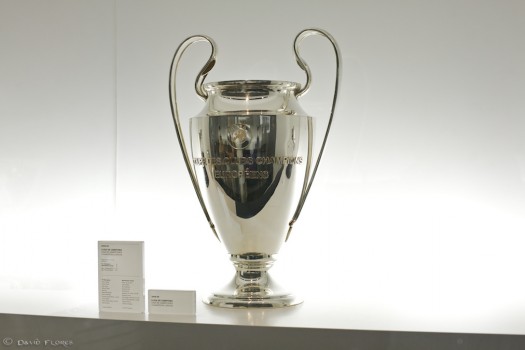 The biggest prize in club soccer is the Champions League Trophy

The host city and stadium for the 2016 Champions League Final: San Siro, Milan

While changes occurred over the past 23 years, more changes will come for the 2015-2016 season. For the first time, the UEFA Europe League winner will automatically qualify for the group stages of the Champions League, unless the team already qualified through their respective league. All the other teams get allocated through country coefficient, a system used to determine the ranking of the different football associations in Europe. The best three countries over the past 5 years (Spain, England, and Germany) all have 4 teams in the race to win the top European crown. All in all, the UEFA expects around 76 or 77 teams to be part of the initial process, with only 32 qualifying for the group stage.

But all this information is only relevant for next year. This season is not over yet, and with both final teams found, it will be interesting to see who will claim the title from last year’s winner Real Madrid. 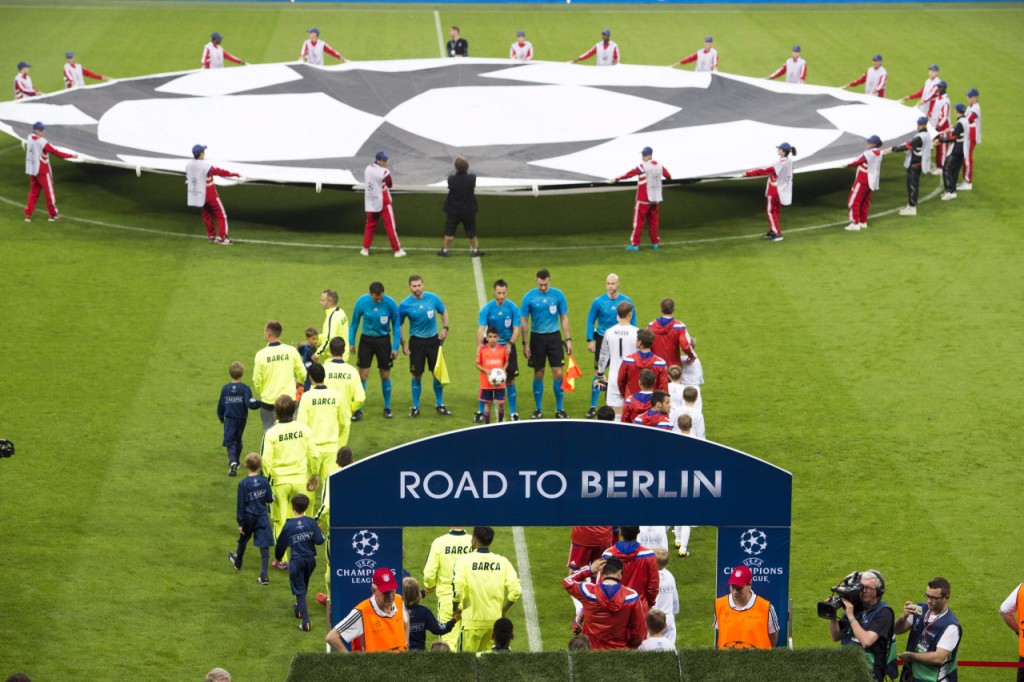 Players entering the pitch for the second leg of the Champions League Semi-Final (Photo: Tumblr)

The first team to qualify this year was FC Barcelona, Spanish league leaders, with an impressive performance over former and new German champions Bayern Munich. With an impressive home performance in the first leg, and especially due to superstars Neymar, Suarez, and mainly Lionel Messi, Barcelona was able to clinch a decisive 3-0 home victory over the at the end of the season struggling German champion.

The second leg in Bayern vs. Barcelona showed some insane football skills (GIF from Tumblr)

Under the motto “Eine Stadt, ein Traum” (“One city, one dream”) the Bayern fans frenetically cheered their team on in the second leg and with an early lead after 7 minutes, many started to believe in the “Miracle of Munich”. But with two defensive mistakes and 2 goals conceded, all the dreams were rapidly crushed by Barcelona’s star ensemble. At half time, Bayern Munich needed 5 (!) more goals in order to qualify for the final; Mission Impossible for the reigning German champion and cup winner.

With a strong second half display and powerful dedication and show of character, Bayern Munich was able to regain the lead and kept on fighting to score more against Barcelona. At the end, Pep Guardiola’s team won 3-2 against Barcelona, but lost 3-5 on aggregate. Barcelona was the first to qualify for the 2015 Champions League final in Berlin, for the first time since the 2010-2011 season.

And also the second semi-final was hard-fought over two legs, with Juventus Turin claiming the upper hand over Real Madrid. After clinching last years’ title, Real Madrid was eager to qualify another time for the Champions League final. Facing the underdog from Turin, Real Madrid had to win at home in order to make it through to the final to face their fierce rivals from Barcelona. 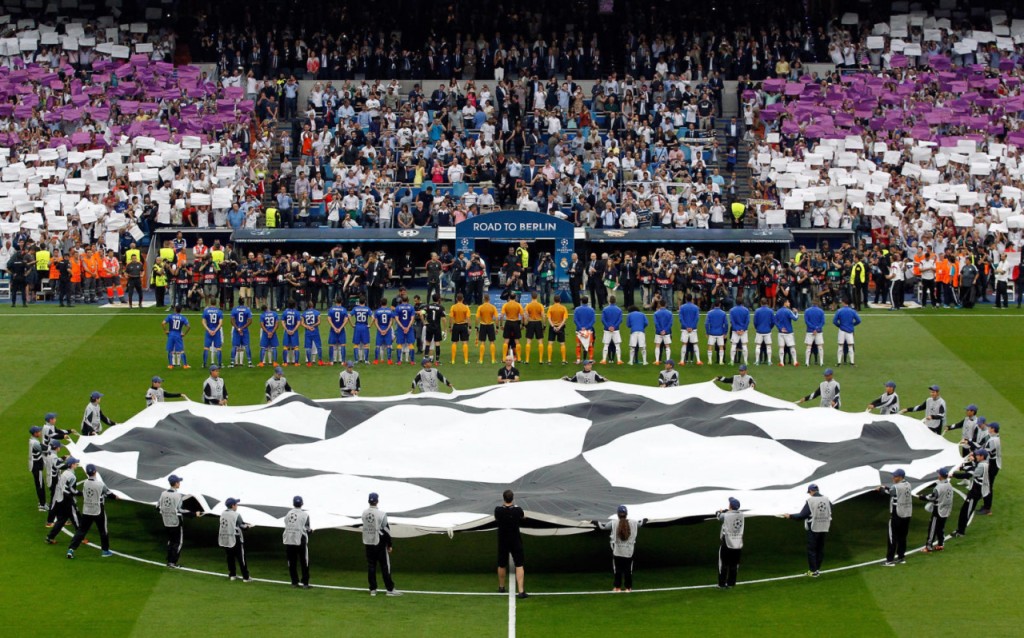 Players listening to the Champions League hymn with fan choreography in the background (Photo: Tumblr)

With many soccer fans in Spain and all around the world hoping for an “El Clasico” for the Champions League crown, many underestimated the strength of the reigning and new Italian champions Juventus Turin. With tactical finesse, strong dedication, and the hope to reach the final for the first time since the 2002-2003 season, Juventus tried to defend their 2-1 lead from the first leg against a strong Real Madrid team. 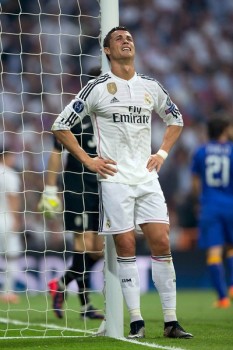 CR7, Real Madrid superstar and one of the best soccer players in the world, during the Real vs. Juve game (Photo: Tumblr)

With Real Madrid controlling the game and putting a lot of pressure on Juventus, it was a foul in the 21st minute that brought the big chance for Madrid to take the lead. After a light contact inside the box from Chiellini on James Rodriguez, Christiano Ronaldo took the opportunity to score the resulting penalty. With the 1-0 lead and the away goal advantage, Real Madrid would be through to the final. Although Real Madrid seemed in control and had good goal scoring opportunities, they never seemed determined enough to extend their lead.

The lack of a second Madrid goal gave hope to Juventus who used a huge opportunity in the 57th minute to score the 1-1. Ex-Madrid player Morata used a strong header from Pogba to equalize, putting Juventus back in the driving seat. Madrid now needed 2 goals in order to make it to the final, or one goal to reach over time. Although piling on the pressure, Madrid never seemed eager enough to score, and with fast paced counter attacks, the Tifosi always posed a threat to Madrid’s advances. At the end of the day, Madrid was not fortunate enough to score another goal, which allowed Juventus to advance to the final due to a 3-2 aggregated victory.

The financial value of reaching the Final

Reaching the semi-final is not only a sporty achievement, but also a financial one. The Champions League has a huge financial value, and by reaching the semi-final each team has already received over €45 million ($51 million) excluding ticket sales. With another €6.5 million for the runner up ($7.3 million) and €10.5 million for the winner ($12 million) the Champions League has enormous financial incentives. This money is highly needed to strengthen the squad in order to stay competitive over the next years. And to add a little more incentive to the Champions League, the UEFA decided to increase the overall money rewards for next season, with the winner expecting around €75 million ($85 million), up 46% from this year. 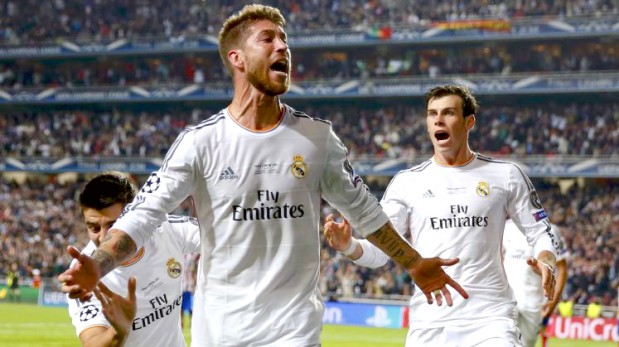 The Winner of the 2013-2014 Champions League season were Real Madrid, claiming their 10th title. (Photo: Wikipedia)

But this is a story for next year for Juventus and Barcelona, which are focusing on the preparation for the Champions League Final 2015, June 6th in Berlin. With Juventus Turin already Italian champions, their focus will be mostly turned towards the Champions League Final in Berlin. Barcelona on the other hand needs one more win in the Spanish league seal the deal and claim their next title.