Some people claim that children are the greatest blessing of all, and that we should always cherish the gift of life. What we all know, however, is that all gifts come with a price tag, and sometimes what you get is not worth what you pay.

This is the case with children, except that while we ourselves won’t suffer the consequences of our childbearing bonanza, others will. The issue of overpopulation has been debated but never properly addressed, since no one really wants to say what we all know.

We need to stop procreating, and we need to do it soon.

Our species is selfishly destroying the only planet we know that can sustain life, and we seem to not think twice about it. We are using our imagination to come up with excuses as to why we have the right to do so, but they always seem a bit hollow. There is no way to justify what we are doing, and there is no way that we can continue as we do and still hope to have a prosperous future. The only thing we can do to stop our species from continuing this march of mayhem is to stop throwing gasoline on the fire by adding more people. 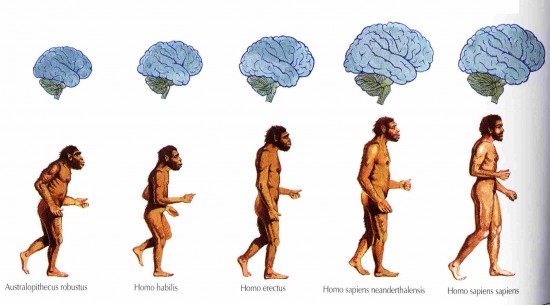 Homo sapiens have existed for at least 195,000 years, but never have we ever been as many as today. Ever since the industrial revolution in the 18th century the human population has grown at an explosive rate. We have gone from 2.5 billion people in the 1950’s to 7.2 billion today, and we are estimated to hit 9 billion in 25 years. The increase is not caused by more births, but instead by less people dying. 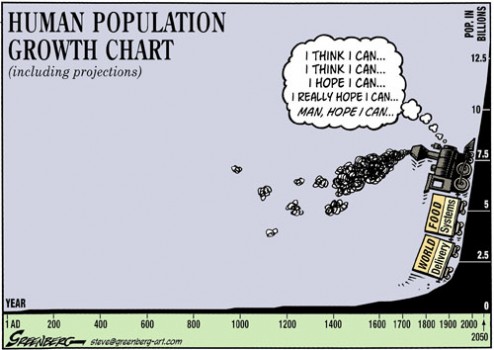 Even though the birth rate has gone down in recent years, we are still increasing in numbers. The industrialization made the production of consumer goods more efficient, medicine has evolved such as the discovery of penicillin in 1928. The child mortality rate in 1960 was at 181 per 1,000 births, and it has dropped to 47.8 per 1,000 births in 2012, in some countries such as Norway it is even as low as 2.8 per 1,000.

So why should we stop existing? Let’s take a look at the Easter Island real quick.

There are two theories about the Easter Island’s destruction.

Either way, mankind was responsible for the destruction of an ecosystem that could possibly have prospered without its intervention. We, Homo sapiens, have rarely, if ever, left anything in the same state as it was before we touched it. The sad part about the Easter Island is not that the population drastically declined because of food shortages, the sad part is that humans destroyed something pristine without giving anything back. The saddest part however is that we are doing it again, to the whole planet.

Will we leave quiet and respectfully, leaving the earth with a chance to recover, or will we drive ourselves to extinction whilst making sure that we destroy as much as possible of this planet before we go?

By adding more people, we increase the probability that the Earth will end up like the Easter Island. But there are more reasons than just ecological incentives to not have kids.

This may seem outrageous to many, but let me clear things up. The so-called “drive” to reproduce is in fact just a societal construction that we have learned to want from previous generations. We do not crave children; we crave sex and intimacy.

Offspring is in most cases not even the goal of intercourse between two people, but more of an occasional consequence. If the urge to have a child were so strong with some people, the less selfish choice would be to adopt a child that has no other options in life. The choice to carry a child for nine months because we want to experience the pregnancy is selfish, since it removes the chances of another child that has already been born from having a shot at some happiness in life. The nine months are purely for our own gain; since the child growing in the womb is not conscious enough to cherish the time it spends in there. Besides, it is counter-intuitive. Why put our bodies through something that is strenuous and possibly even dangerous when it isn’t necessary? 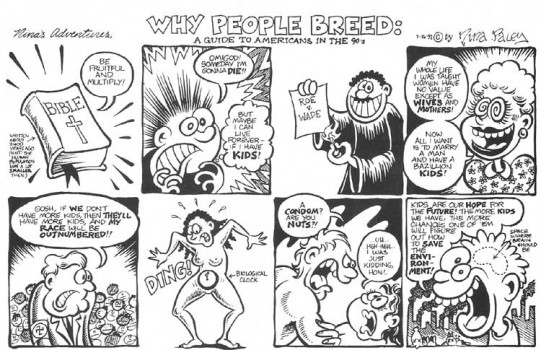 The second reason why it is selfish to bring a child into this world is that we willfully hurt other people for our own gain. Suffering in life is inevitable, and by giving birth to a child, we give it a life that will contain a lot of suffering.

We speak of the right to the pursuit of happiness, but never of the responsibility to avoid causing suffering when it comes to childbirth. You cannot remove life from someone who has never existed, so then why do we bring people to this life when we know that they will experience pain?

Continued reproduction will harm our planet with every new child

The average annual carbon emission per capita is four tons of carbon dioxide, with Americans 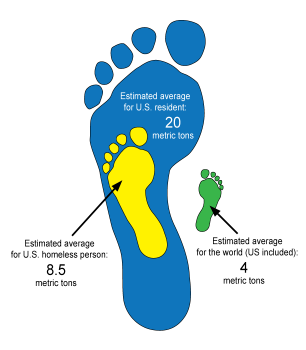 averaging at 20 tons per year. These emissions, together with other green house gases, contribute to the global warming effect that is disturbing global balances such as ocean levels and temperature averages.

After the industrial revolution the amount of carbon dioxide in the atmosphere has increased with 40%. For every new person, the strain on our environment increases, and we are damaging our ecosystem in a way that we are creating a mass extinction of species. 30,000 species are extinct every year. With three species per hour it is estimated to be 1,000 times faster than species naturally go extinct, which makes it equivalent to the five mass extinctions before this, one of which killed off the dinosaurs.

The worst villain is the 20th century invention plastic, which was first created as Bakelite in 1907 and contains no naturally occurring molecules. The annual global consumption of plastic is a staggering 26 tons per person, of which most is not recycled.

Of the 200 billion tons plastic produced each year, 10% ends up in the oceans helping create one of the worlds largest landfills; the Pacific Garbage Patch being double the size of Texas. Our lifestyle depends on taking advantage of as much as possible without thinking about the consequences.

Some claim we’ll be able to turn everything around and fix things, but haven’t we already had our chances?We are consuming more oil than ever, even though we know that it is a fossil fuel that is severely affecting our atmosphere and that it is an non-renewable resource. The price of oil has gone from 10 dollars per barrel in 1998 to 135 dollars per barrel due to more expensive and polluting extraction methods such as fracking, yet still we rely on it for energy.

We are consuming more meat than the earth’s resources can sustain with Americans averaging at 124.5 kilos of meat annually, yet most people will not consider becoming vegetarians. We have shown as a species that we are not willing to change our way of life, since we have become too comfortable in it.

The last solution then is to stop reproducing. Yes, it will leave us with an elderly generation with no one to care for us yes, but isn’t that better than having countless of other generations suffer because of our negligence and selfishness?

We should let the planet breathe and recover from the damage the smartest but dumbest parasites have done to it. We won’t be hurting anyone, just preventing more people from being hurt, and isn’t that the right thing to do?