Marius Salzmann is a German AUSB alumni that switched from one former British colony to another upon graduation — and found immediate success. 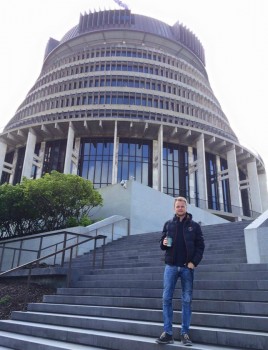 Salzmann in front of New Zealand’s Parliament in the capital of Wellington.

“Can you hear me?” he asks while untangling his headphones and adjusting the computer camera.

Lack of reliable wifi connection at coffee shops is a universal problem.

For Marius Salzmann, it has been almost been three months since he graduated Antioch University-Santa Barbara, packed his three bags, and jumped on a one-way flight to Auckland, New Zealand.

Scenic California beaches have been exchanged to fifty-story buildings reaching for the sky; a European-inspired dinner menu has replaced the not-so-well-done hamburgers; and words like organization and color are auto corrected to organisation and colour.

“Haha yes, I am systematically replacing my vocabulary with new words. You barely hear awesome, great, and buddy, typical American words. It is brilliant, fantastic, and mate,” Salzmann states while laughing. “A word that is also found in many sentences is the word keen. If someone asks if you are down to watch a movie or do something over the weekend, you are not interested, you are keen.”

Originally from southern Germany, just a stone’s throw away from the Swiss border, Marius came to the United States in the fall of 2011.

“After living in Europe for 20 years, I tried to escape the continent for new opportunities and better weather. I wanted to live in an English-speaking country and live this “American Dream” that I saw on television all my life. I did a day trip on a rainy weekend to Santa Barbara, where I discovered SBCC and its great bridging program with other schools.”

After three years at SBCC, why did you choose to continue your educational career at Antioch?
“I need water, the beach, the sun, and palm trees, so moving anywhere different was no option for me,” Salzmann says and explains why Antioch was a great match. “UCSB disqualified because they did not offer my major, only Economics or Accounting. Antioch gave me the option to transfer general education classes from high school as well as my business classes from SBCC, making me able to finish with a Bachelor Degree in one year.”

He never came to regret this decision. Spending four years in Santa Barbara is a luxury few students can brag about, but with a couple of months left of his studies Marius started to glance towards another former British colony: New Zealand.

“I would have loved to stay in the United States, but the risk of having to leave the U.S. after one year of OPT when I just got started with a professional career was not an option for me,” he says.

“After having visited New Zealand plenty of times, I fell in love with its people, nature, and landscape. I found a job that is needed in New Zealand that gives me the opportunity to apply for permanent residency also giving me the right to live and work in Australia permanently. New Zealand is a mixture between Europe and America that made the goodbye of the United States easier for me.”

Without getting too nostalgic, what do you miss most about Santa Barbara?
“I miss my Santa Barbarian friends, the Awesome Almond from SB Roasting Company, and the great Mexican food on State Street as well as crazy nights out in EOS, Blind Tiger, or Joe’s Café.”

“Antioch has a great advantage over other universities with small classrooms and project-based evaluations.”

After arriving in Auckland in mid-September, Marius was on the job prowl for five weeks before finding a good fit. Since early November his business card proudly states Recruitment Consultant. Cobalt Recruitment, the company Salzmann works for, specializes in recruitment in the areas of Real Estate, Construction, and Finance and have offices worldwide, including Abu Dhabi, Berlin, and Singapore. 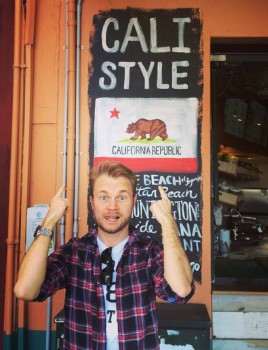 Marius has not lost the California vibe completely; Cali style is everywhere.

“I am involved in entire process from finding candidates, screening, interviewing and placing them in the end,” Salzmann says. “Our primary goal is to make a successful placement with one of our clients.”

Antioch University has a great emphasis on applicable skills and these traits have come in handy while starting up at his new job, especially since he has been able to adapt quickly through autonomous work.

“Antioch has a great advantage over other universities with small classrooms and project-based evaluations. A heavy focus on long-term learning where the student actively researches about a variety of different issues and tries to solve the problem themselves, rather than the instructor providing all the information provides more information, knowledge, and skills sets to future employers .”

The company is already impressed by his work ethics and have agreed to help him to claim permanent residency (equivalent to Green Card) where the process has already started. It certainly looks like Mr. Salzmann is in New Zealand to stay.