Trending Now
You are at:Home»Literary»The Birth of a Crystal Heart

I was a week late. I decided to take a pregnancy test at my boyfriend’s house. It was positive.

How will I tell my parents? How will my boyfriend react?

I told my boyfriend first and his smile was like a sudden ray of sunshine. I made an appointment at Planned Parenthood to confirm my pregnancy. My boyfriend came with me, but shocked me when we were asked this question:

“Do you want to keep the baby, or terminate the pregnancy?”

I saw a side of him I did not know—I could not believe what I was hearing. I took a deep breath and told the nurse that I planned on keeping my baby. I did not want to argue with my boyfriend, so I buried his words deep in my mind.

What could I do but face the consequences of my actions? I knew I wanted this baby more than anything in the world. It meant I could see the world through my child’s eyes. My child would be a constant reminder that God sent me a miracle. My parents were Catholics and abortion goes against our religion. A life is a life.

When I got home, I told my friends that I was pregnant and they were in disbelief.

“I thought you were taking care of yourself, ” said Gabriella

I thought I was too. Tears rolled like a big ocean wave over me.

“Oh my god,” said Treicy. “How will you tell your parents?”

I was taking care of myself, but keeping my pregnancy a secret. I kept my pregnancy a secret because of my father’s wrath. My father was a religious man and he never wanted his daughter to go through what his mother went through—she was a single mother and had to work so much that she ended up leaving my father behind to be raised by his grandmother. Growing up, my father warned my sister and I that if we got pregnant he would push us down the stairs. He would never do that, I knew, but he would say it to make us afraid. To keep us from becoming single parents. And I was afraid. My father was a strict man. Even if he didn’t push me down the stairs, I was worried that he would kick me out of the house.

One night at my boyfriend’s house, we decided to tell his parents that I was pregnant. His mother’s reaction was not what I had expected. She did not show any type of emotion. Not happiness, not disappointment, not fear or anger. It was hard to imagine how I would tell my parents, or how they would react.

While I was at his house, my friends messaged to ask how I was doing. They asked how far along I was, and if I was feeling nauseous yet. I replied, totally forgetting that my iPod was linked to my phone—so as I was texting my friends, the entire conversation was traveling to my iPod at home, where anybody could read them.

My sister, brother, and his girlfriend read my messages. They confronted me as soon as I got home. My sister threatened to tell our parents, and I asked her not to say anything. “I will tell them once I am ready.”

My sister and I have never seen eye to eye. Mainly because since we were little girls, my mother would always compare her to me. I felt like my sister hated me. I was the perfect daughter for so long, while my sister got into trouble at school. My parents never had any complaints about me.

Even though she promised not to, my sister ended up revealing my pregnancy to my mother after an argument where my mother again compared her to me. I was not angry, I was just sad to see how far she was willing to go to prove a point that I am not perfect.

My mother said to me, “You’re pregnant? How?” I told her I didn’t know. We used protection but somehow the condom must have ripped.

I didn’t tell her what I had wondered about for weeks. I didn’t tell her that I wondered if he did it on purpose. My boyfriend had a daughter with his ex-partner, and he hadn’t been able to have any contact with her after they broke up. Was it on purpose? Did he want a child, one whose life he could be a part of?

Oblivious to my thoughts, my mother kept ranting about how I was a disappointment. She asked if my boyfriend was going to be responsible, and step up as a dad. I said yes, of course. I really believed it at the time.

Later that night, my mother told my father. I pretended to be asleep. I was so scared of my father’s reaction. There was absolute silence when they were upstairs talking. Then I heard heavy footsteps clomping down the stairs. My father was crying, and my mother took him out for a walk so he could calm down. I could not help myself—just hearing my father crying, I began to cry too. My parents were so disappointed, I felt like I had committed some type of crime.

The next morning, I told my boyfriend that my parents knew. My boyfriend decided it would be best if we got married, and told me that he would come talk to my parents and ask for their blessing. I was excited, but on the day he planned to come and speak to my parents, he did not show up. It was the first time I asked myself, Will I be alone in this?

The next day I saw him in school and asked why he didn’t show up. I thought maybe he was scared too, or didn’t know how to face my father.

But he didn’t answer my question.

Instead, my boyfriend was rude when I asked him if he needed help speaking to my parents. He was distant and did not allow me to say anything else. I said that I would not put up with him mistreating me. He grabbed me by my arm and said, “We need to talk.” He took me outside and told me it was over. I felt my throat getting tighter.

In my mind I had a lot of questions. The biggest one was, Will you be there for our baby? But I couldn’t say a word.

I felt the ocean was swallowing me as tears began rolling down my face. My now ex-boyfriend walked back inside the computer lab and I went home crying.

When I got home, I told my mother everything. I could not believe he left me at two months pregnant. From that day on, I would cry every day—and my mother was amazing because she did not let me cry alone. She cried with me.

She couldn’t stand seeing me in so much pain. She said, “It is true: a mother will always endure her child’s pain.”

I did not want my baby to feel pain. I wanted him to be happy and not worry about anything. I wanted to take away any pain he might feel, make it my own.

But I didn’t know how I could do that when I hurt so much. I was not at my best. I was pale and had lost my color from crying a lot. Through my eyes, a deep ocean of sadness. I wasn’t hungry, but I forced myself to eat to keep my child alive. I wanted the earth to open underneath me and devour me. I had fallen deeply into depression. I would only live for my baby.

My ex contacted me in December and asked if he could go to my ultrasound and find out the baby’s gender. This made me wonder again about his presence in my baby’s life. How many times would he be in and out of our lives?

As the technician was applying cold gel to my stomach, she asked if we wanted the gender to be a surprise. “I want to know today,” I said, even though somewhere inside, I already knew. My ex was convinced from the moment I knew I was pregnant that it would be a girl. But I was certain that it was a boy.

A few minutes went by, the room was silent except for the hum of machines.

Suddenly, my sadness lifted. I felt overjoyed. The technician gave me a stack of ultrasound pictures. My ex wanted them too, but I said, “I can give you copies because I am keeping the originals.”

As we left the doctor’s office, he told me, “I want our son to have my last name.” I refused, and even while he insisted, I knew I wasn’t going to change my mind.

That night, as I lay in bed looking at the ultrasound photos, I made my son a promise. I promised I’d give him the world. I promised he would never need the extra person, a father who comes and goes, because I loved him times two.

Being a single parent is hard, but it’s also rewarding. The only thing I would change if I could go back would be leaving the father of my child. When I was at Planned Parenthood I should have walked out and left him behind. He clearly wasn’t ready to be a father. But he made me ready to be a mother. A mother who endures, and loves through even the worst hurt.

“Mommy thank you, you saved me.”

As I hear these words, my son doesn’t know, but he lifts me up. He sees right through me.

And he doesn’t know it, but he saved me.

He is the best son life could have rewarded me with.

Seeing my son smile, I smile. Hearing him laugh, I laugh. Touching his tiny hand, warms mine. 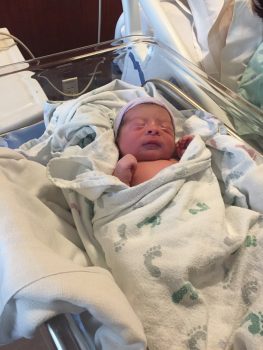 Yesenia Mundo will be graduating this fall with her Bachelor in Liberal Arts with a concentration in Childhood Development & Education from Antioch University in Santa Barbara, California. This is her second quarter taking Odyssey. Yesenia enjoys taking online classes because it gives her the opportunity to spend more time with her son, Kayden.