Trending Now
You are at:Home»Literary»The Oracle

The Oracle saw all. A priestess of sight, she forsake her own womanhood in service to the gods and goddesses she became a vessel of divination. Isolated on her mountain she had the knowledge of all beings in all iterations of time, past present and future. A cleft heaved itself into the flank of Mount Parnassus, and from its depths billowed the hot Sulphur breath of Gaea, mother earth. The steam rose and carried the secrets of existence upon the crystalline matrix that pressed itself into the dry Greek air. The Oracle of Delphi, seated in her sacred temple, swallowed the steam and spoke prophecy.

Thousands upon thousands of years ago when the night sky was black and the stars were a trillion bright moons glittering unaffected by the malignant glow of civilization, she saw us. She saw our modern world and watched us through her ancient eyes. When Cicero and Socrates summited the steep slopes of her sacred mountain she could see the world their sons and daughters would inherit.  From her mountain top seat in ancient Greece she peered at our curious world.

In her celestial communion with the goddess, she watched us clutching and frantically touching brightly colored objects, smooth and flat like shards of pottery that were never a part of a whole.  She watched us staring into their glossy abyss for hours on end. She thought we had created some kind of new companion. One that we spoke to and confided in and touched affectionately all day; and late into night it illuminated our blank faces and shapeless bodies buried under blankets.

She watched our eyes crinkle with laughter and our lips upturn in a smile, as we touched and petted this colorful little idol. What had we done? Her words were lost in our world, her prophetic Sulphuric fumes could only show her, not translate what she saw. She was grasping to understand what we had become, she her ancient words gathered together in her mind and she thought the sons of men had forsaken the gods and trapped them inside the pockets, they sliced the sun into a billion little pieces and it shone through these clay idols at unnatural hours.

She listened as we spoke to this pocket-god asking it questions “how to lose weight”, “how to make money”, “how to lose weight fast”. We weren’t talking to each other, there were no elders, no wise ones to gives us guidance.  She watched as the trapped idol took the shape of our friends and loved ones, as we petted and tapped on their faces. We could see where they were, what they were doing, who they were with, we could even see their past. We had become small oracles without wisdom we lived alone, smiled alone, laughed alone, staring at bright shards of glass, it’s very own sun, the center of billions of little galaxies on one earth. We were scared and anxious and forgetful. We had forgotten what we were, forgotten to look up at the sky and see the stars, forgotten to learn who we are before we die, forgotten to love what we are before we die.

She saw billions of small oracles with the answers to everything who knew nothing. Billions of anxious sons and daughters staring at the face of their friends and family all day not really loving, not really caring, just water skimmers gliding over a glossy pond reflecting image upon image. She heard billions of voices calling out to this idol, asking for help, endlessly searching and scrolling and tapping looking for guidance but no voice ever answered.

The cliff roses  exhaled the sun they had been drinking all day into the cool night air over Mount Parnassus. The world was different. There was mystery in the tall mountains and the clouds above cosseted the virgin land like goose down. Thunder was still Zeus roaring from the heavens. The veil between realms was thin and transparent and man was still new. Living for eternal glory, for his name to be sung in ballads, to know his true nature and to go on and live among the gods.  When the noxious fumes released her from their grip she gasped. Reeling from what she saw, knowing the future was fixed and nothing she could do ever undo what is meant to unfold in the unending knot of time. She wanted to hold us, she wanted to tell us. She wanted us not to forget. 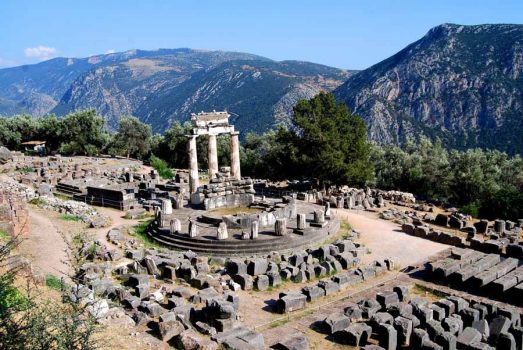 Two simple words. “Know Thyself.” She etched these words in the temple stone. Where it can still be visited today on the temple of mount Parnassus, a calling, a foretelling and a remembering. Know thyself.  She speaks from beyond the stone. She calls to us. To look, to know, to examine, to remember what we are, and what we are not.