While only about 2% of the U.S. population, or 5 million people, identify as having Native heritage, Natives have the lowest per-capita income and the country’s lowest level of education; they also get first prize for the shortest lifespan and the poorest housing. Where the national poverty rate is about 14%, the poverty rate of the Native population is nearly twice as high at 26%. Poverty, suicide rates and alcoholism remain epidemic among Natives, and these struggles take a toll on the mental health of this community. Historically, Native Americans have suffered through so much loss, and they continue to suffer through negative stereotypes and microaggressions as they hold the title of America’s most oppressed minority. Natives are typically left out of the conversation when we talk about minorities, many assuming that they are living high and large on casino money, but this is most definitely not the case. Natives have demonstrated much resilience in light of such a traumatic history, however, these events have definitely taken a toll on individual mental health, hence the need for mental health services that address the trauma suffered by the Native community.

The population of Native Americans in North America decreased by 95% from the time Columbus came to America in 1492 and the establishment of the United States in 1776. For Natives, colonization brought genocide, theft of resources and land, loss of language, and systematic oppression of the Native culture. For Natives, land, plants, and animals are considered sacred, valued highly, and incomparable to property, hence why this loss became a source of major grief. Many have even called it a Holocaust, comparing it to the Holocaust in Germany. The lack of acknowledgement of these deaths by the dominant culture has denied Native Americans the ability to mourn their losses, and thus, the historical view that Native Americans are stoic and savage has contributed to a dominant societal belief that Native people were and are incapable of having feelings, and therefore, incapable of grief. 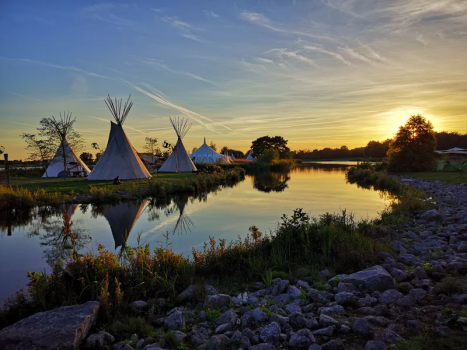 In 1883, federal law prohibited Native Americans from practicing traditional ceremonies which remained in effect until 1978, when the American Indian Religious Freedom Act was finally enacted. Not only did the government want to stop their cultural practices, but the U.S.’s new goal became “civilizing” Native Americans and assimilating them to the dominant White culture. While this may sound harmless, their means of doing so involved taking Native American children from their families at the age of 4 or 5 and prohibiting any contact for a minimum of 8 years, beating them if they even attempted to use their Native language. This is just one example of the oppression Natives experienced; this oppression by the dominant culture led to cultural mistrust, forming the foundation of historical trauma.

Historical trauma is trauma transferred intergenerationally through biological, psychological, environmental, and social means, resulting in a cross-generational cycle of trauma and grief stemming from a traumatic event in history. For Natives, this trauma is continuously perpetuated through modern day oppression, racism, and negative stereotypes that prevent the community from healing from the grief they have suffered through for generations. Researchers Whitbeck and colleagues (2004) developed the Historical Loss Scale and the Historical Loss Associated Symptoms Scale to better understand the prevalence of historical trauma on current day generations of Native adults. While these adults were generations removed from the historical traumas that had been inflicted on their Native ancestors, 34% still experienced daily thoughts about the loss of culture they had experienced, with many reporting feelings of anger in regards to these losses. They also found that 35% were distrustful of the intentions of the dominant White culture due to historical losses, hence proving that historical trauma and cultural mistrust still exists in the everyday lives of Natives.

Despite the extreme need for mental health services, those of Native heritage simply are not taking advantage of these services, and their mental health is being affected severely as a result. Some of the barriers to receiving care include poverty and lack of insurance, but also stigma, cultural mistrust, and an absence of culturally relevant services. Even if they do manage to have access to psychological resources, our mental health frameworks are catered to the dominant culture and can further perpetuate trauma rather than address it. One study found that over 50% of Native clients who went to mental health centers failed to return after the initial interview session; a rate that is about 20% higher than the dropout rate among other groups.

This number is especially disheartening considering how, statistically, Native people experience serious psychological distress 1.5 times more than the general population. Suicide rates are 70% higher among Native Americans and Alaska Natives than the general population, particularly young men and boys. Without mental health help, this distress shows up in other areas of life, as well, as statistics show that domestic violence, and physical and sexual assault are 3.5 times higher in Native communities compared to the national average; however, this number may be low, as many assaults are not reported. It’s also been noted that Native Americans use and abuse alcohol and other drugs at younger ages and at higher rates than all other ethnic groups.

So how can we get more Native people in mental health centers? First off, we need to make resources more available and affordable; this means advocating for Natives on a federal level to get more funding for clinics which serve Native Americans. From a psychology perspective, we need cultural trainings and education to ensure that all mental health practitioners are culturally sensitive and culturally competent. Our current models of assessing and treating trauma are limited in that they are unable to address the intergenerational transmission of trauma and the complexity of historical trauma and disenfranchised grief at multiple levels (i.e. individual, familial, and communal). We not only need to recruit more Native Americans, Alaska and Hawaii Natives, and global Indigenous peoples into the field of psychology as researchers, educators, practitioners and policy-makers, but also develop evidence-based, culturally relevant mental health constructs and paradigms that are community specific.

Natives believe that to be truly “well,” or whole, there must be a balance of mental, spiritual, and physical aspects of living.

From a Western medicine perspective healing is typically equated with curing, but from a Native perspective, to heal is to recover one’s wholeness or to reestablish harmony with nature; this journey to wholeness is often referred to as the Red Path. Natives believe that to be truly “well,” or whole, there must be a balance of mental, spiritual, and physical aspects of living. This balance is depicted in the traditional medicine wheel. The medicine wheel, with its four colors and quadrants serves as a reminder that all aspects of life are important and need to be balanced. Traditionally Native Americans visited a Medicine Man for assistance in the healing process. The Medicine Man would focus on the support system available to the person, and then suggest some type of ceremony to help restore balance to the person’s life.

The first ceremony a traditional healer may recommend is a powwow, a combination of the social and sacred coming together of Natives. A powwow includes a circular arena in which Native American drumming, singing, and dancing take place. While this may sound like one big party, this ceremony holds a special, spiritual significance for many Native Americans. The drum, for example, is considered especially sacred as its round form represents the entire world, while the rhythmic beat represents the heartbeat of the world, connecting Natives with the spirit of all of creation which surrounds them. 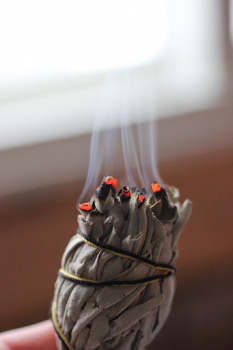 Smudging, is another traditional practice, specifically a means of purification. While smudging has now made its way into mainstream society and social media, its use by non-Natives poses a controversy of cultural appropriation as this practice has sacred, spiritual roots that the dominant culture is not connected to. Natives have long observed the plants within their environment, determining their benefits for healing and viewing herbs as a way to restore balance. Unlike western medicine, the benefits do not come solely from the herbal medicines, but rather, the spiritual connection the healer has with these plants. Smudging often involves the burning of cedar, sage, or sweetgrass. In smudging, cedar and sage plants are used to dispel negative energies, while sweetgrass attracts positive energies. Smudging can facilitate the healing process and it is even used in other sacred ceremonies such as inipi to prepare a person and/or space for a spiritual experience.

The inipi ceremony, also known as the sweat lodge ceremony, is another means of purification for Natives. This ceremony brings together the social aspects of the powwow, the purification aspects of herbs, and the spiritual benefits of song and prayer for a balancing and purifying experience. The lodge structure consists of a frame made from willow branches tied together in a dome shape, just large enough for a small number of adults to gather around a small pit; the frame of the lodge is covered in tarps and blankets. The pit is reserved for heated stones (a total of 28 stones are typically heated). Water and herbs such as sage, cedar, and sweetgrass are sprinkled onto the hot stones, releasing an intensely hot and aromatic steam that fills the lodge while the Natives sing and pray.

With the Native belief that healing occurs after one reconnects with the spirit, researchers set out to measure the healing effects of the inipi ceremony.

With the Native belief that healing occurs after one reconnects with the spirit, researchers set out to measure the healing effects of the inipi ceremony. This study aimed to measure changes in the well-being of sweat lodge ceremony participants. Researchers collected data before the ceremony began and asked participants to complete the same questionnaires after the post-sweat lodge feast. After participating in the sweat lodge ceremony in Alberta Canada, the researchers noted a change in spiritual and emotional well-being, as measured using the Heroic Myth Index (HMI) test. Items on this test were modified to fit the Native context of this study, encompassing mental, emotional, physical, and spiritual aspects of life. One specific change the researchers noticed was the scores on the “Orphan Scale” which contained items such as, “life is one heartache after another” and “important people in my life have let me down.” Scores on this scale decreased following the 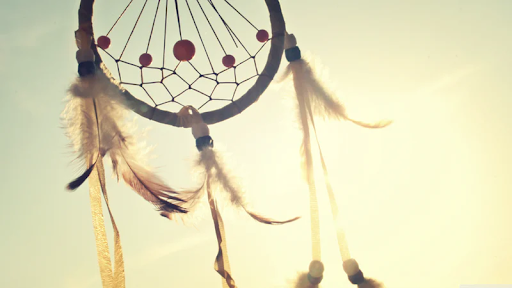 ceremony, suggesting that participants felt less hopeless and less let down than before the ceremony. It was significant that researchers found changes in spirituality because such changes are fundamental to healing in Native contexts. This study helps support the idea that traditional healing practices can be especially beneficial to the healing journey of those of Native heritage, proving these practices to be useful in conjunction with western therapy styles.

Culturally relevant psychology is extremely important for communities including Native Americans. Without practices that address the whole individual, cultural identity and all, Natives are forced into a cross-generational cycle of trauma and grief which negatively affect their mental and physical health, as well as, their social relationships with family and community. By incorporating traditional healing practices such as sweat lodge ceremonies or smudging, psychologists can create more culturally relevant treatment practices to address generational trauma without perpetuating oppression or dismissing Native identity and culture. In doing so, we can work to dismantle the cycles of trauma, and help eliminate the negative stereotypes which contribute to the ongoing oppression of Natives.

Ocampo, C. (2010). Is there such a thing as indigenous mental health? Implications for research, education, practice and policy-making in psychology. American Psychological Association. Retrieved from https://www.apa.org/pi/oema/resources/communique/2010/08/indigenous-mental-health