Trending Now
You are at:Home»Current News»Environmental»Podcast: Jeff Bridges and Beth Pratt Share Their Views on the Trump Administration’s Policy on Environment

At the Santa Barbara Film Festival, Famous Actor, Bridges, and Wildlife Activist, Pratt, Stopped to Talk to the Odyssey.

Just moments after Donald Trump’s inauguration, nearly all mentions of climate change were deleted from the White House website. In order to make America more business-friendly, the new US President wants to cut regulations for companies with an astonishing 75 percent. These two are among the factors that have made environmentalists severely worried about the future.

February 9th, at the Santa Barbara Film Festival, I had the opportunity to ask the California Director for the National Wildlife Federation, Beth Pratt, and star actor, Jeff Bridges, their views on the topic. Pratt, who’s currently in the limelight with the documentary “The Cat That Changed America,” was worried, but hoped for the best. 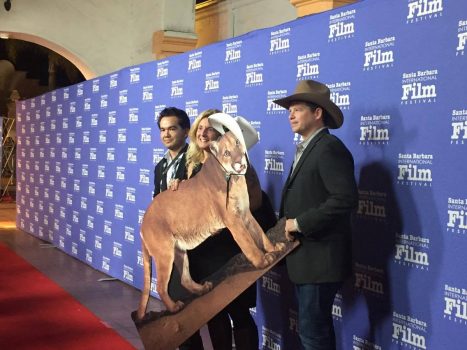 Beth Pratt (middle) with a poster of P22

In order to persuade climate change deniers, Pratt is convinced that wildlife can be used as a tool to win people over.

“I don’t know anyone, conservative or democrat, that doesn’t respond when they see a bald eagle or a fox or something. So I think trying to relate to people about what we both love and going from there. And I think wildlife is the perfect bridge, I really do,” she said.

Jeff Bridges has been quoted saying contradictory things about Donald Trump. In June 2016, Bridges declared that he was not supporting him, but in November the same year, he gave Trump his support. However, even if Bridges didn’t really answer my question on the Trump administration’s policy on environment, he made it clear that he cares for the environment.

“I’m really supporting  those people at Standing Rock, and I think we really got to be careful of protecting our environment. Native Americans, I think got the great idea of…to honor Mother Earth,” he stated.