Trending Now
You are at:Home»Current News»Unethical Personality Inventory in the Workplace

“Your personality type is: INFJ.”

I remember the first time I took an online personality test. I was in my teens and therefore immersed in an unforgiving cycle of continuously questioning my identity and purpose in life. Instead of turning to a few lengthy sessions of self-reflection or having any degree of faith in fate, I opted to take a variation of the Myers-Briggs Type Indicator (MBTI) online. After about 15 minutes, I had unlocked all of the answers to myself. I had a personal biography written for me, along with about 6.25% of the rest of the world, which detailed information regarding my characteristics, career paths, relationships, and so on. I was also quite pleased to find out I had the same personality type as Lady Gaga, Shirley Temple, and Mr. Bates from Downton Abbey. I quickly became fascinated with the world of personality tests, which then grew my interest in the field of psychology. Interestingly enough, this fittingly matched my suggested careers as an INFJ. Before long, I was insistent on sharing this transformational test with all of my friends and family, demanding they discover the secrets to their personalities too.

As thrilling as it was to explore my personality type, and the types of those around me, I later unearthed an exhaustive history of the MBTI’s illusory and deception. More than two million people take the MBTI every year, including 60-70 percent of prospective workers in the United States. Personality tests, such as the MBTI, are being used with the intention to aid employers in selecting the best candidate for an open position. However, these tests are discriminating against individuals who have a history of mental disorders. While in college, Kyle Behm applied for positions at seven different companies, all of which required him to take a personality test created by the company Kronos. He failed all of them. Intriguingly, Behm had noticed that the test had questions he recalled from a mental health assessment he had taken while being treated for bipolar disorder. Employers are getting away with using third-party personality tests to discriminate against applicants who have a mental disorder, which is against the Americans with Disabilities Act. 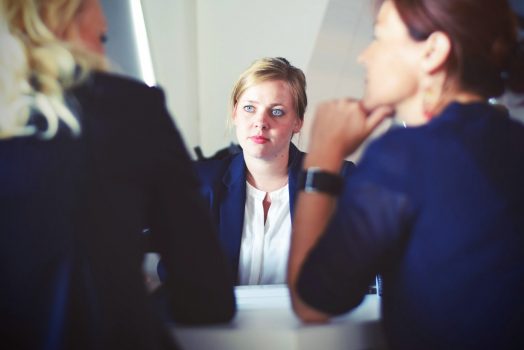 Photo by Tim Gouw on Unsplash

Many individuals are finding themselves being cast out of the job market due to the discrimination they are facing during the application process. Companies aren’t simply using personality tests to find out whether someone should be placed in sales or IT, they are filtering out individuals who have symptoms of mental disorders. To demonstrate, test takers are asked if they agree or disagree with these statements, “You often feel overwhelmed,” “Your mood can change very quickly,” or “You feel hopeful about your future.” Employers attempt to use the answers to questions like these in order to screen out applicants they see as possibly having a mental disorder.

Many of the third-party providers base their tests on the MBTI knowing fully well that the original creators, who lacked any formal training in psychology, didn’t want their test to be used for that exact purpose. The creators intended for the test to aid individuals in finding a career, not act as a blockade. There isn’t much information available about Kathryn Briggs and Isabel Briggs – Myers, the creators of the MBTI. However, Isabel Briggs – Myers was also known for being an award-winning mystery novelist. One of her novels titled, Give Me Death contains evidently racist themes, such as a southern family all dying of suicide after being led to believe “there is in [our]veins a strain of Negro blood.”  This should evidently be a source of concern since tests often reflect the biases of those who create them.

As many as 75% of test takers receive a different personality type when tested again.

The MBTI simply isn’t reliable. If you retake the MBTI after five weeks, there’s a 50% chance that you will receive a different personality type. Many of the questions can be answered differently based on your mood at that time. This is largely due to the test’s use of binary questions. Each personality type is characterized by four letters, each demonstrating a dominant trait. For each of these letters, there are two personality trait options. For example, for the first letter, you can either score as an “I” (introvert), or “E” (extrovert). Questions that ask whether you agree or disagree with a statement such as, “You would rather spend your Friday night out at a party than at home reading” are indicators for the test of whether you’re an introvert or an extrovert. The issue is, people can answer differently to this question, and other questions like it, based on their mood or a variety of additional changing factors in their life. It’s also important to note that Carl Jung, whose principles this test is supposedly based on, wrote, “There is no such thing as a pure extravert or introvert.” People aren’t 100% introverts or 100% extroverts. It’s much more realistic to view personality traits on a spectrum. Unsurprisingly, the test also lacks any clear validity, which is a direct result of its lack of grounding in research.

These tests impact applicants for jobs at a variety of different levels. Behm was being discriminated against when applying to a job at Kroger, but certain companies will use tests to identify individuals that have personality types that align with being a future CEO. If you don’t have one of those specific personality types, they will refrain from moving you up the corporate ladder. This is an issue that impacts both individuals who are applying for jobs and those who are responsible for hiring new employees.

Although the creators of the MBTI were well-intentioned, their test results should be seen through a careful and critical lens. As a teen, taking the MBTI to discover who I was, or was meant to be, seemed harmless. After looking into the ongoing misuse of the test and its problematic roots, this clearly isn’t the case. The workplace personality test business is growing, with its current worth equating to $2 billion. As the use of personality tests in the workplace continues to escalate, there is an increased need for more awareness regarding its unethical use and origins.

Photo by 卡晨 on Unsplash

Audrey Merta is working towards her BA in Psychology from Antioch of Santa Barbara with plans to graduate in September. Originally from Michigan, she had moved to the Santa Barbara area three years ago to continue her higher education. After receiving her BA, she hopes to pursue her MA in Clinical Psychology. When she’s not occupied with school or work, she enjoys being with friends and family, baking, or spending time in nature.