A Mexican gangster turned philosophy professor is something you don’t see every day.

But that’s Manny Raya, 34, who strives to make his story a less significant one by reaching out to members of his community through grassroots movements and his teachings.

“Nobody in my family or immediate circle went to college or graduated high school so this is all brand new to me,” said Raya. “Am I insecure? Absolutely. But what I make sure to do is talk to people who have been there before.”

Raya is a social justice and philosophy professor at Antioch University and Santa Barbara City College (SBCC). He graduated from UC Santa Barbara in 2006 and holds an M.A in philosophy from San Francisco State University (SFSU). He is the co-founder of ‘Turf 2 Surf,’ a program that taught surfing to gang members at rescue for seven years. Now, he strives to diminish the wealth gaps in the Santa Barbara community.

“It starts at home,” he said. “[Santa Barbara] is a place that gets looked at as a kind of paradise, and people fail to recognize that there’s a huge wealth disparity here.”

But Raya wasn’t always cut out for the role as a university professor and up-and-coming social justice leader. He grew up in a poor neighborhood in a single-mom household, and going in and out of jail for most of his teenage years, he aspired to be the best gang member possible.

“That’s how I identified,” he said. “That was happiness to me until I saw something else.” 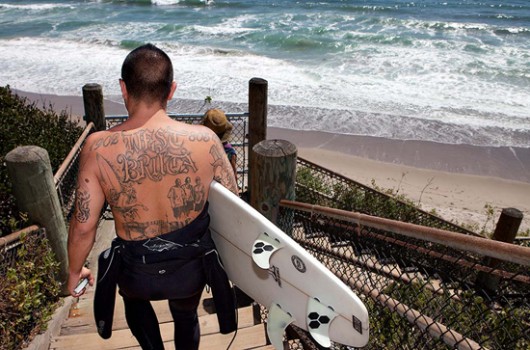 It wasn’t until Raya’s mom found out she had cervical cancer that he knew he had to abandon his gangster lifestyle and focus on helping his family.

But Raya’s mom objected by telling him an ambulance is too expensive and asked him to order a cab instead.

“Even as she’s on her deathbed, she’s still thinking about us,” he said in awe.

At the same time, Raya was taking philosophy at SBCC and began to recognize that as a gang member, he was part of a consumerist capitalist system. A system he didn’t choose himself, and a system he didn’t particularly approve of.

“Philosophy really messed with my head,” he said. “It sparked something that made me question who I am and… what I’m doing here.”

So Raya went to grad school and was nominated to be a student professor right when he had decided to drop out because of a heavy workload and a full-time job he needed to stay afloat.

But Raya delivered, was nominated to supervise other student professors and ultimately fell in love with teaching.

His style is controversial, however. He said his mentor at SFSU told him his methodology usually fails because students see him more as a friend than an authority figure. But Raya makes it work.

“When I was nominated to teach, I was so scared that a student would ask me a question I didn’t know the answer to,” he explained. “It’s that insecurity that’s been the driving force to lead me to where I am today.”

In the same way Raya’s teaching style is different from the typical professor with hipster glasses and a brown leather-briefcase we all seem to know too well, so are his clothes.

“When school starts I tend to dress up with a buttoned up shirt and then I become more and more relaxed,” he said. “Students at [SBCC] will see me walking with a tank top, they’ll see my tattoos and they’ll be like, ‘holy crap, I would’ve never expected that.’”

And it’s all for a reason.

“So often we put people on a pedestal because they have a certain title… and we fail to identify that they’re people with faults just like us,” he said. “It allows [students]to see that if I can do it, they can, too.”

When Raya isn’t teaching, he spends his time surfing and taking care of his mom, and for him, that’s all he could ever ask for.

“I don’t care about any kinds of wealth or status indicators, I just want to help people,” he said. “I grew up poor so I’ve never had anything like that, but I don’t want it either. That’s not what happiness is to me.”

Originally from a small town in southern Sweden, Linda Sturesson has been in the U.S for four years and studies Media & Communication at Antioch University in Santa Barbara, CA. She currently interns at KCRW under NPR. Linda has interned for news organizations such as local Santa Barbara newspaper Noozhawk, KEYT News Channel 3, and DiyaTV in San Jose.