Trending Now
You are at:Home»Features»Opinion»A Car Nation without Driving Skills

Despite a rather high car dependency, it is ironic how badly Americans maneuver their vehicles. But without stricter requirements there is no reason to expect improvement in the near future.

Earlier this year, on a sunny June afternoon, I was cruising in Monterey with a couple of friends. We approached a red traffic light and had to stop. After waiting at the intersection for about 30 seconds, the driver got ready to go. Before the light turned green, a car rammed into our rear end. It was an older man in the car behind and he regretfully defended himself and said “I did not remember which pedal was the brake” while he shrugged his shoulders — without a doubt the lamest “excuse” I have ever heard.

This is not a rare occurrence.

During the course of the quarter, two students in our Online Odyssey class have been hit by cars while biking in broad daylight, one of whom described her experience in a previous article. The incidents have sparked a discussion whether or not Americans are bad drivers. No fire without smoke, as a known proverb puts it, and the sloppy driving behavior can largely be attributed poor legislation and lack of requirements.

A monthly Netflix subscription is money that most of us can spare. By canceling your subscription for three months, you have the financial means to get a driver’s license — at least in the United States. The cost of a licence differs across the country: in California, the application fee is as little as $33, but in some states — like Mississippi — you can obtain a license for $6. 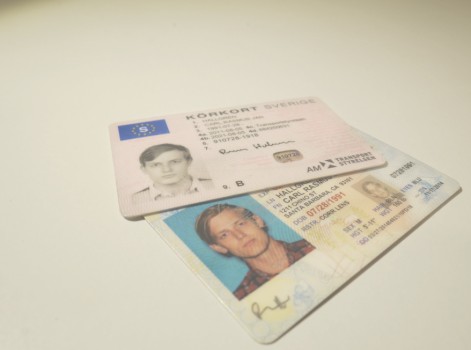 Two plastic cards with the same purpose and same size, but a $637 difference in cost.

In Sweden, where I come from, the minimum cost of a driver’s license is $670 and includes all required modules: driver’s test, theory test, drug seminar, slippery road test, miscellaneous fees, and issuance process. However, this does not include driving or theory lessons; the average cost for a driver’s license in Sweden amounts to a staggering $1,800 . The total cost varies in the rest Europe but is well above the American average in countries like France ($1,810), Germany ($2,000), and Spain ($931).

Not only is it more expensive in Europe than in the U.S., but it is also an extremely comprehensive challenge both on a mental and physical level. A European driver’s license is seen as a long-term investment rather than a happy meal you can grab after waiting ten minutes in line. In Sweden, the examiner has 45 minutes to assess your practical abilities during the driving test. Once you have passed both the practical and theoretical test, you have a provisional driver’s license for 24 months years; any misdemeanor and you will lose the license and would have to go back to traffic school. 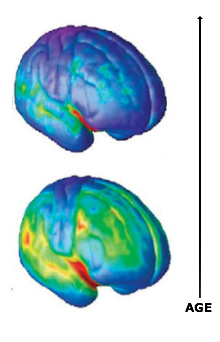 There is a difference between the brain of an early teen (bottom) and a 22-year-old (top) where the darker colors represent white matter.

One extremely hot topic in terms of traffic safety has been minimum driving age. Allowing teenagers to drive at the age of 16, no other Western country have a lower age than the United States. Proponents have long voiced their concerns looking to increase the minimum driving age.

Why? It all relates to brain development, or lack thereof.

The frontal lobe is the section of the brain responsible for most driving skills, including the body’s motor skills, emotional maturity, and risks aversion. Lack of white matter in the frontal lobe, which is not fully developed until the age between 25 and 30, is one explanation to why teens are prone to speed, disobey traffic signs, and lose control of their vehicles. Insurance Institute for Highway Safety conducted extensive research and suggests that teenagers are four times as likely as older drivers to be involved in a crash.

In 2013, 117 of 1,000 teenage drivers were involved in police-reported motor vehicle crashes. Sweden, on the other hand, is the world-leading country when it comes to traffic safety; in 2013, only 260 people died in car accidents in Sweden compared to roughly 30,000 in America. That means that three times as many Americans than Swedes die in traffic accidents if the number is adjusted to per capita.

Who does not like to enjoy a cold brewski or a glass of Merlot while dining out? The problem is to get home from the restaurants.

In the United States, a person is allowed to have a blood alcohol content (BAC) of 0.08%, which equals three and a half drinks (12oz beer, 5oz wine, or 1.5oz distilled spirit) for an average-built man. I have had friends driving 10 miles from downtown to Goleta after pounding four beers at a bar while watching a late night hockey game. Luckily, they have managed to avoid accidents and police checks on their way back.

The amount of beer one can legally drink before driving. In Czech Republic you are not allowed to drink at all while Netherlands (2) and Sweden (1) are a bit more lenient. In the U.S. it is possible to have 3.5 beers and legally drive.

However, the acceptable limit of BAC in the U.S. is substantially higher compared to the rest of the world. Most European countries have limits ranging from 0.02% to 0.05%; the more alcohol your blood contains, the stricter the punishment.

Although the numbers of incidents have been reduced in recent years, over 1.2 millions drivers were still arrested in 2011 while driving under the influence of either alcohol or narcotics, according to a research study conducted by Mothers Against Drunk Driving (MADD).

Going back to the initial questions: are Americans bad drivers? Generally speaking, my answer is yes. However, the burden cannot only be put on the individual. Because without implementing stricter regulations on how to obtain a driver’s license or the condition one is allowed to drive in, nothing will change and America will remain a car nation without driving skills.