Ranging from small to large vineyards, wineries across California are now struggling to keep their consumers safe from the “agrochemical” giant, Monsanto. In a recent analysis prompted by Moms Across America a group advocating for the right to health, 100% of the California wines tested, tested positive for the carcinogen Glyphosate. Even the Organic wine! 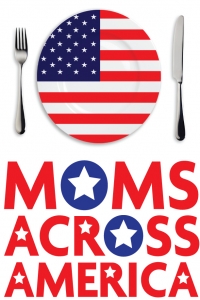 Moms Across America advocating for the right to health, prompted study to test for Glyphosate in Napa, Sonoma and Mendocino counties.

People tend to think of wine as “just grapes”, or “fermented grapes” at most, but there are a lot more ingredients then you might think that go into making the beverage we all enjoy so much. Salts, sugars, yeast and acids are components added to aid the fermentation process. The problem however lies in where these ingredients come from and what types of chemicals are added.

On March 26th 2016 the results were in that all wines from Northern Napa, Sonoma and Mendocino regions, tested in the Microbe Inotech Lab of St. Louis Missouri were positive for the active roundup chemical Glyphosate. The highest amount detected in one of the wines was 28.4 ppb (parts per billion) higher than a 2013 Cabernet Sauvignon from a standard commercial, chemically farmed vineyard at 18.74 ppb. In addition the samples from organic vineyards had traces ranging from 0.659-0.913ppb of Glyphosate despite having never been directly sprayed by the herbicide.

So what is Glyphosate?

Glyphosate is the number one active ingredient that is found in Monsanto’s Roundup herbicide that is still the most widespread agricultural chemical used in history. Introduced in 1974, it has been estimated that a reported 1.8 million tons of this herbicide has been sprayed across U.S. fields and two-thirds of that amount can be accounted for in just the last 10 years. Vines that used live and produce for 100 years, are now only living 10-12 years as Glyphosate strips living organisms of their natural minerals and nutrients. 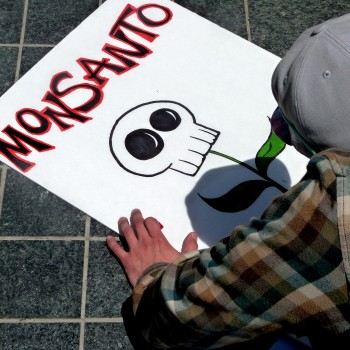 The carcinogen Glyphosate is the main ingredient in Monsanto’s herbicide, affecting the health of plants and people across America.

How is this affecting organic wine?

Seeping its way in, Glyphosate is now affecting the production of organic wine. While roundup is never sprayed directly onto the vines, it is often sprayed on the ground on either side absorbing through the roots that then travels to the leaves and grapes. Noting that this is never a process used on organic vineyards, the chemical is proven to be airborne, transferred through water sources, manure/fertilizer, and can remain in the soil for up to 20 years. This leads to the assumption that organic wines are being contaminated through new wineries decisions to convert conventional chemically farmed vineyards to biodynamic organic vineyards. At this point the value, brand and livelihood of these farmers are at extreme risk, not at their own fault but in the hands of the FDA and other conventional farmers supporting the use of this detrimental chemical.

What You Need to Know About GMOs:

Current regulations provided by the FDA do not require testing or labeling of chemicals in pesticides such as roundup. This has resulted in a heated debate and 700 pending lawsuits against Monsanto for the connection between a handful of deadly diseases and roundup detected in a variety of food and beverages.

“The breast cancer rates are a reported 10-20% higher than the national average in Mendocino, Napa and Sonoma counties.”

Despite Monsanto’s firm belief that Glyphosate poses absolutely no health risks to humans, the World Health Organization and increasing amounts of cancer rates suggest otherwise. In Mendocino, Napa and Sonoma Counties where many of the wine samples were derived from, the breast cancer rates are a reported 10-20% higher than the national average. Other possible risks include, Parkinson’s, birth defects, neurotoxicity in the brain and imbalances in sex hormones.

What prompted this study?

Das Reinheitsgebot or “purity-order” is Germany’s purity Law pertaining to the fact that Beer may only contain water, barley and hops, started in Bavaria, Germany in 1516. However a study conducted in early 2015 suggests recent flaws in the law as the Munich Environmental Institute released shocking results of a study that found glyphosate in 14 of the most sold beers in Germany. 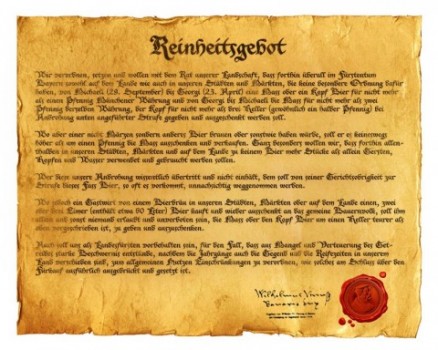 Following the troubling test results the German Brewers’ Association attempted to call the study “not credible”, but quickly receded that comment by saying that the low rates of contamination are impossible to prevent. The herbicide is virtually found everywhere in agriculture and again even if the barley wasn’t directly sprayed, it’s likely that it is growing in Glyphosate-drenched soil over the many years in use.

What Can You Do?

Buy local! Purchasing from local wineries and breweries not only helps support small family-owned businesses that contribute to the uniqueness of communities; but small facilities are also more likely to avoid using the harmful chemicals that are ruining our happy hour. Certified organic or not, in most cases these “micros” operate on 100 acres or less, produce beverages that are usually consumed locally limiting the unnecessary packaging and transportation effects and in general they provide more variety catered for individual tastes.