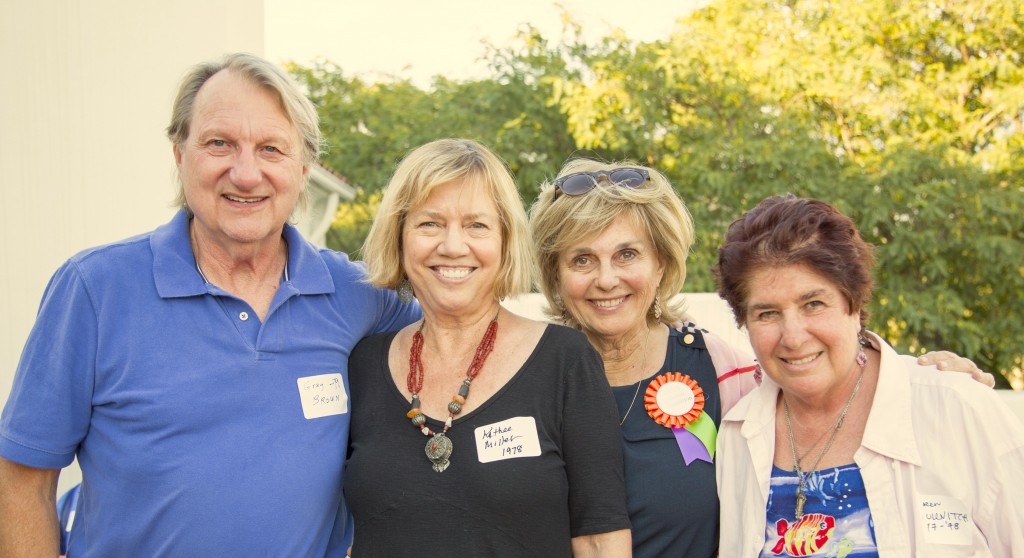 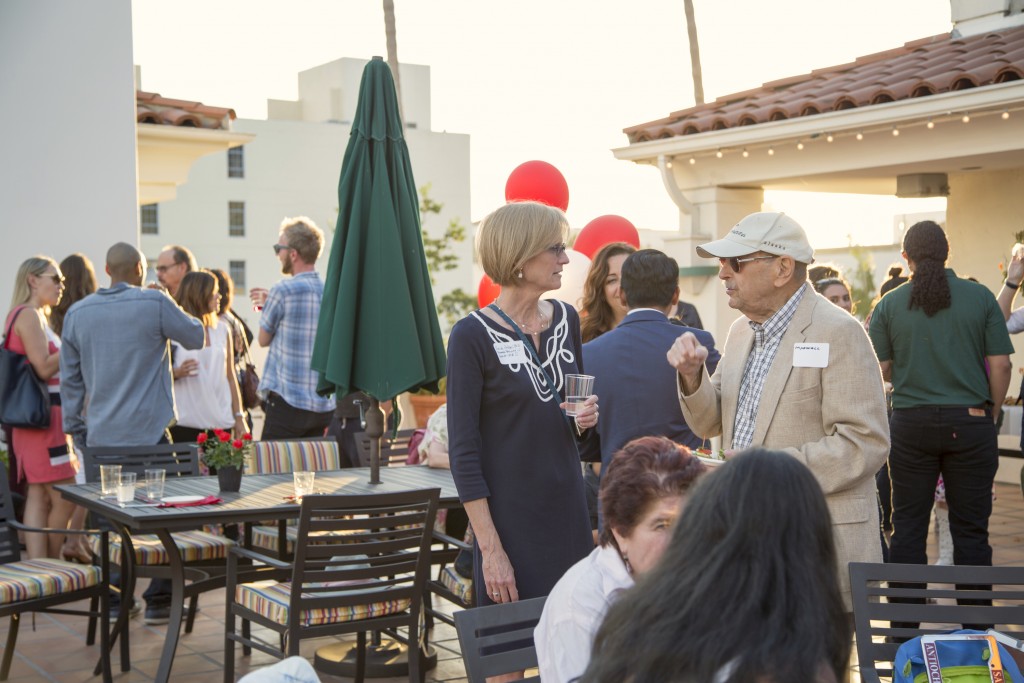 Students from the first class to attend Antioch University in Santa Barbara were welcomed home, recently, at The First Annual Alumni Homecoming Celebration. The event, sponsored by the still informal AUSB Alumni Association hosted over 150 Alumni, former faculty and staff, current AUSB students, teachers, friends, family, and members of the local Santa Barbara community. The September rooftop gathering featured festive columns of red and white balloons, an impressive display of hors d’-oeuvres on buffet, several alumni awards, and a speech by AUSB Founding Executive Director Lois Phillips. Along with these, was the warm exchange of many Alumni memories. 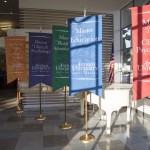 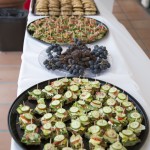 The evening heralded the birth of the Santa Barbara campus, in 1977, and it’s 40 year history of fostering student success and social change. Highlighted was the recent inception of a new Alumni Association structure, it’s plans to formalize, a newly created scholarship, alumni support programs, and this year’s upcoming Alumni Association events. On hand,too, was an abundance of camaraderie and inspiration, offered most notably, by stories, successes, courage, and gratitude from the ‘First Class’  men and woman, who shared with the crowd over an “open mic “.

“It was inspiring to hear from talented AUSB alumni about what they are doing to serve our community and about the successful businesses and non-profits they have founded.” – Abby Pasley 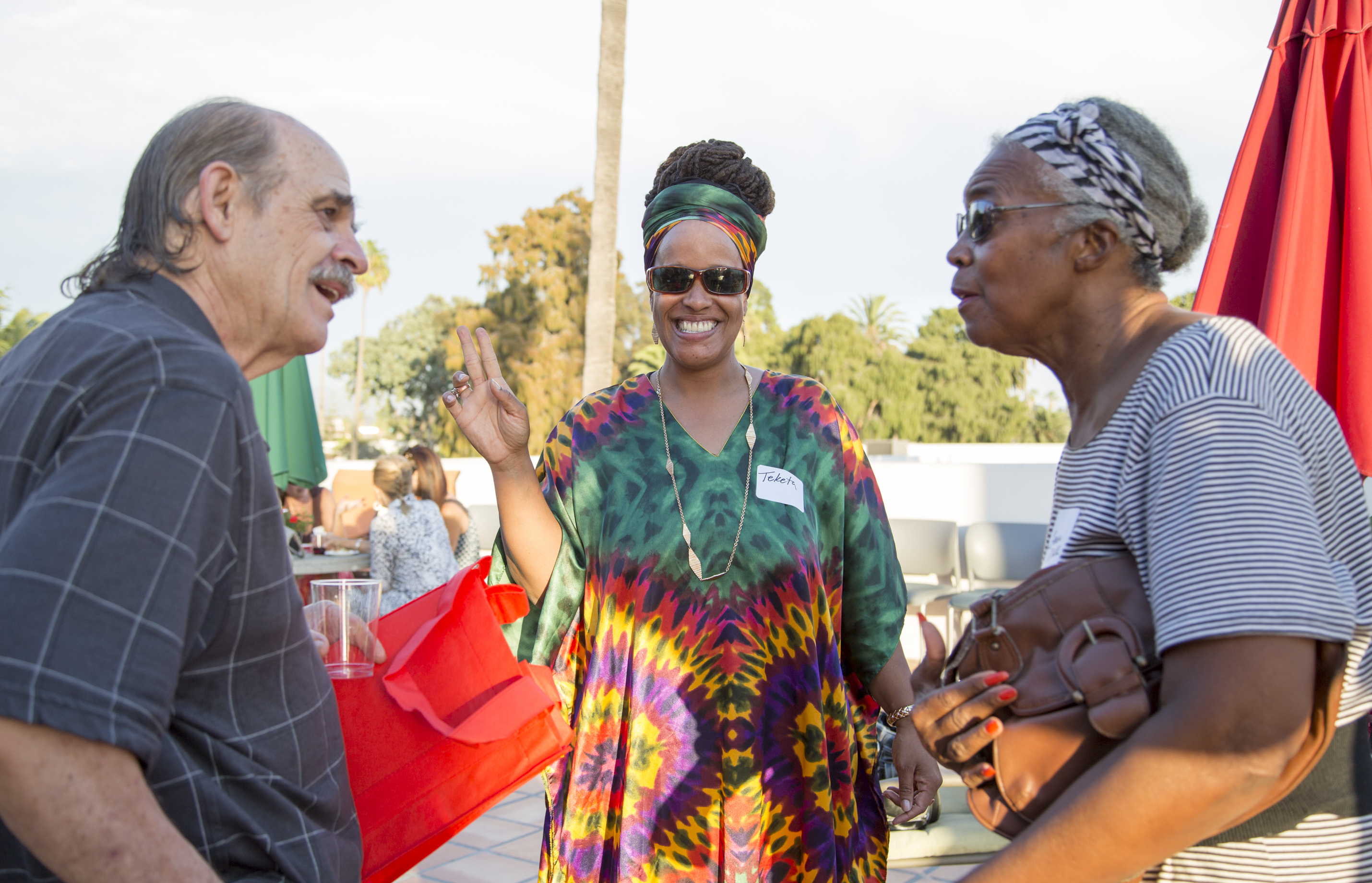 AUSB Alumni were “all smiles” as they reconnected with former classmates and friends.

“Returnees to campus showed genuine delight in reconnecting with one another,” Observed Barbara Greenleaf the Associate Vice-Chancellor and founder of the AUSB Alumni Association initiative, who organized the event. “The highlight for me”, Greenleaf revealed, “was meeting members of the ‘First Class,’ people who took a real leap of faith by enrolling in our brand-new campus in 1977.” 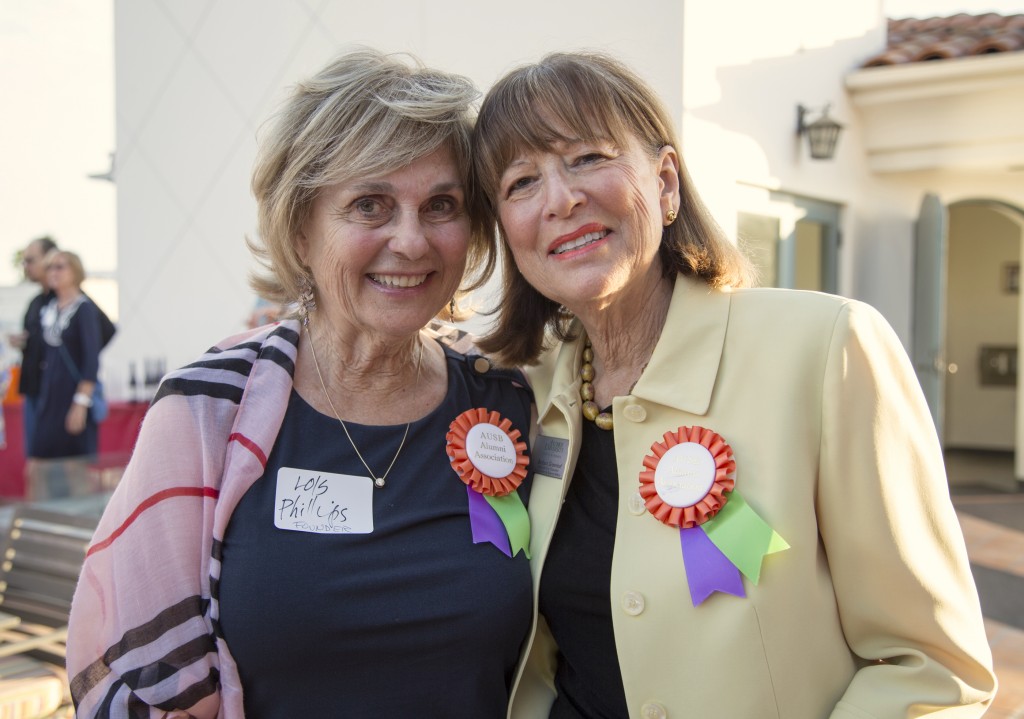 Lois Phillips, who is known at AUSB as the ” Mother of the University” for her foundational efforts and decade-plus of early leadership, described in her keynote address, those early “hectic years.” In the beginning, Phillips did everything from recruiting staff and writing curriculum, to teaching classes herself, trying to hold-together and grow a fledgling campus. Phillips was presented with a certificate of recognition for her contributions to the birth of AUSB, for her years of nurturing the campus, and for fostering a tradition of academic excellence. 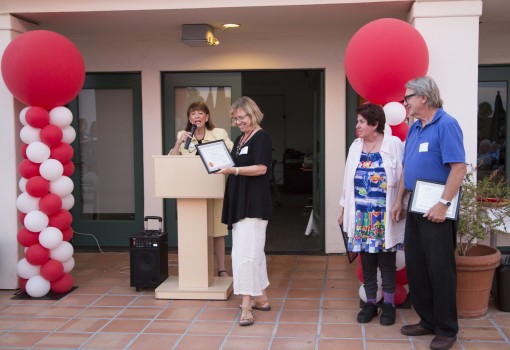 As Homecoming’s main event, ‘First Class’ Alumni, men and woman, were awarded for their courage and early involvement in the Antioch Santa Barbara Legacy. 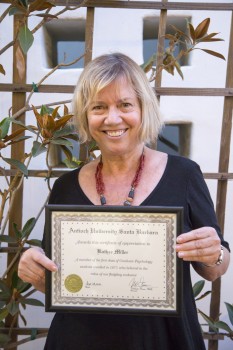 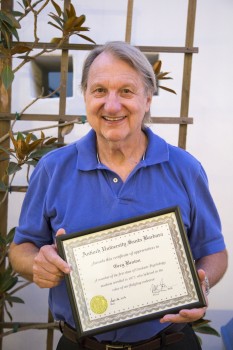 “Being so tiny, the initial cohorts were very close, and their warm feelings for one another were on full display at Homecoming.”        – Barbara Greenleaf.

“Being so tiny, the initial cohorts were very close, and their warm feelings for one another were on full display at Homecoming,” Greenleaf said of these alumni, who each received a framed certificate. Their broad smiles and obvious connectedness, seemed clear evidence of this closeness. 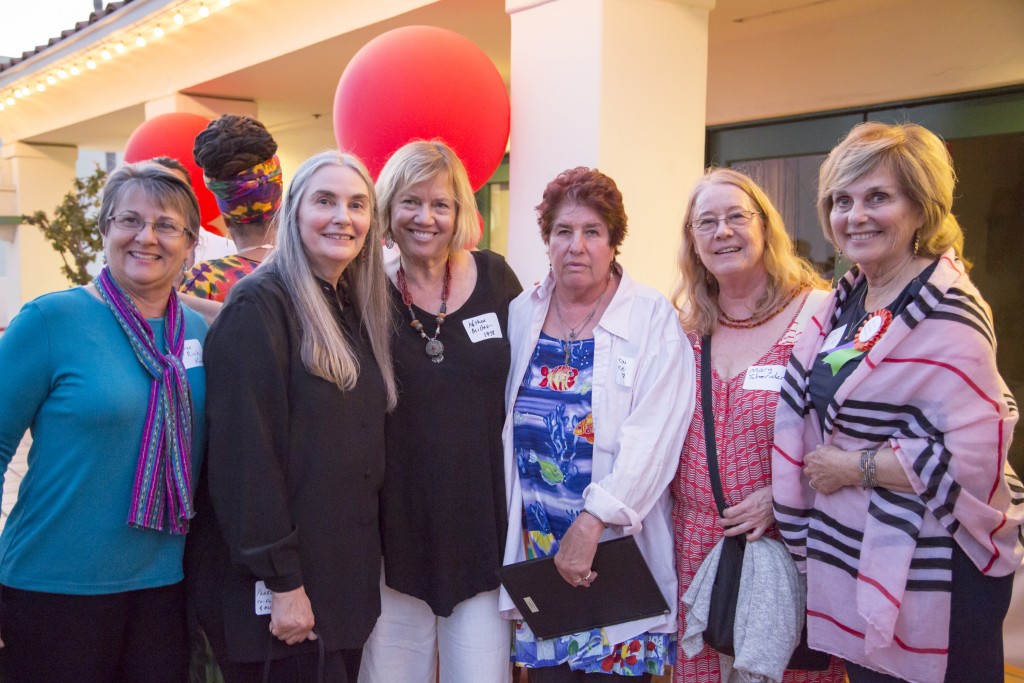 Also honored, were Lynn Houston and Dalia Ruiz who were named as the AUSB Distinguished Graduates for the class of 2015 and 2016 (respectively). The pair unveiled a plaque, which will hang in their honor, and, hopefully, point other talented students toward further success. 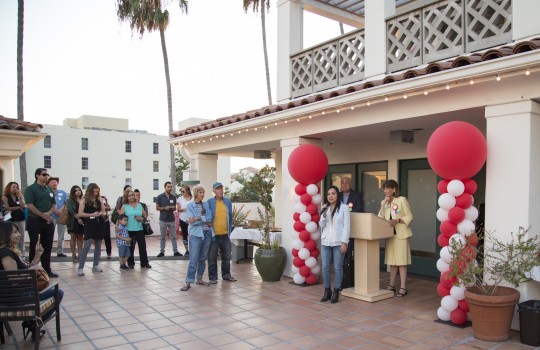 “It was inspiring to hear from talented AUSB alumni about what they are doing to serve our community and about the successful businesses and non-profits they have founded.” reported Abby Pasley, a current faculty member, Antioch Alum, and homecoming guest — who can often be spotted around town doing community service of her own. 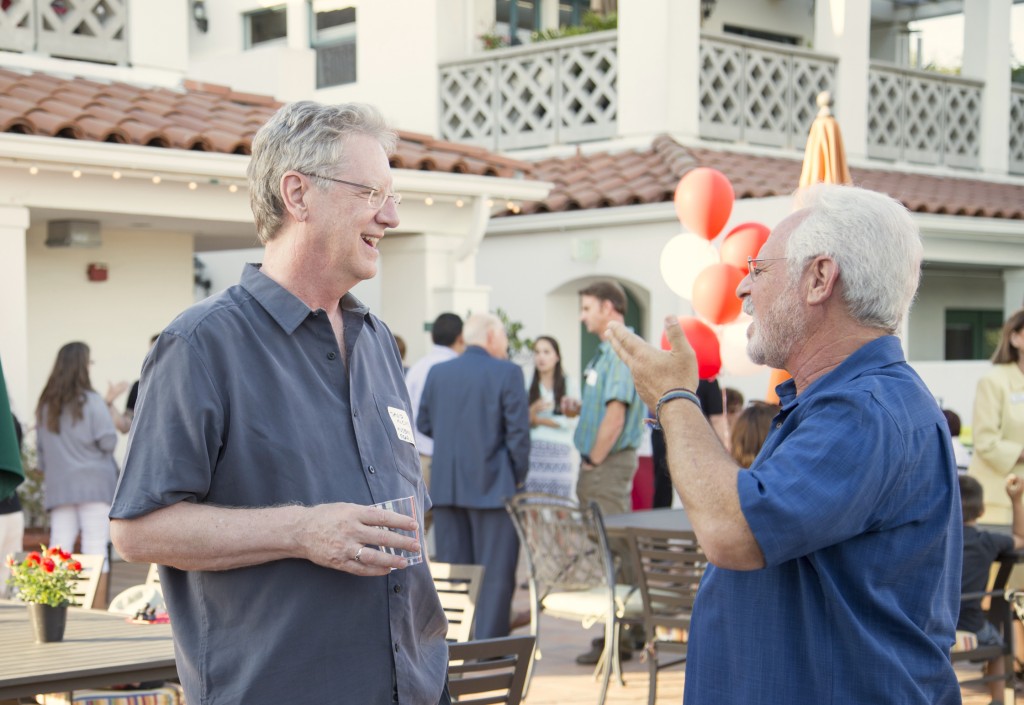 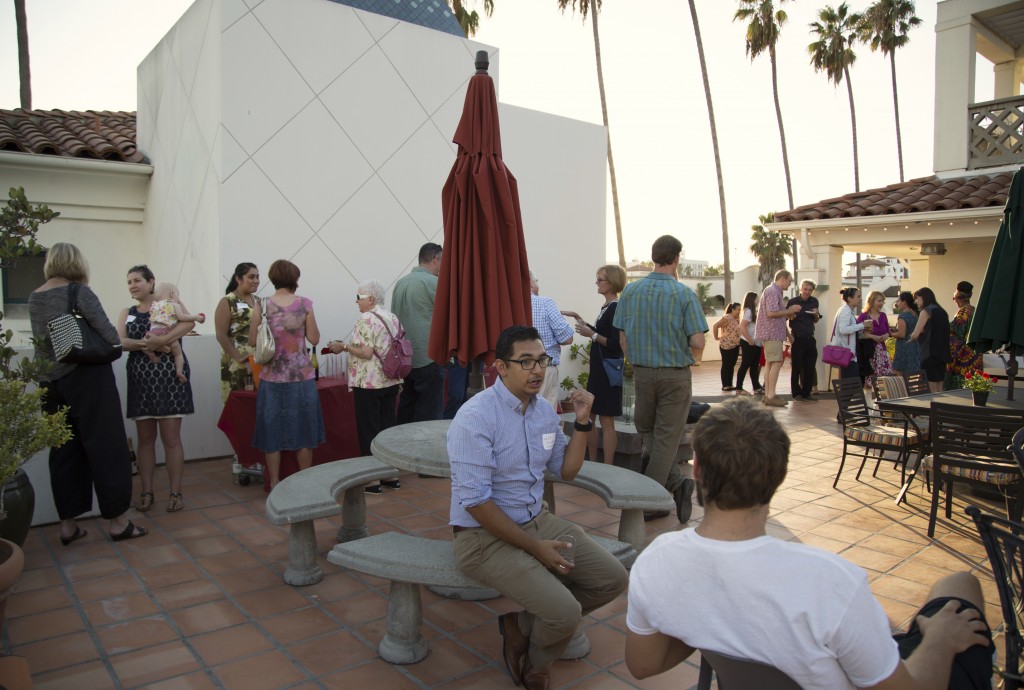 “Homecoming exceeded my expectations in every way”, Greenleaf said in summary of the evening. ” Not only did we have many more attendees than anticipated” she explained, ” but their enthusiasm was much greater than expected.”

“Now it’s on to formalizing the structure of our Alumni Association” Greenleaf remarked, and “many more activities for graduates in the coming months.” 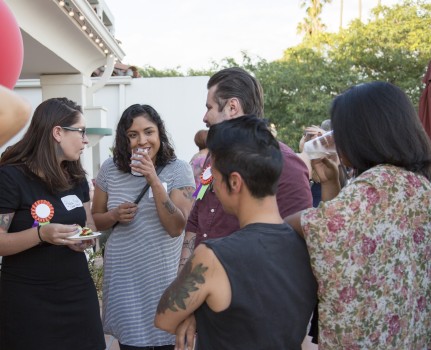 “Homecoming exceeded my expectations in every way”

For those whose enthusiasm made this year’s Homecoming a success, and for others who might be looking for some future Alumni-style inspiration, The Homecoming event will be back next September, as what the AUSB Alumni Association hopes will become a traditional Fall Quarter kick-off on the Santa Barbara campus — for the next forty years. 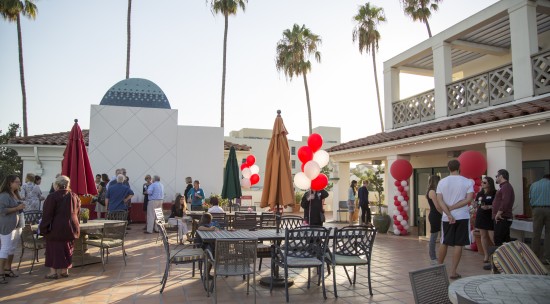