Back with another installment of Cheap College Eats. This time featuring an alleyway eatery, another taqueria, and a fine sandwicherie – all located in town, and all under $10 a meal. Because when the food is this good, there no such thing as too much cheap eats.

Just in time for the mad rush at the end of the quarter – where cooking takes a back seat to the demands of classes – we have another installment of Cheap College Eats. Save your sanity and some cash by checking out these three delicious and cheap eats.

First up is the hidden harbor eatery: On the Alley (OTA) 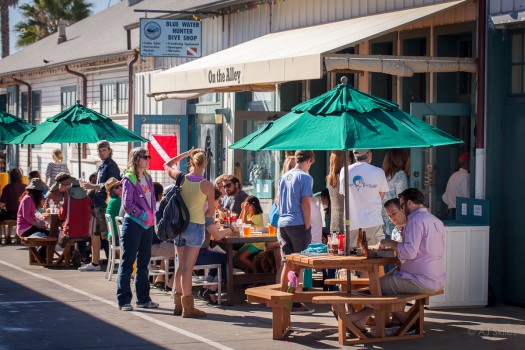 On the Alley got its name from its location in the alley on the Santa Barbara Harbor.

While owned and operated by Brophy Bros, On the Alley has been cranking out cheaper (yet just as tasty) food than its big brother for the last 3 years. They’ve been so successful that they recently opened another location in Goleta. On the Alley (OTA) got its name from the location of the original storefront, literally on the alley of the Santa Barbara Harbor. 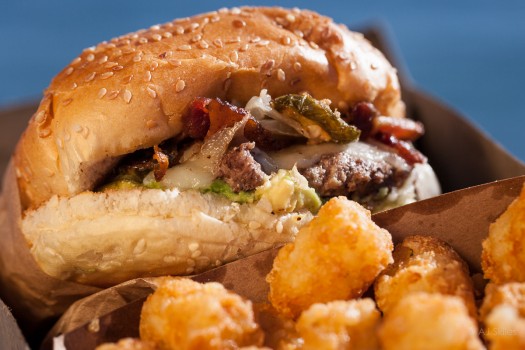 The OTA Burger. As a rule, if the place has a dish named after itself, you order it.

OTA specializes in fried food done just right, not too greasy and satisfyingly crispy. For a couple of bucks more you can upgrade from their homemade potato chips (which accompanies each sandwich) to their deep fried tater tots. While both are excellent, their tater tots possess a crunchy crispiness that compliment all – including more tater tots. 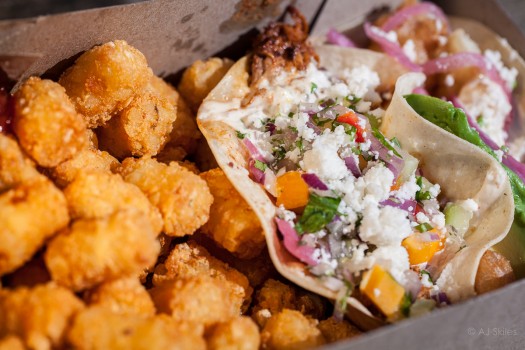 Local Tip: All OTA’s food is served in easy to transport cardboard trays. So take a walk to the seawall and snack on a bench by the ocean blue.

While there is plenty of fried goodness, there is also plenty of other options. OTA also serves up great tacos, salads, and seafood (harbor access means excellent seafood access). But as a rule, if the place has a dish named after itself, I order it. So with this in mind, I ordered the OTA Burger, a wonderful concoction of caramelized onions, fried jalapeno, avocado, bacon, jack cheese, and a fried egg (always a good sign when a place offers egg on your burger, it’s nature’s gravy after all). I also highly recommend their Crab Burger, a crispy crab cake on a bun. 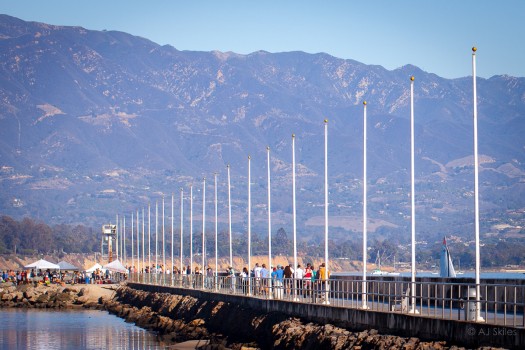 Just because the place is called On the Alley doesn’t mean you have to eat on the alley. Right around the corner is the harbor with terrific views like this.

Seating can be tricky if you choose to eat at OTA, but just because the place is called On the Alley doesn’t mean you have to eat in the alley. All OTA’s food come in easy to transport cardboard trays, so take a short walk to the beautiful seawall where there’s plenty of places to sit.

Prices vary but all under $10. While upgrading to tater tots will push you over the $10 mark, it’s a worthwhile upgrade. OTA also serves an excellent breakfast with items like the local fav Chorizo Breakfast Burger and Waffle ‘Fries’.

On the Alley (OTA) is located at 117 Harbor Way at the Santa Barbara Harbor.

Next up is the culinary champs: Cuernavaca Taqueria 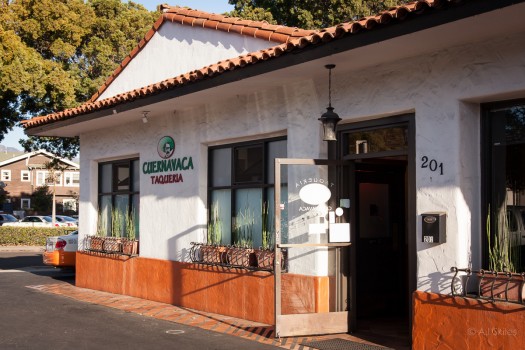 The downtown Santa Barbara location is the newest one of three in Cuernavaca’s growing taco empire.

Cuernavaca is a personal fav and my goto place for cheap and tasty tacos. It’s one of the few places I order veggie tacos from, they’re so satisfyingly umami. My typical taco order is the veggie #2 (mushrooms, pasilla pepper, and melted jack cheese), al pastor (marinated pork), the shrimp and cheese, and the buche. A word or two about about buche (aka pork stomach). Cuernavaca is one of the few places in town that offers up this offal cut, and they are the culinary champions. Buche needs a little bit more care and coaxing to fully realize its favor potential than traditional cuts. The preparation includes soaking and washing the stomach in water and vinegar. Repeatedly. But the results are pure porcine magic.

Local Tip: Change it up by ordering a couple of specials on the small side board underneath the main menu. 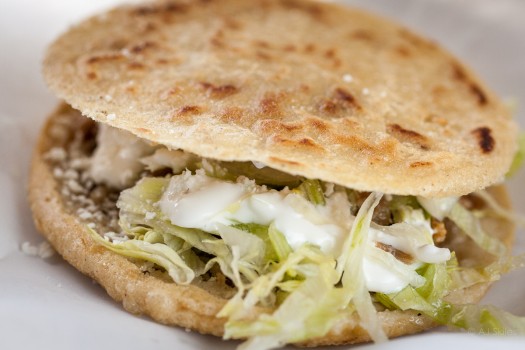 A chicharron prensado gordita, one of many specials on the side board and one of my newest food finds.

And while there is plenty of street taco action, change it up by ordering one of their amazing alambres, which are like fancier do-it-yourself tacos. The local fav (and mine) is the Fortachon, which is a combo of steak, pastor (marinated pork), chorizo (sausage), ham, melted cheese, grilled onions & bell peppers, and fresh avocado served with a not small stack of tortillas. You can easily get two meals out of this one. Or even better, split this dish with a friend and get something else as well. 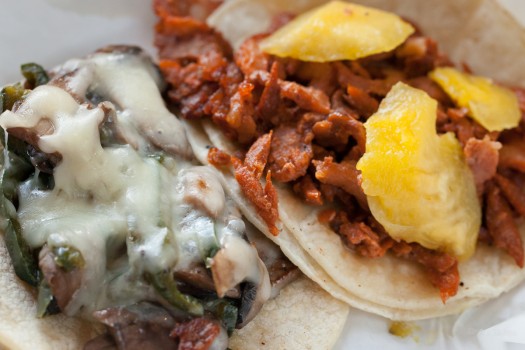 Two of the best tacos in town, Cuernavaca’s veggie #2 and the al pastor taco.

Street tacos are $1.60 a piece for most, while a couple of fancier ones will run you $2.25. The alambres are all under $10 and can be either split or saved for later, you know, like after the resulting food coma. 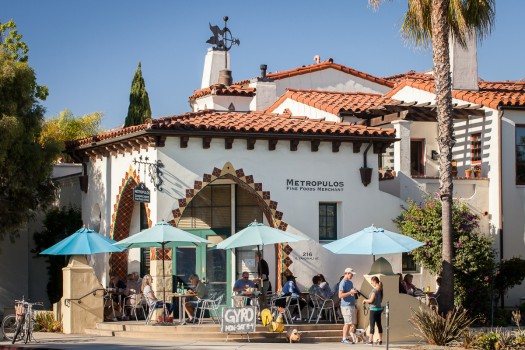 Metropulos where you can find cheap and tasty eats on the edge of the Funk Zone.

Last but certainly not least, is the Funk Zone fav, Metropulos Fine Food Merchants. One of the tastier sandwich creations ever invented is the Greek gyros, the Greek answer to Mexico’s al pastor. Metropulos makes their gyros with a blend of freshly-ground beef and lamb and seasons it with a special combo of spices. The process takes three days and the love and care in the preparation is evident in every delicious bite. They serve their gyros with a house-made tzatziki, chock full of cucumbers and garlic and a simple Greek peasant salad. The gyros have proven so popular that Metropulos has expanded the time they offer the sandwich from just Thursday to Saturday, to Monday to Saturday (they’re closed on Sundays).

Local Tip: Get there early on Saturdays to avoid missing out on the gyros. Because once there out, they are out. 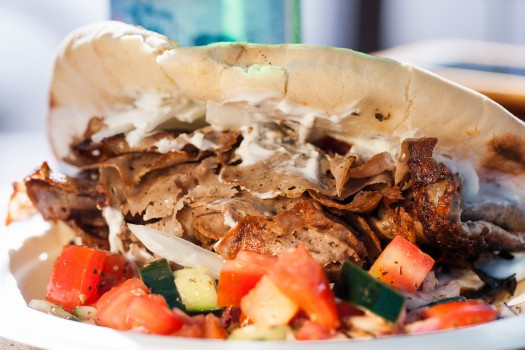 Gyros, the sandwich worthy of the Greek gods.

Gyros are far from Metropulos’ only food fare, they also have a wide variety of other types of sandwiches, salads, and a wide assortment from the fresh deli case. Looking for fancy cheese or a selection of charcuterie? A bottle of super special olive oil? Or how about truffle flavored potato chips? Metropulos is your best bet. 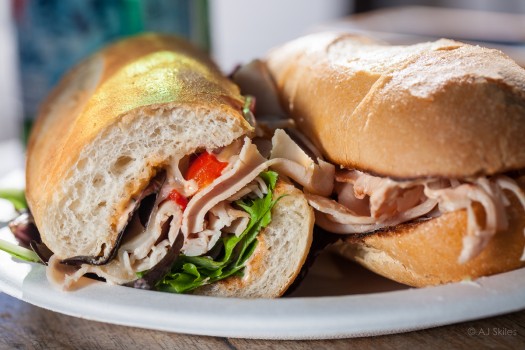