In case you didn’t see the massive aircraft carrier in the Santa Barbara channel this last week end. I’ll have you know you missed out on something awesome. The USS Ronald Reagan made port with us late on friday afternoon, and is headed out to sea again today (monday). It will be the last time you will have been able to see this epic vessel. The USS Reagan is one of a few nuclear powered US navy ships. So saying that we should have felt safer than ever this last weekend is an understatement. The USS Reagan will replace the USS George Washington to become part of the United States seventh fleet, forward-deployed naval forces in Yokosuka, Japan. But only after it makes the voyage to San Diego this week. I was told my many crew members that their time here and Santa Barbara had been nothing but enjoyable and that we as locals have been very hospitable. In my opinion that is a great refection of our community. 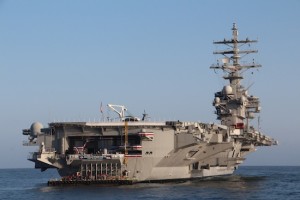 For many, I’m sure it was the same as having just another cruise liner in the harbor, but for those of us who realize how cool and special it was to have such a noteworthy aircraft carrier offshore; it was an honor. Many locals were actually lucky enough to voyage out onto the ship itself, and have a civilian tour of certain areas. I regret not being one of those few. However in the next few weeks I would not be surprised if you ran into someone who was. At which point you could have a bunch of questions for them. So until next time we say good bye.

If you are still interested in learnig more about this awesome ship check out the main website   http://www.reagan.navy.mil/