Trending Now
You are at:Home»Features»SB Local»From D.C. To S.B.: Why I Marched 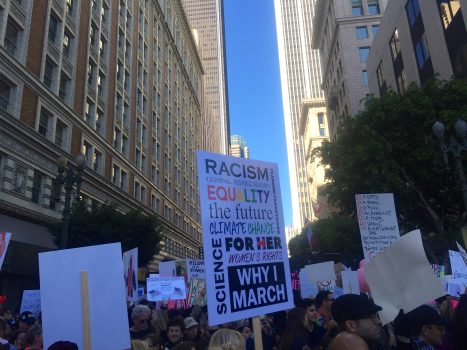 On January 21, at 9:15 a.m. I stood in the middle of the street in downtown Los Angeles, in a crowd so packed I couldn’t see four people in front of me or behind. I’m used to that being an issue, standing at only 5 feet and 1 inch tall, but for once, two extra inches wouldn’t have solved my problem. What I would soon find out was that I couldn’t see or move because an estimated 1 million people were surrounding me, and the march hadn’t even begun.

At 6:30 that morning, my friends, fellow Antioch students, and I were in Santa Barbara, bleary eyed at Starbucks, hastily sucking down our coffee. As the sun came up, we were cruising down the 101 to L.A. Despite the early hour, and the bright pink “The Future Is Nasty” signs greeting me in the rear-view mirror, nothing about today felt unusual.

People had showed up to march in solidarity and support of one another, to march for their right to use their voices, to exist; to be a part of the country they knew as home.

It wasn’t until we exited onto the 1-10 E, twenty minutes outside of downtown Los Angeles, and tuned into a radio station blaring Ashley Judd’s voice in Washington, that I felt the true power of today. Our car fell silent and my entire body was covered in chills as we heard her speak, and the overwhelming responses of the crowd through the speakers. My room-mate and I caught each other’s eyes as she said, “I don’t think we have any idea what we’re about to walk into.” This was going to be bigger than we had ever imagined. 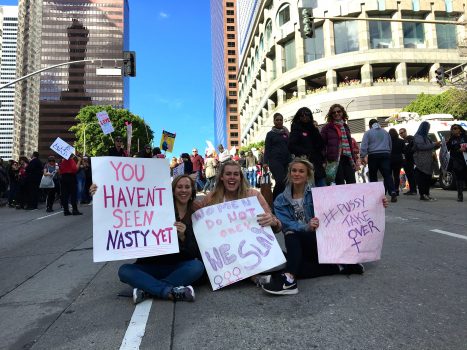 While at the march, I knew I was a part of something much bigger than me, or my life, or anyone else’s. I was watching history unfold, and witnessing the true power of our voices united. Every gender, race, age, etc., surrounded us. There was nothing but happiness on the faces of these passionate and brave individuals. This was so much bigger than Trump. People had showed up to march in solidarity and support of one another, to march for their right to use their voices, to exist, to be a part of the country they knew as home. We all stood together in community, like this was a parade or a festival; not a march brought together due to the sheer necessity and urgency of action that a Trump presidency required.

It’s easy to get jaded in this day and age of technological isolation, to think that people would rather tweet and share a post than act, in person, together. But instead, social media had become the catalyst for hundreds of different worldwide marches uniting. I still can’t believe that  happened, and will continue to happen. For me and many of my peers, attending the march was the first step. I will do everything in my power to continue to act, to unite, and to resist any policies or message of hate, violence, or steps backwards. That is why I marched. 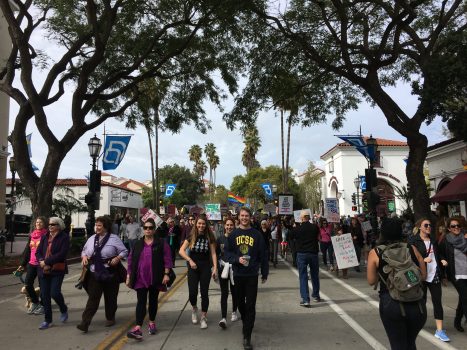 With 673 marches estimated around the country, thousands around the world, Santa Barbara was sure to organize their own. Thousands of people came together from all over to march in downtown Santa Barbara. Fellow Odyssey writer, Lia Durham was among them. Lia marched because she wanted to show her support, and do her part in order to ensure that “the accomplishments that have been made don’t get reversed.” 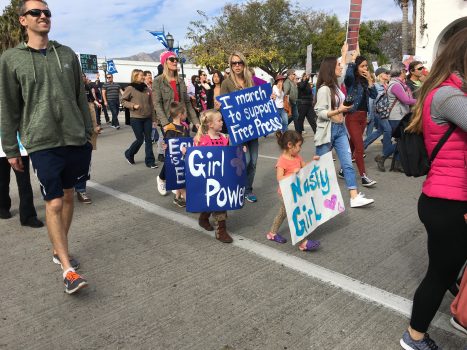 Her experience reflected that of countless others, stating, “Santa Barbara showed up! I’m so proud of my hometown for coming out in a big way to show their support of these issues that may be in danger. There was an energy of love and determination in the air and it was wonderful to be apart of.” 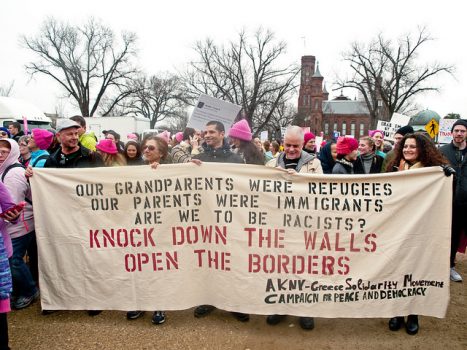 For Isabella Rhodes, a 22 year old political science major at Hunter College in New York City, attending the National March wasn’t even a question. She said: “I guess the primary reason I went was because, as an American and especially as a woman, I feel that Trump represents all of the worst, most backwards ideas that still exist in this country. I went because I think he lacks the tact and intelligence required of the President of the United States. I went because i’m concerned for the state of our democracy. I went because I’m afraid for women and religious minorities and PoC who live in other parts of the country and don’t have a state government that’s interested in protecting them.”

Everyone knew that the Washington March was going to attract a crowd, but few expected how big. When Isabella arrived, she spent 2-3 hours in line for the metro. She didn’t even get to march until 2 pm, hours after the scheduled 10 am start time. But that didn’t affect her, because “Everyone was lovely, including the people who were waiting in line for hours in the cold.” She said there was no violence, or notable counter-protestors to be seen.

Isabella was filled with inspiration and hope upon attending the march and seeing people from all walks of life come together. “There’s nothing quite like seeing a 70 year old white man wearing a big sign that says “This is what a feminist looks like,” she laughed. Isabella met people who drove to Washington from Chicago, Colorado, and all over. “Everyone was represented at the march. There were signs supporting black lives matter, water protectors, reproductive rights, the rights of immigrants and Muslims, and everything else you could possibly think of. And it was great, really. Everyone was supporting each other,” she said, before assuring me that she will be calling her representatives every single day. 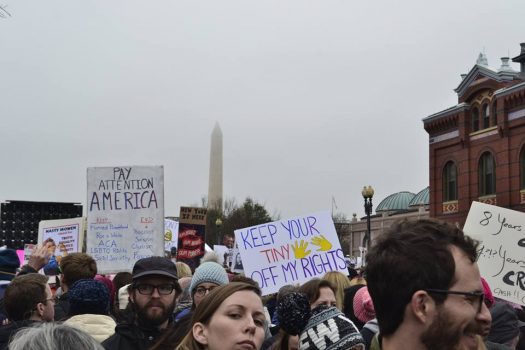