Trending Now
You are at:Home»Current News»Community»Gentrifying Anacapa/Cota: A Chapter in Progress

The student’s of Antioch are privileged with the surrounding businesses of The French Press and Arch Rock’s restaurant. How does the neighborly relations between Antioch University, The French Press, and Arch Rock effect the the value and image of this genuinely developing crossing from State Street?

There is a clear developing trend of establishing “hot spots” for entertainment and enjoyment outside of State Street. In order to get a better view of it, we need to understand how and why these typical areas start gaining momentum. In this case, I will take a closer look at the gentrification of the street crossing East Cota St. and East Anacapa St.

Gentrification: the process of renewal and rebuilding accompanying the influx of middle-class or affluent people into deteriorating areas that often displaces poorer residents – Mirriam-Webster Encyclopedia

State Street has generally been the the meeting ground for drinks and good food in downtown Santa Barbara. During recent years, smaller cross streets from State Street have succesfully established their own niche. Such as the Funk Zone, located next to the Santa Barbara train station, which since 2012 has become one of the more popular locations for drinks, food and entertainment and is gradually becoming a main attraction for Santa Barbara residents and visitors. This proves the potential to improve and emphasize the image of the areas surrounding State Street. 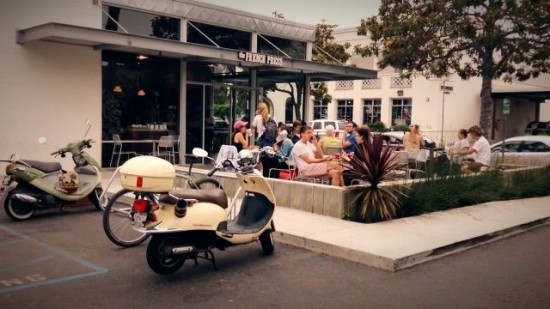 Antioch University is a private liberal arts university located on Anacapa since 2011. Several Antioch students are continuous customers at both of the neighboring organizations of Arch Rock and The French Press. Arch Rock is a seafood restaurant with variations of food and an astounding cocktail bar. Multiple times a week, especially during the weekends, there are several Antioch students and other Santa Barbara resident’s enjoying the sun along with their signature drink The Moscow Mule served classically in a tin cup. The French Press, an ideal destination for either a lunch break or a cup of coffee along with a pastry. Perfect for anyone who’s looking for a 30 minute break. There is an obvious relationship between Antioch University, Arch Rock and The French Press. The people who run these three succesful organizations were kind enough to share their aspect of the current area. 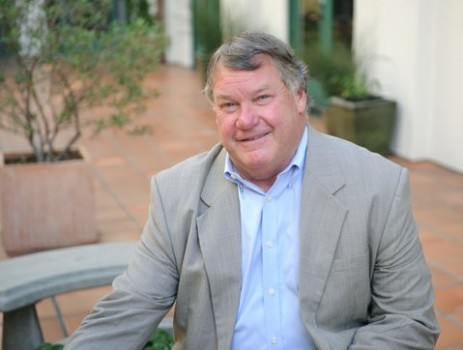 Where was Antioch previous location?

Were there any neighborhood hang outs there?

When did you move to the current location?

Why did you move to this location?

– In August 2010, a user survey was conducted of AUSB faculty and staff. Overwhelming, faculty and staff favored a downtown location for reasons ranging from its proximity to a major feeder community college to “nearness to downtown businesses, cafes, restaurants, bookstores, etc., which add to the campus’ appeal.” The Board of Trustees strongly supports a downtown location. After a review of seven target properties which included a physical inspection, and AUSB Board discussion and direction, attention focused on 610 Anacapa Street. Antioch University Santa Barbara proposes to lease a new property in Santa Barbara. This new property at 610 Anacapa Street will strategically advantage AUSB in the following ways: (1) Save the University financially by securing a very low, fixed rent (2) secure a location for a 10 year period (3) dramatically increase visibility, access, and integration to the downtown (4) provide for expansion and development of additional space. From a strategic perspective, this lease will allow AUSB to gain some square footage immediately while providing numerous options to develop into additional capacity as the need emerges rather than committing to additional space prior to growth.

Did you have have in mind that being located next to Arch Rock and French Press could be beneficial?

– Yes. Residential housing across the street on Cota. 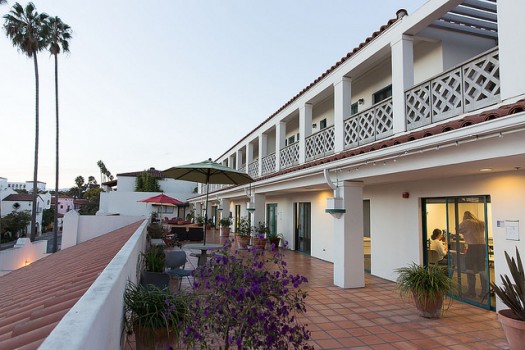 The second level outside padio of Antioch University along Anacapa Street.

Building residential housing on Cota St. will most likely improve property value, there for it was probably a very wise choice for Antioch University to move locations seeing the convinience these apartments would bring the students in the future. Apartments would also increase the awareness of surroundings businesses and organizations that are established but still don’t have the same popular reputation as the other more “central” destinations. The French Press, not really as French as it sounds but they definitely know how to give their customer the perfect coffee break. If you feel like you’ve worked extra hard, they have a wide variety of pastries that won’t disapoint anyone looking for something sweet.

Yelp review: Walking in, the cafe was really clean,  simple and quiet. Good pricing and an unintimidating menu. The decor only hints at the kind of people the owner works are. The choice in music is very neutral. The type of music you might hear in a mid-ninties feel good show. The barista (baristo?) immediately asked for an order with no hesitation and without skipping a beat on his current pull – Sarah B.

Arch Rock is relatively new to the area as well. Similar to Antioch, they can gradually see the area improving and are glad to be part of it. John Bennett is the owner of Arch Rock Restaurant and told us about his view on the current sitaution.

When did it open in this location? 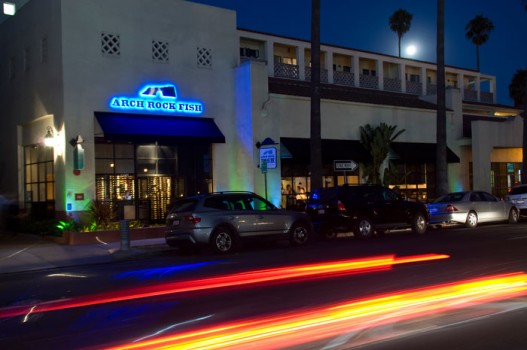 – We aren’t the founders of Arch Rock but were attracted to the “off State St.” energy. We came in February 2014

How has Antioch student’s impacted your business in this location?

– Antioch students are some of our best customers. Both current students and graduates.

Do you notice any major differences when students are of school in between quarters?

– Not a huge dip in business due to the influx during holiday seasons.

Is there a noticeable pattern of the student’s purchases, perhaps your Moscow Mules?

– Happy Hour is a favorite of the students of course.

Have Antioch student’s ever caused any trouble?

– Not once since we have been involved.

– The area is constantly improving. We are happy with our efforts and the positive impact on the area.

Not only does Antioch students serve Arch Rock. Arch Rock will not only bring student’s, but people from all over the area that will notice the wonderful setting of Antioch University and increase the school’s image as an alternative school instead of SBCC or UCSB.

It doesn’t seem like it was planned our or purposely built next to each other. Even though there does not seem to be a distinct  and official cooperation between these three different places, they are beneficial for each other. It is a slow process that takes a lot of time, but as mentioned before, there is a growing trend of hang out spots outside of State St. This particular area had a good start with even better development. Who knows, within a matter of years this might have become the hotshot destination in downtown Santa Barbara and we can proudly state that we were there to contribute!