My Experience in Jail – Part 2

If you have read “My experience in Jail Part 1”, you know that I have been sentenced to jail in a medium security prison for 48hours, a month after I got a DUI in Mammoth Lakes and spent a night in a drunk tank for 12 hours. Let me share with you how this experience felt to me and walk you through it step by step.

The month before: The month before my 48hour in jail was torture. I was literally freaking out every single day of the month. I don’t know if you know this about me or not, but I am not a gangster, I am not a fighter, nor am I a troublemaker. I am a regular student that has never any problems with law enforcement, in Europe, in the United States, or anywhere else in the world.

My friends and I decided to organize a small house party with a “prison theme” to help release some of the pressure. I was completely against it at first but I have to say that laughing about it and having friends showing that they cared made me feel a lot better… for about 1day… The 30 other days of the months before surrendering felt like 300 days. Imagine all the things that could go through your mind in that amount of time; when you know you are going to a MEDIUM security prison. Am I going to get jumped, Am I going to get raped, Will I be the same person when I get out? All this for driving drunk? How stupid am I? Am I going to be strong enough to go through this? I literally imagined a thousand scenarios, and it did not feel good. 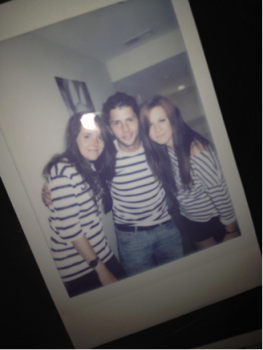 Surrending to jail: So a month later, I’m back in Bridgeport, CA to surrender to the Mono County Jail and serve my sentence. The officer at the front desk and the one that took me inside were really nice, which helped a lot with my stress. But it didn’t last long. As soon as the big metal door closed behind me, everything became more formal. An officer brought me into a small room with a lot of lights. He asked me to put all my belongings into a box, including all of my clothes. It was just like in the movies. “Take off all your clothes, spread your legs, bend over, and cough”. I knew this was going to happen as I was prepared for it. I wasn’t too worried about it, but it was a whole different experience than I had imagined. I absolutely felt violated, although no one actually touched me. After that, I was asked to put on a black and grey striped prison suit, exactly like the one that you can see on the picture bellow. The first thing I thought was “This reminds me of the Daltons in Lucky Luke, although theirs was with black and yellow stripes”. I was surprised because I thought for some unknown reason that all prison suits were suppose to be orange. At this point, I was trying to think about anything that would help me not stress. Entering a jail while being stressed and looking scared isn’t recommended. 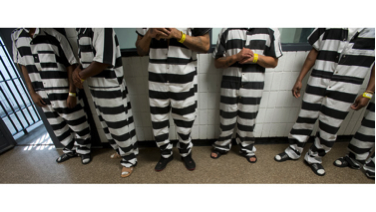 My first steps inside the cell: When I was done putting my prison suit on, the officer gave me a pillow and a nasty, spiky grey blanket. He then walked me into my cell, and told me something that I will never forget: “You look like you are a good kid. These guys might fuck with you. But no matter what you do, do not hit the panic button. Did you hear me? Do not hit that red button. It’ll just make your life harder in here”-solid advice. A few seconds later, I found myself in general population.

As you can see on the picture below, there were two mini dorms with 5 bunk beds each, and a living room connecting the two (where the table is). The mini dorm on the left was for Hispanic inmates. The mini dorm to the right was for Caucasian inmates. Yes, this sounds like we’re back in the 1940’s when we also had separated drinking fountains. During breakfast, lunch, some moment in the afternoon, and dinner, the doors from the mini dorms to the living room were open and the prison rule was that everyone had to go in the living room. No one could stay in the mini dorms during these hours. So when the officer brought me to my cell during lunch hour, I had to sit on this table with my pillow and blanket in my hands-in the middle of all my new roommates- while waiting for the mini dorm doors to open so I could go put my stuff on my bed. It lasted ten minutes. These were the longest ten minutes of my life.

As I was sitting down, I was making sure to not look anyone in the eyes. I was just looking at the walls, waiting for this awkward moment to pass. Unfortunately, things didn’t happen as I wished they did. Two minutes after I sat down, a crew of three Hispanic inmates came to me in a really aggressive way. They were saying things like: “What you doing here homie? Looks like you got lost. Seem like you’re far from home. What’s up? Talk to us, don’t be afraid, we’re not gonna eat you (while laughing really hard).” At that point, I was the center of attention. The light was on me. And it did not feel good.

As I started to lift my head up and look at them, I noticed all their gang tattoos. They were everywhere: Upper body, cheeks, neck, arms, everywhere. I thought I was literally going to get jumped by a gang crew during my first two minutes in jail. Then, the most unexpected thing of all happened. A couple inmates from the Caucasian dorm came to my rescue. The Hispanic guys backed off. The white guys also had a lot of tattoos: Nazi crosses, Celtic crosses, foreheads- it was surreal.

FREAKING OUT: On one hand, I was glad that I had been saved from whatever was going to happen next, but on the other hand I was asking myself if being saved by the Nazi’s was really an upgrade. That’s when I started freaking out (inside my head). I couldn’t show it or talk about it to the inmates there and that was hard. It took a lot of will to do that and I am glad I was able not to show weakness. After that incident happened, I stayed with the Nazi’s and had surprisingly friendly conversation with them: “Where are you from, what are you here for, how long are you in for?” to which I replied: “I’m from France, here cause of a DUI, will only be staying 2 days”. They all laughed so hard and felt bad for me. Told me I was unlucky and had gotten screwed by the system. They were being really friendly. Being pale during winters really helped me out. A couple hours later, the doors to the mini dorms opened and I got to put my stuff on my bed and laid down. At that point, I was really asking myself where I was. It all seemed so unreal, but I knew it was very real.

SURVIVAL: Being friends with the white power guys/Nazis was my only way to survive in there. I knew it. And so I accepted it. During the month before I surrendered to prison, I didn’t think I was going to have any friends or anyone having my back. I thought I was going to be by myself, being the only foreigner that people were going to pick on. That’s why I’ve got to say I was happy to have people protecting me. This was a very conflicting situation for me because I hate Nazis from the bottom of my heart but on the other hand I would have probably gotten beat up or much worse if they hadn’t had my back. Conflicting situation isn’t it?

Things got better: After a day, things were a lot better. It’s crazy to say but after 24hours, I felt like I knew most of what was going on in the jail, traditions, culture, official rules (prison rules) and unofficial rules (inmates rules). I knew almost everyone by name. I felt like I had made a life there. On the second day, I was playing monopoly with my roommates; we were watching movies, talking about girls, and about our lives before jail. It felt so natural. After a day, I can say that I was feeling comfortable being in jail. I had new “friends”, I was safe, I even caught myself actually having fun. How crazy is that? I think that the fact that I got so comfortable after just 1 day is surreal. Imagine if I had stayed a week, or a month, or a year? Would have I become a Nazi? Or a gang member? Or worst? These thoughts have often crossed my mind a lot and I never really figured out what the answer was. I think that from a pragmatic point of view, the only real truth about all this is that I got screwed by the system and ended up in a place where I shouldn’t have been. I also think that jails in America aren’t good for people. They don’t make people better. They make people worst.

I did drive drunk, I did made a mistake, but I feel like the consequences that came from it weren’t proportionate. During these two days, I forgot who I was, I lost myself, my beliefs, and my values. I forgot about everything that makes me who I am. Sure, it was all for surviving but it doesn’t change the facts. Fast forwarding five years later, I think this experience was beneficial for me. I make better life decisions that prevent me from staying in a 9×10 jail cell. I’m more mindful about my actions, because I know that even a stupid little mistake could change my life forever, to a level that I couldn’t ever come back from. Today, I see this experience has a blessing, although things could have gone a lot more wrong. I just really hope that I won’t ever be stupid and/or unlucky enough to go back to a place like that, or any other place like.