Trending Now
You are at:Home»Features»Plastic Bag Ban – Friend or Foe?

In the city of Santa Barbara alone, approximately 47 million single-use plastic bags are used annually. These bags are usually not recyclable, and not reusable due to their flimsiness. If not thrown away, these bags end up in our creeks, drainpipes, and the ocean. Plastic takes a long time to break down, and therefore animals might swallow them mistaking the bags for food, or animals could get wrapped up in them. 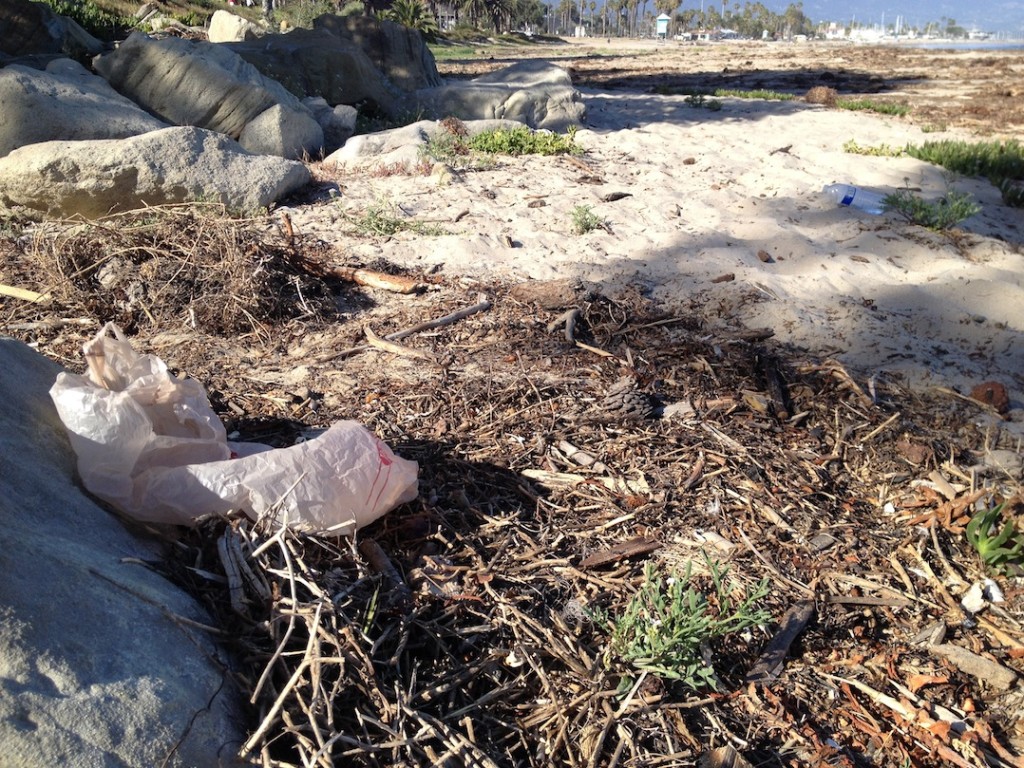 A plastic bag is flying in the wind on Leadbetter Beach. Note the plastic water bottle in the background..

Last Wednesday, on May 14th, Santa Barbara’s Single-Use Plastic Bag Ordinance was implemented. From now on, shoppers will not receive any plastic bags at  the check out anymore, and will also have to pay a fee of 10 cents for each paper bag. The city of Santa Barbara is trying to promote reusable bags and, on a broader scale, wants to ensure a reduction in environmental impacts.

As of May 14, the Single-Use Plastic Bag Ordinance only impacts drug and grocery stores that have at least 10,000 square feet of space. Small liqueur and convenience stores  will follow in November. The city decided to divide the ordinance in such a way to await feedback and see how the ordinance impacts society and the stores themselves. By November, the city is anticipating a city-wide plastic bag ban. 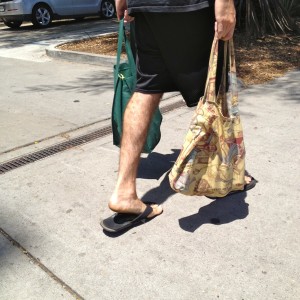 A Saturday’s Farmers Market costumer is leaving with his reusable bags.

The city of Santa Barbara is not the first to eradicate plastic bag use. San Francisco was the first city in the nation to ban plastic bags in 2007. This set the stepping stone for many other cities to follow. Cities, such as Austin and Dallas, TX, Chicago, IL, Capinteria, CA and Los Angeles City and County, CA, have implemented either bag fees or have banned plastic bags altogether.

The city of Carpinteria, CA, located only fifteen minutes south of Santa Barbara, has banned all bags, plastic and paper, at once in 2012. This ordinance has not only been reduced to local grocery and convenience stores, but to all retailers, including restaurants. Austin, TX, was the first city in the nation to implement such a drastic version of the ordinance.

Vincent Cobb, an entrepreneur located in Chicago, IL, calculated the world wide plastic bag consumption. Based on the data released by the United States Environmental Protection Agency in 2001, his calculations estimate a minimum of 500 billion up to 1 trillion plastic bags are being used worldwide every year (as mentioned in the National Geographic). In Santa Barbara city alone, an estimate of 47 million plastic bags are used each year. The problem with plastic bags is that they are non-recyclable, resulting in only filling our landfills. Due to their fly-away tendency, plastic bags often end up in drainpipes, creeks, and even the ocean. Sea turtles will mistake them with jelly fish, their main food source. Other animals may become tangled with the plastic bags. We, the consumers, usually don’t think about these consequences, because we hardly ever see where plastic bag litter ends up. 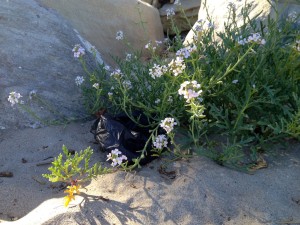 There have been some controversies regarding plastic bag bans. Opponents, such as The Save The Plastic Bag Coalition, argue that plastic bags do not make up all litter on roadsides or creeks. Most litter consists of cigarettes, cups, other plastics, paper wraps, such as gum wrappers, and a mix of various other throw-away containers. The coalition claims that anti-plastic-bag activists blame all the money (apparently $375 million/year) spent in California on the flimsy plastic bags. Opponents of the plastic bag ban in San Francisco, Law professors Jonathan Klick and Joshua Wright claimed that reusable bags are infested with bacteria that come from carrying meats and other products. They found a 46 percent rise in food-borne-illness deaths. The researchers advised consumers to wash their reusable bags regularly – which most likely not many people do. Whether the research gives sufficient evidence for the alleged bag ban resulting in more deaths is questionable. We should still wash our bags regularly, if we choose to use reusable bags.

We live in a throw-away society. We waste enormous amounts of non-reusable and non-recyclable materials and double-bagging at grocery stores is the norm (if not even tripple-bagging). And now everything changes. I believe that we should not complain about this new ordinance, but rather accept it, and move on. Even though some opponents argued that plastic bags do not add much to the whole litter on our streets and beaches, we are at least changing a small fraction of the problem. Baby steps.