Trending Now
You are at:Home»Current News»Environmental»Saving The Gaviota Coast 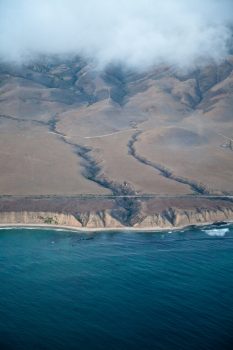 The Gaviota Coast consists of 76 miles of pristine, biodiverse coastline that needs protection from future commercial development. The fact remains that a lot of this land is agricultural land, and is important to save. According to the Gaviota Coast Conservancy, “The Gaviota Coast has a rich agricultural history. Since the pastoral days of sprawling Spanish rancheros, agricultural products of the Gaviota Coast have included cattle, wheat, beans, wine grapes, fruits and nuts. The long growing season of the Mediterranean climate, combined with the even, coastal temperatures can produce multiple citrus harvests each year. Today, the orchards on the Gaviota Coast represent approximately 28% of the county’s total tree crop production. Unique crops such as macadamia nuts, cherimoyas, and abalone are also produced here.”

Land conservation comes down to the land acquisition of 85,000 acres of privately owned land, of which 6,000 acres have been preserved by donations . It also requires a willing seller of the land to the conservancy. If the landowners choose to not develop their land, the conservancy will buy development rights from you, meaning a win-win situation. Often the best solution is for the land to remain in the private owners’ hands for it to be protected. Santa Barbara needs local and sustainable agriculture, and a lot of which are involved in the Williamson Act. This act states that property owners can get a reduced property tax assessment as long as the land is zoned for agriculture use. 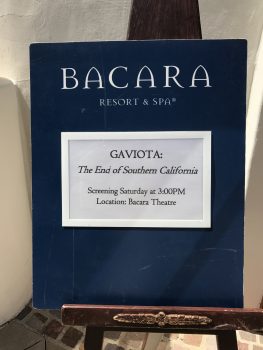 All of these hopes and dreams for acquiring this land take money, which can sometimes be provided by a grant. For example, the grant amounts change over time, and are only available for a certain amount of time before they expire. So the conservancy couldn’t use the $100 million given partly by the Land Trust in 1994. Now the conservancy is looking for new ways to raise money and awareness. Some land that has already been acquired is a portion of the El Capitan Ranch and the Freeman Ranch. The Gaviota Coast Conservancy and the Naples Coalition hosted a benefit for this cause at the Bacara on April 15th and 16th 2017, which purpose was to educate its attendees while raising money. The Bacara let them use their space for free and SCAPE had a raffle of $5 donations, as well as donated proceeds from the art sales.

Shaw Leonard is a key person in the development of the film, Gaviota: The End Of Southern California.

Question: Shaw Leonard, what can we do in effort to help?
“Volunteer, donate, it takes a village more like a city to save this coastline.” 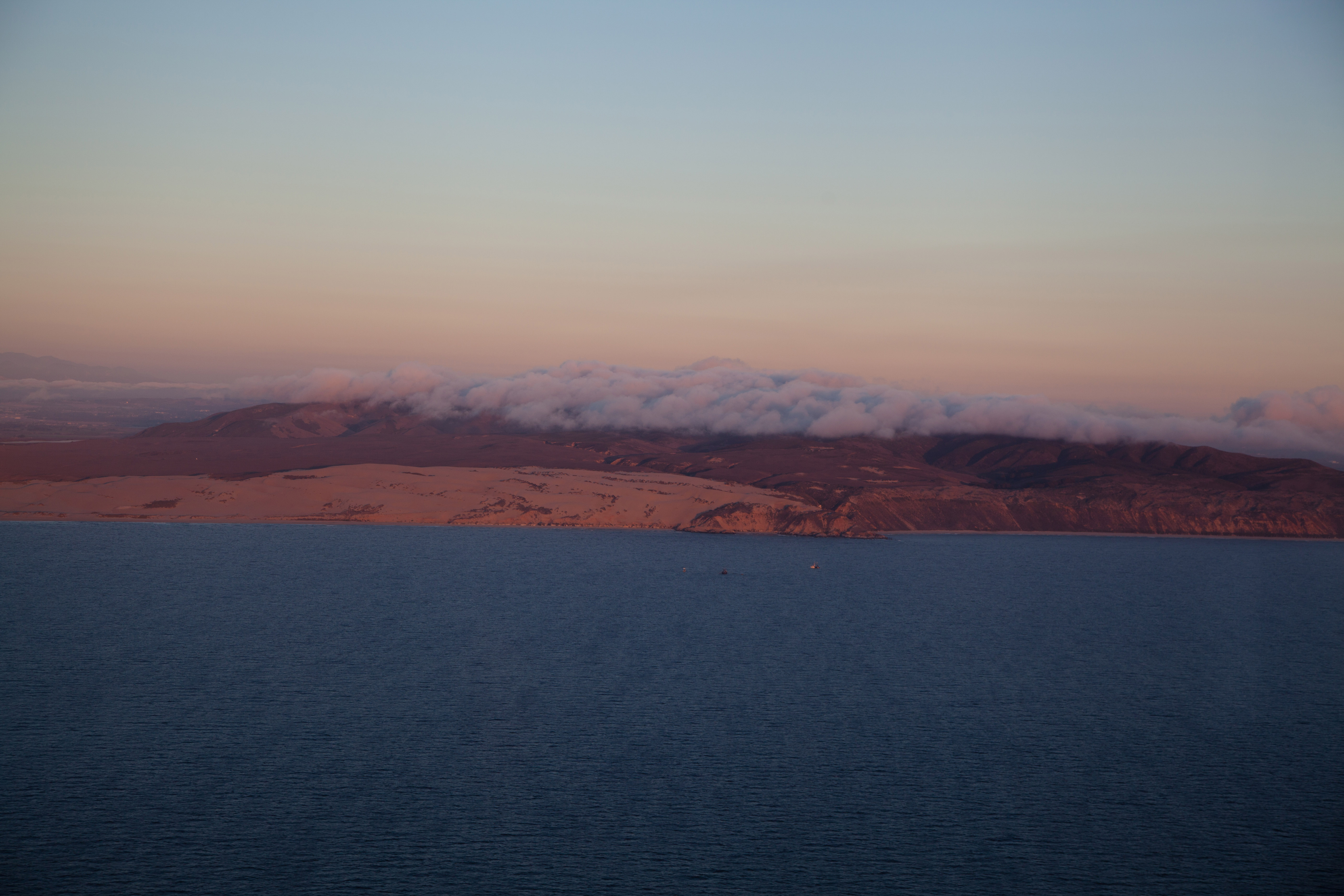 The Gaviota Coast is home to the only coastal Mediterranean ecosystem in North America. Part of what makes this so unique is the southern facing mountain ranges that divert watershed to important bird refuges and beaches. The mountains here are mostly covered with California native plants and chaparral, but are also home to the Manzanita and over 100 other species of plants. Without these, the animals that live here would be in great danger. 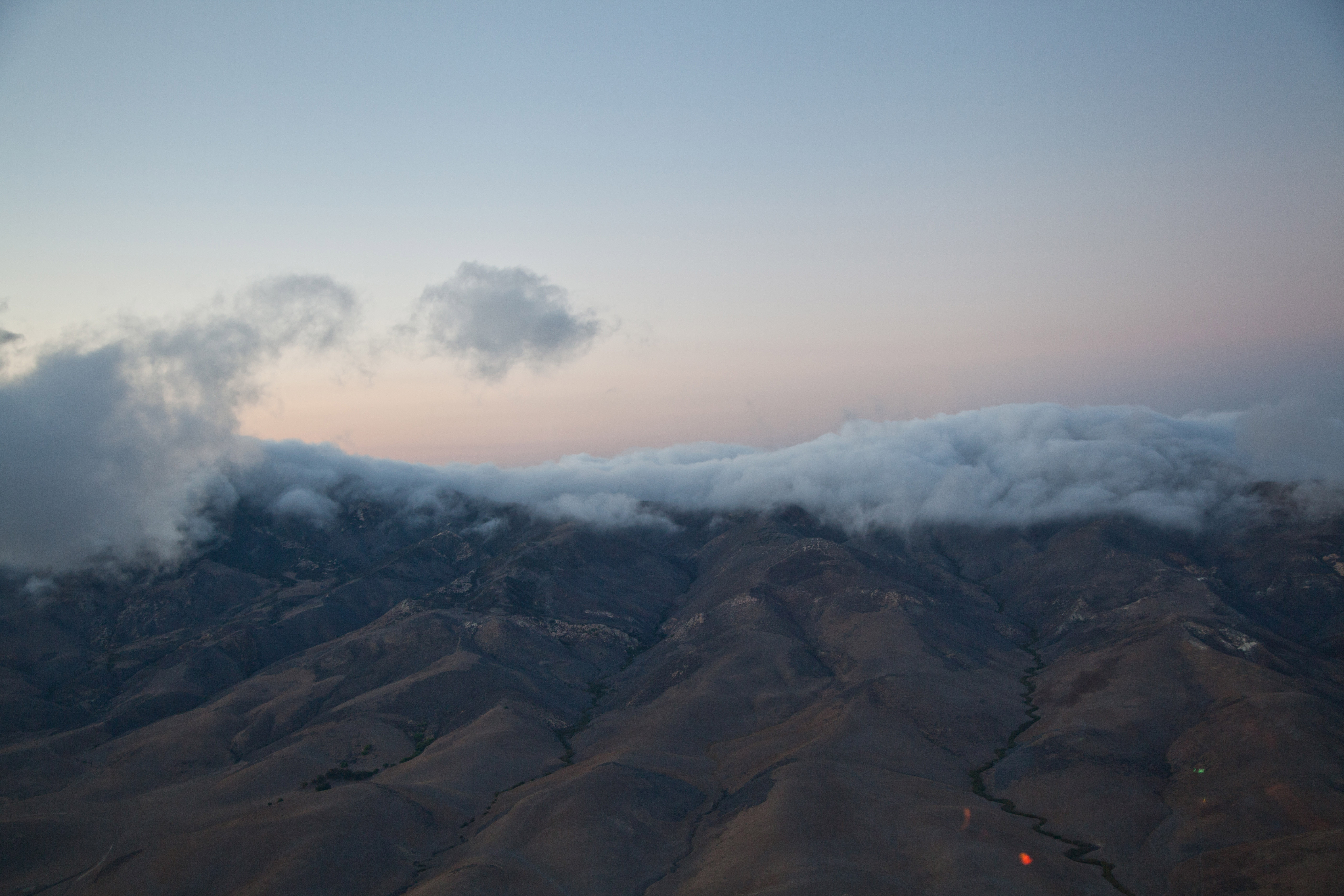 The Steelhead Trout is just one of the endangered species you will find along the Gaviota coast. Others include the Snowy Plover, the California Least Tern, the California Brown Pelican, the California Condor, the California Red-legged Frog, and the Southwestern Pond Turtle. Other more commonly known animals that live along the Gaviota Coast are black bears, mountain lions, owls, and golden eagles. The animals that call this area home come in all sizes, and all matter equally to keep supporting the sustainability here. The riparian zone surrounding these streams creates a habitat for many other forms of life. These include the banana slug and the newt. 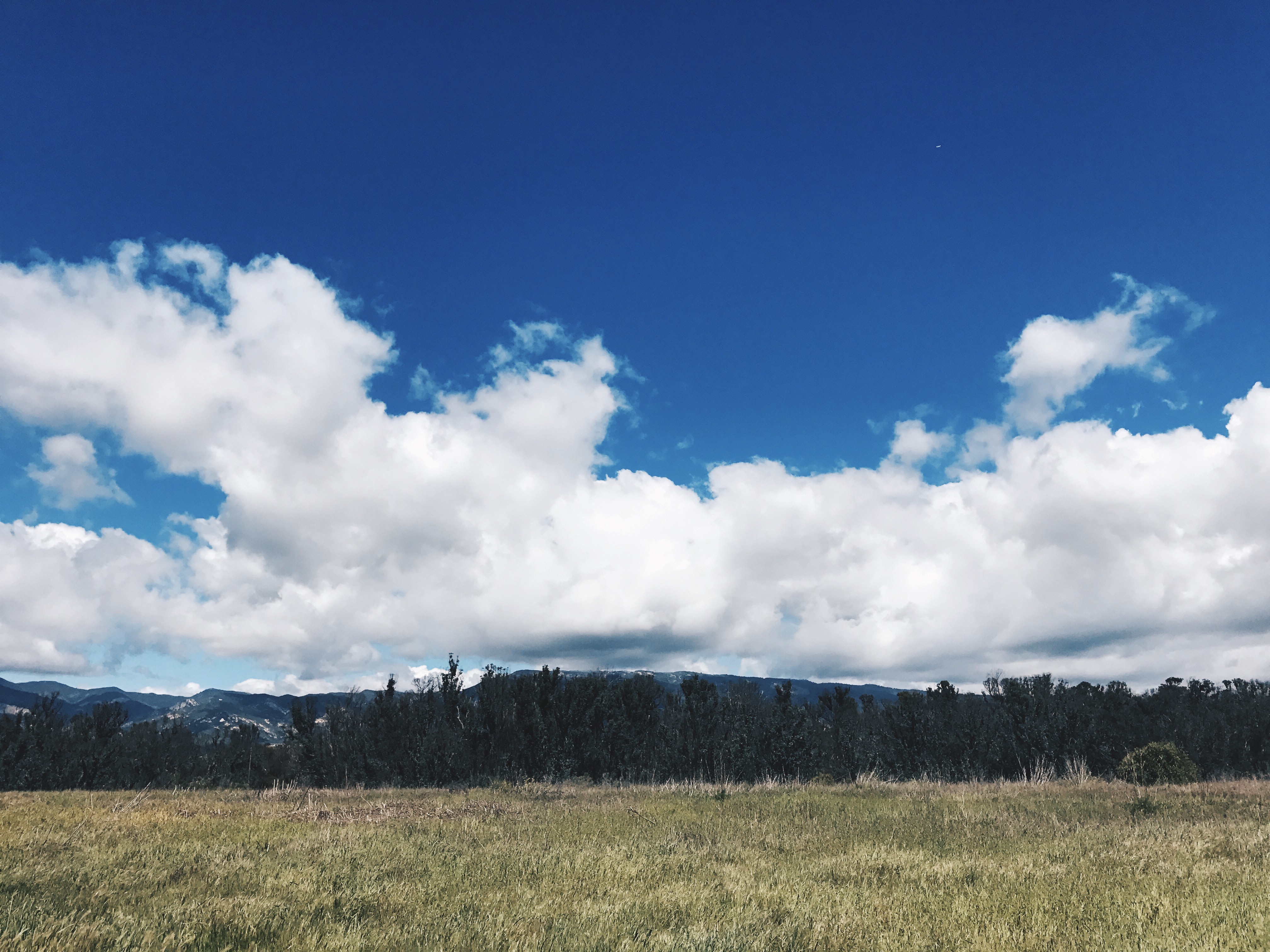 California has lost 95% of these riparian zones, so preservation of this area could mean life or death for many of these species. One area that might sound familiar to locals, and non-locals, is the Ellwood Butterfly Preserve. Here, over 47,500 monarch butterflies make a 3,000-mile journey in droves to the 137-acre preserve. This amazing display of nature is preserved with a generous donation and help from the Sperlings. 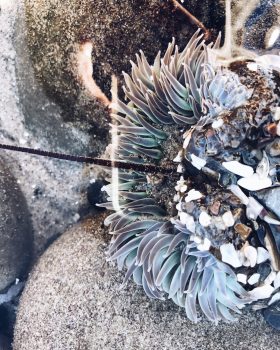 The Tidepools along the coast create a special area which let around 1,000 plant and animal species thrive. Close to these Tidepools are the salt marshes where over 100 species of birds inhabit these wetlands and create a thriving ecosystem. The ocean off the Gaviota Coast is very biodiverse. This is because of the nutrient rich water caused by the mixing of the Northern and Southern currents. The sea floor consists of various types of topography, which makes this stretch of coastline unique. There are over 27 species that inhabit the waters here that include “Albacore, Northern Anchovies, Pacific Bonito, Mackerel, and in years with warmer currents, Yellow Fin Tuna, Dorado, and Striped Marlin. In addition, Dolphins, Gray Whales and other marine mammals can be found in large numbers off the Gaviota Coast. This area also supports such endangered species as the Guadalupe Fur Seal, the Blue Whale, the Tidewater Goby and the Southern Steelhead Trout.” ( Gaviota Coast Conservancy) 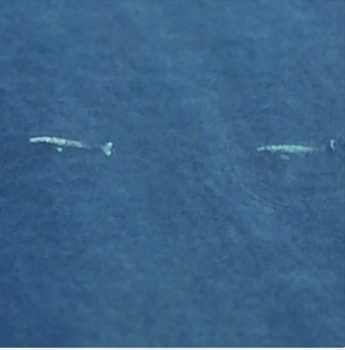 Now the Gaviota Coast Conservancy and the Naples Coalition need a new state bond or a lot of willing donors to further fund their cause. There are a number of ranches right now that are in play on the market; the conservancy’s have to work hard to hold the line while funding solutions are being put together. Please do your part to save this significant area that we call our backyard. A special thanks to Bob Keats from Surfrider Foundation for recognizing this worthy cause. For more information there is an amazing documentary film that was featured at the Santa Barbara Film Festival, The Wildlife Conservation Film Festival, and The Earth Day Film Festival, Gaviota: The End Of Southern California. It details a journey of the Gaviota Coast that is something to be remembered for generations to come because a lot of people are unaware of this area. The trailer is embedded below. So this leaves us with one question. Why would we develop the only remaining peice of pristine California coast to give way to big box stores and cookie cutter neighborhoods? But more importantly why sacrifice the wildlife that is on the edge of extinction that calls this their home. 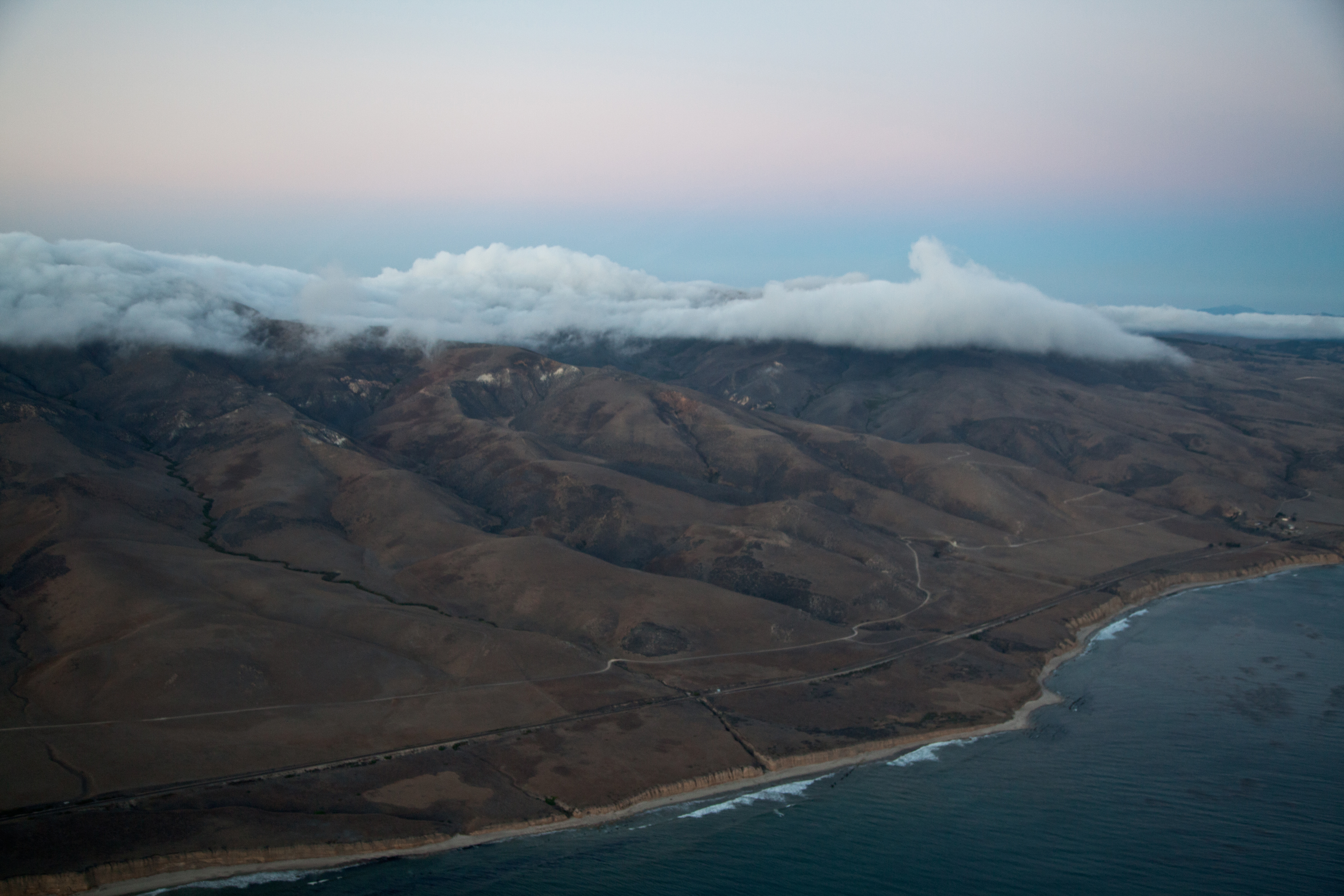 Andria Kester is a 23 year old, third generation, Santa Barbarian. She currently attends Antioch University Santa Barbara, and is getting her BA in Marketing. Andria has a creative side that pairs well with her attention to detail in all aspects of her life. She is hard working, and has a great deal of work experience that she hopes to combine with her degree after graduating. In her spare time she enjoys spending time with her friends and family, her English Cream Golden Retriever Nala, going on hikes, and working on her photography.