Trending Now
You are at:Home»Features»Active Shooters on the rise, Can it happen at Antioch?

Does Antioch staff, faculty and students know what to do if there is an active shooter on campus?

“It’ll be like the LA Riots, the Oklahoma Bombing, WWII, Vietnam, Duke and Doom all mixed together…I want to leave a lasting impression on the world…if by some weird as shit luck me and V survive…then we will hijack a hell of a lot of bombs and crash a plane into NYC.” (Excerpts from Eric Harris Diary, Columbine High School Gunman)

Eric Harris and Dylan Klebold changed the world as we know it. On 20 April 1999 they murdered 12 fellow students and teachers awhile wounding 21 more at Columbine High School. Their massacre brought worldwide attention to the phenomenon of Active Shooters and changed how law enforcement trains for these types of incidents. Fifteen years later Santa Barbara County would become victim to its own active shooter, Eliot Rogers.

When and where will it happen next? 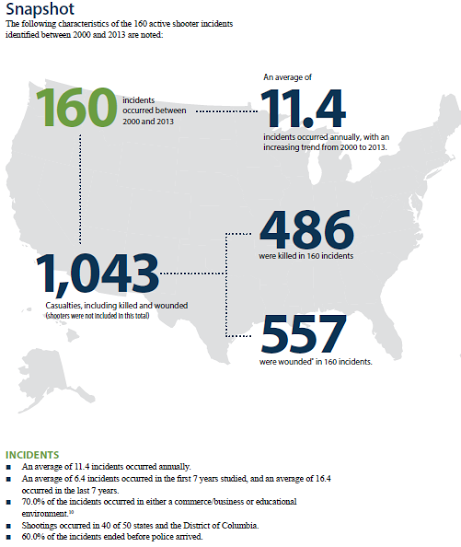 As an Antioch student I often find myself wondering and evaluating what to do if an active shooter incident occurred on our campus. I am constantly studying my environment: where should I sit so I can see the entire room? What are my escape routes? Who, if anyone else knows what to do?

My twenty-year military career trained me to think this way. It also ultimately prepared me for my current career: I support law enforcement agencies in their response tactics to active shooter situations. Does Antioch have a safety and response plan if this were to happen?

“THE STATS SPEAK FOR THEMSELVES”

Statistics show that law enforcement training alone is not enough to stop these stone-cold killers.  Active shooter situations happen in a very short amount of time with the majority of casualties taken in first 2-5 minutes. This leaves very little time for specialized units to respond.

ACCORDING TO THE Department of Justice:

Active Shooter incidents often end before police arrive. In at least 40% of the shootings, citizen engagement or the shooter committing suicide ended the shooting at the scene before law enforcement arrived.

■ In 37 incidents (23.1%), the shooter committed suicide at the scene before police arrived.

■ In 21 incidents (13.1%), the situation ended after unarmed citizens safely and successfully restrained the shooter. In 2 of those incidents, 3 off-duty law enforcement officers were present and assisted.

■ 11 of the incidents involved unarmed principals, teachers, other school staff and students who confronted shooters to end the threat (9 of those shooters were students). 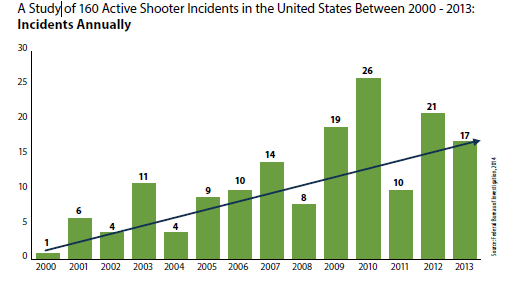 ■ In 5 incidents (3.1%), the shooting ended after armed individuals who were not law enforcement personnel exchanged gunfire with the shooters. In these incidents, 3 shooters were killed, 1 was wounded, and 1 committed suicide.

■ The individuals involved in these shootings included a citizen with a valid firearms permit and armed security guards at a church, an airline counter, a federally managed museum, and a school board meeting.

■ In 2 incidents (1.3%), 2 armed, off-duty police officers engaged the shooters, resulting in the death of the shooters. In 1 of those incidents, the off-duty officer assisted a responding officer to end the threat. 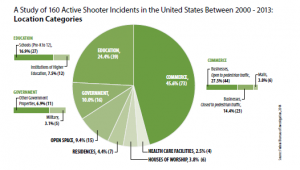 39 of the 160 incidents occurred in educational environments in which a dozen occurred in institutions of higher learning like Antioch, accounting for the second largest category of locations for active shooters to commit their crime. The largest category of location is classified as places of commerce with 73 incidents occurring within them. Antioch’s proximity to these types of businesses also presents a potential threat to our students making training and awareness even more relevant.

Hope is not a method, training and awareness saves lives:

We should not live in fear. But we shouldn’t PRETEND THAT IT WON’T HAPPEN TO US. Recently, I was discussing training scenarios with a Police Chief of A small coastal town and he shared with me that during an out of state police training conference he was able to speak with the Police Chief in Columbine, Colorado. During their discussion he realized that the demographics of Columbine were almost identical to those of his small community.  That is when he truly realized that his community was not immune to this epidemic.

On 9/11 2001, United Airlines flight 93 ultimately did not meet the hijackers intended target due to citizen intervention. Flight 93’s passengers realized that they were the only line defense against this active threat and took action. Arguably, there actions have deterred terrorist’s from this style of high jacking to ever occur again.  This proved true when terrorist Richard Reid, The Shoe Bomber, was subdued by passengers while trying to detonate a bomb on American Airlines Flight 63. Citizens have taken action against active shooters as well. Unarmed citizens ended 21 of the 160 active shooter incidents studied. The FBI characterized their actions as, “selfless and deeply personal choices to the face danger of an active shooter” 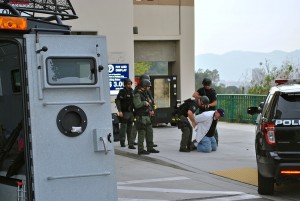 Every school, business, government entity and law enforcement agency possesses unique characteristics from types of building, clientele, employees, students, locations and levels of access granted. These differences are key factors when reacting and responding to emergency situations and should be the focus when determining methods for deterring and defending against an active shooter. I would encourage every citizen to read the entire DOJ/FBI report. 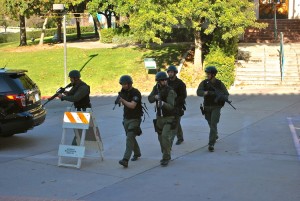 The Department of Homeland Security has several training programs and tools for public release that can help us better understand how to prepare for active shooters.

It is my hope that no one will ever have to experience this type of tragedy again but, Hope is Not a Method. Awareness, deterrents and training are our only real options.