Trending Now
You are at:Home»Features»Falling Through Cracks: When The Safety Net for Young Adults With Autism Spectrum Disorder Fails

Imagine spending days in the hospital emergency room with your child—who at times is strapped on a gurney sedated and restrained-—because there is no other place to go?

This is the reality for young adults with autism spectrum disorder —as it was for my twenty-two-year-old daughter—who experiences such severe aggressive or self-injurious behaviors emergency intervention is necessary.

Few will have a place to go after discharge.

Most people with ASD do not experience aggressive behaviors, but for those that do, a road of hardship will likely ensue for them and their families. According to researchers Weiss and Lunsky, aggression, self-injury, and property damage are the major causes leading to hospitalization for people with autism spectrum disorder and intellectual disorders.

ople with ASD and ID are hospitalized at a rate six times higher and will likely have longer psychiatric hospital stays than people without ASD. Many will not receive appropriate treatment that is tailored to their unique needs due to lack of understanding, knowledge, and training by mental health professionals. A recent study found that mental health treatments are challenging due to individuals limited communication skills, unique individual challenges, as well as the mental health field’s tendency for diagnostic overshadowing, which is the assumption to contribute behaviors to the developmental diagnosis, not necessarily the mental health diagnosis. 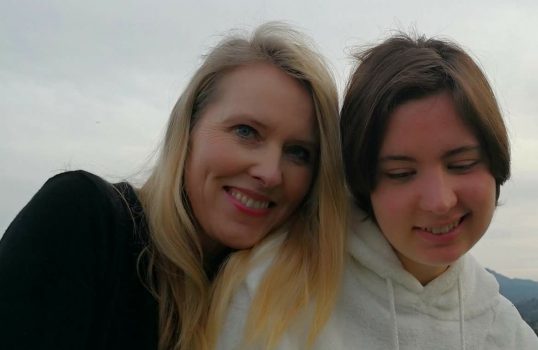 The ER route was certainly the case with my daughter after months of trying to control and redirect her increasingly aggressive behaviors as medications targeting her mood disorder were failing. Sleepless nights turned into manic episodes; drinking glasses, ceramic cereal bowls, picture frames came crashing down, her fists and legs turning on me. She lunged after dogs and strangers attempting to tackle them. Keeping my daughter and myself safe inside our mostly barren apartment became a task. I walked on eggshells while I wrestled with exhaustion and lack of sleep. Little did I know that a mood disorder, such as my daughter’s bipolar disorder, increases the risk for hospitalization seven times fold. We were hurtling toward a crisis.

My daughter was admitted to a psychiatric hospital where the staff struggled to understand her autism. She was heavily sedated, at times restrained to control her behaviors, but she regressed as her behavioral challenges increased. After seven weeks, she was discharged back home as there was no other place available. Two weeks later she was back in the ER.

As my daughter was getting ready for discharge from her three day stay in the ER, her emergency room nurse came out to talk with me in the waiting room.

When you have someone with autism and behaviors, very few places are willing to take them. We see this happen so many times. Once we had an autistic man stay in here for 110 hours.

Few residential facilities and group homes are willing to accept severe behavioral challenges. Chances are, going home is the only option available.

Right now, 80,000 autistic adults are on waiting lists for residential placements that can be up to 10 years long—The Atlantic

In addition to the long waiting list, another major hurdle is that group homes and residential facilities can deny placements if they deem the individual is not a fit. Group homes, called community care facilities, are regulated and funded by state departments. They are owned and operated by either nonprofit or for-profit organizations or private individuals.

The state-run Development Centers that have been providing homes for the developmental disabilities population in California—and for people with severe behavioral disorders—are closing in an effort to comply with new shifts and trends for communal living. For individuals with ASD, ID, and mental health diagnosis who experiences serious behavioral challenges, they will not only have difficulty partaking in social life, day programs but also accessing long-term housing placement. Studies found that psychiatric disorder in conjunction with intellectual disability is a major reason for failure for community and residential placements.

The first failure for community placement came on the morning of my daughter’s third day in her new day program. The week prior, my daughter had graduated from successfully completed three years at her public post-secondary school where she had few behaviors. Failure was going to be harder than I had ever imagined. The “process of failure” was repeated with two other day programs, followed by failure to secure a few different housing placements. Since she turned 22, my daughter has had no place to go.

Rebecca Zornitsky a coordinator for the Autism Speaks Autism Response Team said that they receive many calls from parents whose children had lost their day programs or group home placements. She admitted that, “It becomes too much to handle for those places that are best suited to fit.”

There is no mandate that states these places have to accept an adult individual into their program, like the mandate governing public schools. Children with ASD and developmental disorders are ensured—through federal laws—that schools provide special education and services. This mandate ends when the children age out of the school system at age 21. Adults, age 22 and over, with qualifying developmental disorders, residing in California receive services through one of California’s 21 non-profit Regional Centers. The Regional Centers, overseen by the Department of Developmental Services, are contracted to find resources, housing,  coordinate support and services, and help with transitions for persons with developmental disabilities and their families.

Transitions are hard for a young person with ASD. When school-based services end they are thrown into a life they may not be ready for.  Autism Speaks states that approximately 50,000 youth with ASD age out of the school system every year. The demand for crisis intervention, appropriate psychiatric hospitals, program placement and housing for individuals with ASD and mental illness is likely to increase. When my daughter was diagnosed with autism, the prevalence was 1 in 150 children. Now nearly two decades later, it is 1 in 59. Individuals with ASD are highly vulnerable to developing a mental health disorder. As the numbers of children diagnosed skyrockets, there will be even more need for mental and behavioral health services and appropriate long-term placements. Better research of ASD and mental health, planning, transitions, fast-tracking to programs and access to services must be in place to ensure a better understanding of people with ASD disabilities and their families.

Falling through the safety net is one of the most painful and emotional excruciating experiences of living at the end of the autism spectrum. We were left bruised, shaken, as we stumbled in the dark haze after our fall through the net. We, like many other families, are getting back up, keep looking forward, engaging with service and medical providers hoping someday soon our loved ones will have a place to go.

Eva Loeffler studies liberal arts with an emphasis in psychology at Antioch University, Santa Barbara. Eva is originally from Trondheim, Norway. Eva is the proud mother of two beautiful daughters. She is a nature and animal enthusiast and can often be found exploring the trails and wildlife with her trusted companion, a black horse named Minnie. Eva plans to pursue her masters in Marriage Family Therapy. Her mission is to create a therapeutic setting using nature and animals to support human well-being.