The most significant of classroom management is making each student feel safe and confident in their ability to participate. A simple way to ensure a positive learning environment is decolonizing the reactionary language while sharing information with students. Students expand on the treatment of their classmates from their teacher’s response and treatment of others. Criticism of individual or cultural-linguistic variations is one way a student experiences an attack on their self-esteem. A child’s speech pattern or use of a foreign language should not leave them stigmatized throughout the remainder of their educational career. A testament for educational justice outlined in a TedTalk explains the issue. “It means that this is a principle that says that we are invested in understanding that our institutions must be adaptable, must be accommodating and truly inclusive of diverse ways of knowing.” New and updated information on a YouTube video can enlighten administrators, students, and parents. 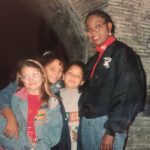 As a former teacher, my concern is prompted by witnessing students ridiculed by teachers throughout my education and career. In my experience in a multilingual classroom, while working for the International School of Naples, Italy, I taught English as a Second Language. With six different languages among the pupils, I wanted to ensure they understood the rule of “not wrong, but different” during our lessons. For this reason, we had many opportunities to learn each other’s languages, the styles of syntax, and vocabulary in a way that was informative, fun, and respectful to everyone in the room. “I completed my homework, Mrs. Rose,” “I fatto (fah-to) my homework, Ms. Rose,” and “I been finished with my homework, Mrs. Rose,” are the same sentence essentially. The result is an accumulation of several ways to express the same idea. The respectful engagement minimized disruptive behaviors in the classroom and negligence of assignments. A paradigm shift and paused response prompted increased sharing within class discussions. It is important to trust students to understand the origins of their native tongue. They have great pride in their culture and language, culminating in additional pride in learning an English translation.

The adaptation includes mindful teachers who allow students to be themselves and maintain their voice, even if that consists of a few words in a foreign language or unfamiliar vernacular. Articles discussing the continuous development of World Englishes, like Ebonics, force a paradigm shift and acceptance of new concepts in this area of education Dennis Barron Immediately following the praise and recognition for a melting pot acceptance of varied linguistic expression in the classroom, the ideals were rejected, and the Federal Bilingual Education Act was implemented. Federal funding was allotted to separate African Americans from their classmates based on linguistic bias.

African American Vernacular English, or AAVE as it is referred to, has again been thrust into the public eye as an important discussion. Teachers with a background in etymology would be better equipped to pause, redirect and encourage their students while maintaining a respectful response to AAVE, slang, or use of foreign vocabulary by their students. One infinitive verb or Spanish word should not disrupt an entire lesson on atom structure. 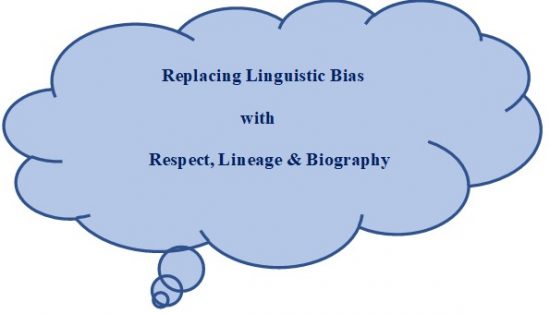 “AAVE is the most researched dialect in America, yet it still is the least respected.” ~ Camille Byrd O’Quinn, Asst. Professor & Coordinator of Clinical Education of the Master of Science in Speech-Language Pathology.

My conversation with Professor Amiri Mahnzili M. Ed. prompted more perspectives on the matter. Prof. Mahnzilli’s specialization in Pan Afrikan Studies and focus on Ante-Modernity Indigenous Afrikan Epistemologies associated with critical pedagogy applies concepts through training and application. His success working with youth at the TEACH Academy of Technology Junior High and other community programs over the last four years encompasses the theory of “the gumbo.” Gumbo, like the Creole cuisine, is an example of many features mixing and making a delectable aspect within the American English language. A formal enhancement shows that educators can be more aware of their students’ comprehensive ability. “It is a pedagogical shift that illustrates the relevance of having reciprocated interaction within the classroom. origins of enslaved West Africans America’s national pride is based upon numerous populations and origins. Yet, those origins are not linguistically celebrated in the classroom and become a continued historical implication of dominant culture over marginalized communities.”

“Whether it be changing the meaning of words completely, changing nouns into verbs, or vice versa, young speakers are always innovating, and the language is continually in flux.” ~ Kellam Barta, Founder of NDSU Language Diversity Ambassadors.

Suppose the definition of bullying was an interpretation of the situational response. Would funding be appropriated to add federal, state, and county funds for training and curriculum? Pride in one’s heritage stems from this melting pot, so the option is to allow students and staff to be sensitive to the origins of language. Recognition versus an ostracizing response for mainstream English as the only way of expression is unfair to educational development. Dialects, not comprehensive language skills, are an unexpected pen-turned sword for diminishing a pupil’s confidence, invoking disciplinary action, and eliminating students deemed problematic. Over 30 years, research has documented the impact of teacher attitudes and expectations on instruction and, ultimately, on student outcomes teachers’ knowledge of and beliefs and attitudes.

There is rumbling about addressing the decolonization of linguistics in the classrooms to help America’s future generations. Although it is long overdue, it appears now is the best time. Previous concepts of diversity and slogans for tolerating diversity may come to fruition if educators begin to carry the torch leading the way. Teachers and students would become active participants in the change we are all asking to see in the world. A solution is plausible through extensive training for educators, administrators, and students in the study of etymology.

Jacqueline Rose is a happily married wife of 30+ years and mother of two wonderful daughters. Her professional career has supported educational opportunities and social justice reforms for over 20 years. Jacqueline's implementation of strategic planning and business plan has benefited the International School of Naples, Italy, Noel Compass Scholarship, and public school districts in Maryland and Wisconsin. The inquisitive nature of Jacqueline's personality has enabled a life inhabiting many geographical locations within the United States and Europe. She enjoys exploring various cultures, ideologies, and the intersectionality of how daily life overlaps with a vast number of unexpected experiences. Jacqueline's commentaries are purposeful to resonate with readers to reflect, motivate, and encourage the desire for lifelong learning and empathy toward a heightened understanding of the learning process for all ages. Her poetry and journalistic op-ed articles for the Stevens Point Area news media outlets and Annapolis, Maryland P.T.S.A (Parent, Teacher, and Student Association) has led to strong relationships for continued business interactions and educational opportunities. The submissions become affirmations for collaborations and positive outcomes.