Trending Now
You are at:Home»Features»Opinion»If this is a Revolution, I want a refund!

“You say you want a revolution? We would all love to see the plan!”

As the armed standoff draws to a close in Eastern Oregon, unanswered questions remain. First and foremost, why the Fish and Wildlife Reserve in Burns Oregon? Why attempt to pull off this stunt in the middle of winter? If the plan was to hunker down for a long siege, why wouldn’t they bring enough supplies? This entire situation reveals extremely poor planning and a serious lack of advanced reconnaissance. 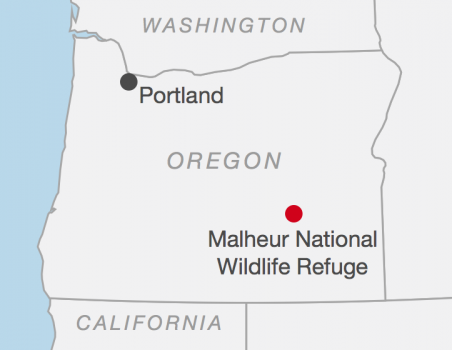 The middle of nowhere.

Anybody that has ever spent more than a few days in rural Oregon, East or West of the Willamette Valley, knows that you don’t just show up and plant your flag – regardless of the reason. Anti-government sentiments run strong in these parts where almost every household owns at least one firearm. However, a distrust of outsiders will trump this position every time. These are small, tight knit communities that have roots going back several generations. Simply put, a group of foreign radicals will not be accepted or tolerated under any circumstance.

Ammon Bundy and the rest of the good time gang were quickly told to leave town and subsequently arrested. At the end of the day, on January 26th Robert Lavoy Finicum was shot and killed by federal agents as he attempted to leave the refuge. As of this writing, only four holdouts still remain at the Wildlife Preserve. They are surrounded with only two choices: either surrender or suffer the same fate as Finicum. 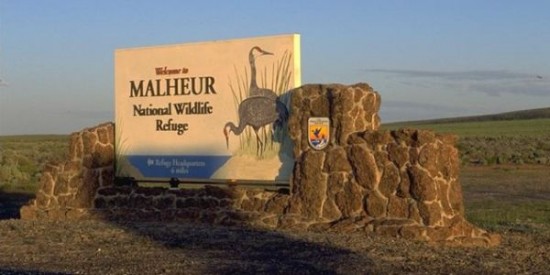 Certainly, it is an inherent right and duty as an American to keep the Federal Government in check, more or less in perpetuity. The important thing to keep in mind is that in order for a revolution to truly succeed, the majority of the people must be in favor of it. Another necessary ingredient is that it needs to have capable leaders.

George Washington led a band of starving rabble to victory. Not by luck and not by rhetoric. He did it with skill and cunning. The crossing of the Delaware was born of desperation, yet executed with genius. Occupying the Reserve, was a strategic blunder from the word go. When attempting to make a point by force of arms, it is vital to have a plan of attack. Equally imperative is a plan of retreat. Washington spent far more time withdrawing then attacking. For that matter, so did Castro and Guevara.

By virtue of the fact that the “Patriots” blindly assumed they had public opinion behind them, they were doomed before they even began. Sure, the average American in their heart of hearts would have a problem with millions of acres under Federal control. Where we have a bigger bone to pick is with the suggestion of our presumed allegiance to half baked insurrection. There were not too many tears shed nationally over the death of Robert Finicum, despite allegations of a cover up. Although there are recent reports that as many as a thousand people may attend his funeral,this is still a very small percentage of overall citizens. In this country, we love our outlaws, but we have no time for professional victims.

Update 3/8/16 It has been about a month since the Bundy’s came to town, and were summarily arrested and in the case of MR. Fincum, shot down on the side of the road. Of course, from the get go somebody was bound to take a bullet.As Americans we not only liked but loved Bundy’s 1. This had grit this had dash with spittoon sentiments. The evil revenuers were chased off back to Washington D.C. or Newark Delaware. Retreating to somewhere with long zip codes and dubious regulations. It was a hats off boot kicking good time for all. Then came Bundy’s 2.

Right away there were scattered reports of a wild cat writers strike. Leading to two bit scab hacks,smuggling tainted garbage to the directors and producers of this one trick pony revolution. The script was suppose to read, “Endear your selves to the locals, and promote good relations.” Not “Immediately alienate the townies and doom this ill conceived insurrection.”

In the end the B list actors of this straight to video train wreck, did just that. In short order the areas concerned citizen’s let it be known that they had grown weary. There was no more patience for the patriotic circus in the back forty. In a not so obvious way, they basically said” Um, yeah. Somebody should probably shoot these wierdos because they’re scaring the kids, and its bad for the tourist come spring time.”
Which is just about how it came down. The media tried to run with the whole pending anarchy scenario, but in the end there just wasn’t any. Hard to catch a glimpse of old Ammon and crew these days in the headlines. I here it can still be found on You Tube. But you have to pay if you want to watch it in English.
Update 3/10/16 Ammon bunny and twenty six others charged with additional crimes including but not limited to “Mopery with aggravated intent, and public display of intellectual deffication’. 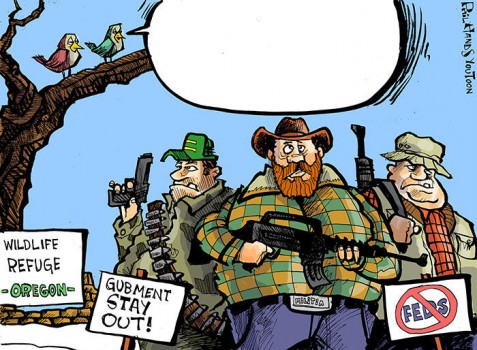