Trending Now
You are at:Home»Current News»Santa Barbara’s Wildlife Is At Risk

Santa Barbara’s Wildlife Is At Risk. 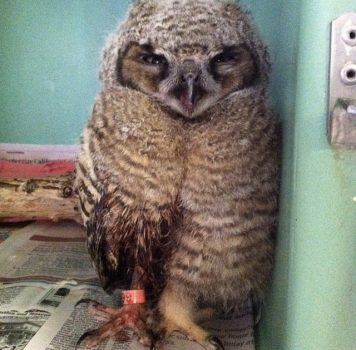 There is a silent killer affecting California’s predator population: rodenticide. If consumed by top predators, such as the native red tail hawk, rodenticide leads to illness, chronic disease, and death. Without healthy numbers of top predators, the health of an ecosystem becomes increasingly compromised. It is imperative that we find ways to deal with perceived pests without harming the creatures we cohabitate with.

What Are Rodenticides? And What Are The Consequences of Rodenticide Use?

Sightings of nearly hairless or starving wildlife have become increasingly common in Santa Barbara and surrounding counties. Wildlife, such as coyotes and bobcats, who have ingested poison become immune-compromised and may become infected with sarcoptic mange. Prior to widespread use of rodenticides, big cat populations in the region were not significantly affected by mange. Now mange is a common occurrence.

Rodenticides are rodent specific poisons that include first and second generation anticoagulant and non-anticoagulant poisons. Anticoagulant rodenticides kill rodents by causing hemorrhaging and death. Rodents that are poisoned die slow, painful deaths that can take up to a week. Non-anticoagulant poisons are neurotoxins that cause paralysis, seizures and death. When the intended recipient of these poisons is weakened or dies, other animals and scavengers are vulnerable to secondary poisoning through predation. Many farmers and homeowners feel that the use of rodenticides is the only effective way to deal with pests. However, supporting natural predation and rodent proofing structures has been shown to be highly effective in deterring pests. Some legal restrictions regarding anticoagulant poisons have been implemented, but public access is still widespread and, contrary to popular belief, there are no safe rodenticides. Studies have shown that up to 73% of California wildlife tested has been exposed to these types of poisons. Local environmentalists claim that a healthy population of birds of prey are more effective than use of poisons. Individuals concerned by the use of rodenticides have alternative options including installing nesting boxes on their properties or using live traps. 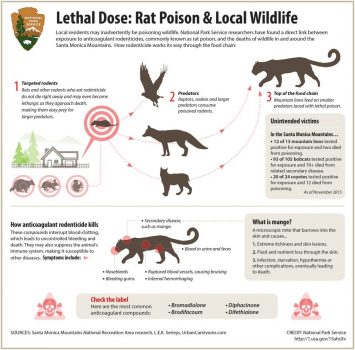 What Are The Alternatives?

Barn owls consume around 4-6 small to medium sized rodents each night. Building nesting boxes in trees and perches close to houses, properties, and farms affected by pests are effective ways to control rodent populations. Local biologist and volunteer wildlife rehabilitator, Colleen Del Vecchio notes the difficulty of the wilderness/urban interface that communities like Santa Barbara face. Vecchio suggested that, “personal upkeep of properties, tree and bush trimming, and limiting the buildup of woody debris” is helpful for pest prevention and healthy cohabitation. Use of electric, snap traps or live traps is recommended as an alternative to poison. Preventing access to food sources, such as vegetables in gardens or improperly stored animal food is also helpful. Cohabitating with rodents, if possible, is a praiseworthy endeavor. Mice and rats serve as an important part of ecosystems, by providing a source of food for other animals, eating insects and aerating soil. Rodent control is not an easy pursuit, but the damage that rodenticides are doing to the predator population (which is nature’s pest control!) is inhumane and unsustainable.

There are numerous environmental issues we face today, global and local, and it can be difficult to decide which causes to focus on. The risks posed by rodenticide to wildlife, pets, and even children, are significant enough to warrant real concern. We can all make a difference by eliminating rodenticide and choosing safer alternatives.