Trending Now
You are at:Home»Current News»Community»Speaking Up Pt. 1 : Systems of Oppression and Racism in Academics

I recently had the opportunity to speak with Dr. Donte Newman and Dr. Carrie Hutchinson, both professors of communications at Santa Barbara City College who work together at the consulting firm they started, Ally to Accomplice. Dr. Newmans’s research is focused largely around the idea of aversive racism and impression management and Dr. Hutchinson has committed her research and professional practice to antiracism education and strategies. Together we discussed the complexities of systems of white supremacy and ways to challenge these systems.

As a white-passing Person of Color (POC), I recognize that it’s my job to educate myself, and my discussions with Dr. Newman and Dr. Hutchinson allowed me to gain new perspectives and terminology that I hope will make me a better accomplice to POC.

I asked Dr. Newman and Dr. Hutchinson how systems of white supremacy influence people’s ability to speak up against racism.

Dr. Hutchinson believes that some white people are afraid of dismantling systems of oppression, so they aren’t as active as they should be out of fear of losing the privileges it affords them. “It is deeply seeded and they’re not fully in touch because one of the reasons they’re not doing as much is because they feel they have something to lose in terms of their own power.” Dr Newman adds that individual oppression, ideological oppression, and institutional oppression, inhibit POC from speaking out against racism. 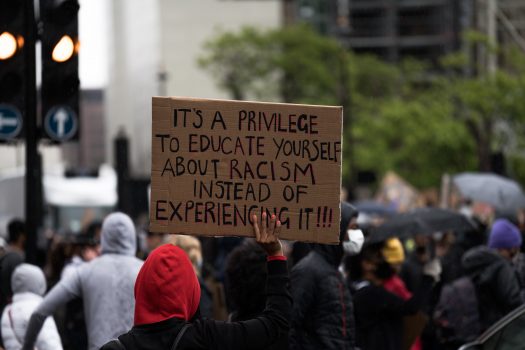 Individual oppression can happen in conversations between POC and white people, where the white person uses oppressive language and racial microaggressions, described as “the everyday, subtle, intentional — and oftentimes unintentional — interactions or behaviors that communicate some sort of bias toward historically marginalized groups.” These interactions are common ways of silencing POC. Microaggressions can be anything from telling a POC, “You speak English so well,” or “You’re so articulate,” to asking, “Where are you from? No, where are you really from?”

Ideological oppression, on the other hand, may occur in situations where a person has biased beliefs about POC. For example, a white professor who has negative beliefs about Blackness and Brownness treats students differently based on these racialized assumptions.

In education, when we look at things like opportunities, achievement rates, grades, and dropout rates, there are often differences between racial groups. With ideological oppression, this can be blamed on deficits in individuals and groups, when in reality the problem lies within racist beliefs and ideas.

Finally, institutional oppression is centered around the policies, procedures, and laws that are embedded within our institutions and have the explicit aim of oppressing Black and Brown people. Dr. Hutchinson explained that this system is designed to silence and keep silent any opposing voices. Institutional oppression upholds the entire system that we have in place.

many white people have fears of saying or doing something wrong, so instead, they remain silent. “

I asked Dr. Newman and Dr. Hutchinson about how students can speak up against racism in academic settings.  Dr. Hutchinson believes that everyone is aware of racism and “often pretend to be surprised by the severity of it.” This is the case, particularly for white people because “we don’t have the lived experience. We can’t always identify the severity of the problem.” She explained that many white people have fears of saying or doing something wrong, so instead, they remain silent. When it comes to speaking out against racism, we “have to convince ourselves that doing it imperfectly is better than not doing it at all.” 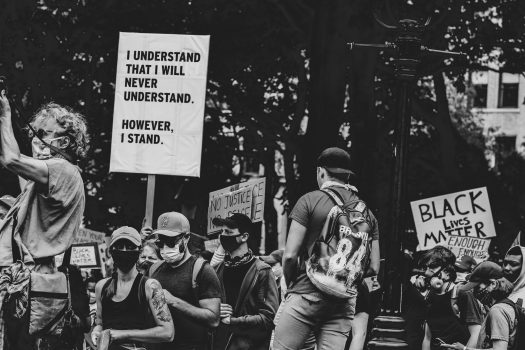 When a student experiences racism with an instructor, Dr. Newman stresses that students can bring the situation to the professor’s attention, but he advises his students to do it by email and not in class. Dr. Newman suggests that students can go to the Dean or the Chair or other powerful people who the student know will support them. When confronted, some instructors will get defensive, “They’re not going to have a sudden awakening of, ‘Oh you’re right, that is a white supremacist ideology,’  ‘Oh my gosh, I’m so sorry.’ They’re never going to do that. They’re going to defend themselves; they’re going to deny ever saying that –– because of the power dynamic in that situation the professor now turns the class on you. Now everyone in the class is going to side with the professor because –– you know why –– the professor is grading their work.”

Dr. Newman advised that students be aware of the unintended consequences that may arise when confronting a professor. He mentions that if a student is a Person of Color on a predominantly white campus, then they are in classes with predominantly white students who might not understand what racism is to them, so this is why students must be careful speaking out against professors publicly.

When white students witness racism in a classroom, it is their responsibility to try and mitigate situations as a bystander. If a Student of Color is a target, Dr. Hutchinson doesn’t believe it’s the student’s responsibility if they don’t feel comfortable coming forward because “historically, when people have done that, they have been the ones who suffer.” In my personal experience as a white-passing POC at Antioch University Santa Barbara, I have felt comfortable going to my professors in situations where I have noticed bias or racism. This may not be the case for everyone and that’s why I feel it’s important for me to speak up when I can.

At Santa Barbara City College, Dr. Hutchinson also believed the responsibility to confront racism lies with faculty and administration. She offers training for all SBCC faculty called “Online Teaching With an Equity Mindset” and offers a free course for all community members through the School of Extended Learning called “Building an Equity Mindset. One tool she offers is for faculty to implement anonymous feedback forms throughout the entire semester or quarter or term so they can gain anonymous feedback from students. This is similar to Antioch’s Mid and End of the Quarter feedback forms that allow students to provide feedback to their professors and the institution. This gives professors the opportunity to learn and grow and develop more inclusive learning environments.

Tell me why it’s racist, help me understand? “

Dr. Newman reiterates that in spaces where someone is accused of racism, the focus should be on changing behavior. The accused should handle the situation by asking questions like, “Tell me why it’s racist, help me understand?” instead of fixating on whether or not they are a good or bad person. We have to listen and acknowledge. Depending on a person’s racial identity and position, the way they address racism can be different.

As a student and a white-passing POC, I believe that I must use my privilege to confront racism when it is present. There are many systems of white supremacy that influence white and POC’s ability to speak up against racism. In academics, as well as everyday life, I and others with privilege have a responsibility to not stay silent. In the next segment of this two-part article, I will continue to explore ally and accomplishment, systems of white supremacy, and the Black Lives Matter movement.