Trending Now
You are at:Home»Current News»Community»#StudentsAtAntioch for Social Justice

Saturday May 23rd Johan Lohman, David Arnet, Marius Salzman, Dennis Pater, and Ahmed Hassan from Antioch University Santa Barbara hosted a soccer-tennis tournament for charity. The purpose of the event was to raise money for the Foodbank of Santa Barbara, who is working to provide nutritious food for the less fortunate in the community. Using the right strategy allows the food bank to provide 8 healthy meals for the cost of just $1.

Even though I have not played soccer since high school I decided to put up a team and join the tournament. Neither had my teammates or I played the game of soccer-tennis before, but we were very excited. When we showed up at Leadbetter beach Saturday morning, the guys had already set up the field, put some music on and was playing around. The weather was perfect and we enjoyed a beautiful day at the beach together with good friends. 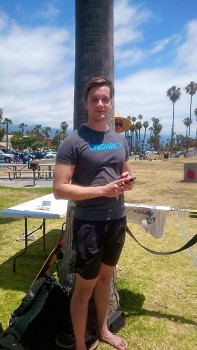 The guys started playing the game at the beach just for fun a couple of months ago, but the idea of creating an actual event came along as they were taking the Service Learning class at Antioch. This course provides students with the structured opportunity to intern at a local nonprofit organization while reflecting upon their service learning in a weekly classroom setting. All students at Antioch are required to take the class and through the quarter volunteer at least forty hours for a chosen non profit organization. Johan Lohman explains the guys decided to volunteer for the Foodbank after meeting with Melissa Howard, the community leadership coordinator, who told them about the wide range of different areas in which they could work: web design, social media, and public relations. The idea of a soccer-tennis tournament seemed perfect as the game itself is fun, but also popular among the international students in Santa Barbara.

After the guys decided to arrange the event for the food bank, they spent 6 weeks planning and developing it. Depending on interesest the they divided the tasks between them; some were responsible for social media, others worked on posters for the event while some worked out the details of booking locations and making sure all the needed equipment were available. Everything was running smoothly until they figured it would cost them more to book the location that what they aimed to raise of the event itself. “This was a minor set-back, but we went down to the beach and found a public space that was suitable for hosting the tournament, so luckily we did not need to book the special location that we first were looking at,” Lohman explains. The only concern was weather the public space would be taken or not the Saturday of memorial weekend, but the boys were up early to ensure the rest of us a perfectly fun and sporty day out in the sun. 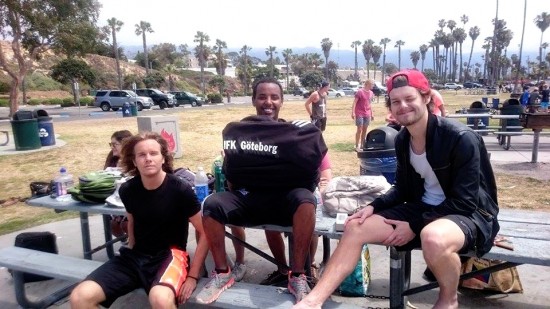 Fred Ligaard, Ahmed Hassan and Dennis Pater cheering for their friends and Göteborg

Unfortunately, two teams dropped out of the tournament just a couple of hours before the event and the boys ended up raising less money than expected. Yet they managed to raise $200, which will provide 1,600 healthy, nutritious meals for the less fortunate in Santa Barbara, but the guys have already  an idea of how to make the $200 into something more; they are planning on investing the money in another project, which is a raffle with good prices. 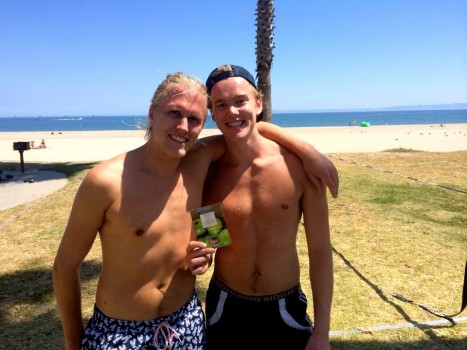 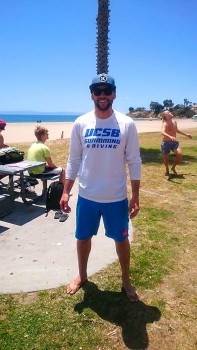 Various organizations in Santa Barbara might be willing to sponsor the raffle depending on the price of the tickets and how many tickets the guys predict to sell.  David Arnet, who came up with the idea,  has the opinion that a lot of the companies and organizations in Santa Barbara have a very philanthropic mindset. The idea behind the raffle is to get people to buy tickets by providing fabulous gifts as iPad, sound system, SB Zoo passes, gift cards at different wineries, and also some kayak or paddle-board rental gift cards. The Santa Barbara Zoo has already confirmed they are willing to donate some season passes, and the guys are in talks with some other companies as well.

The projected earnings from the raffle is of $500 – $3000, depending on the prizes they collect and how many tickets they sell. Their goal is to  raise $2000-$3000, which will sponsor between 16,000 to 24,000 meals.  This could be translated into more than twenty unique individuals getting 3 meals a day for over a year.